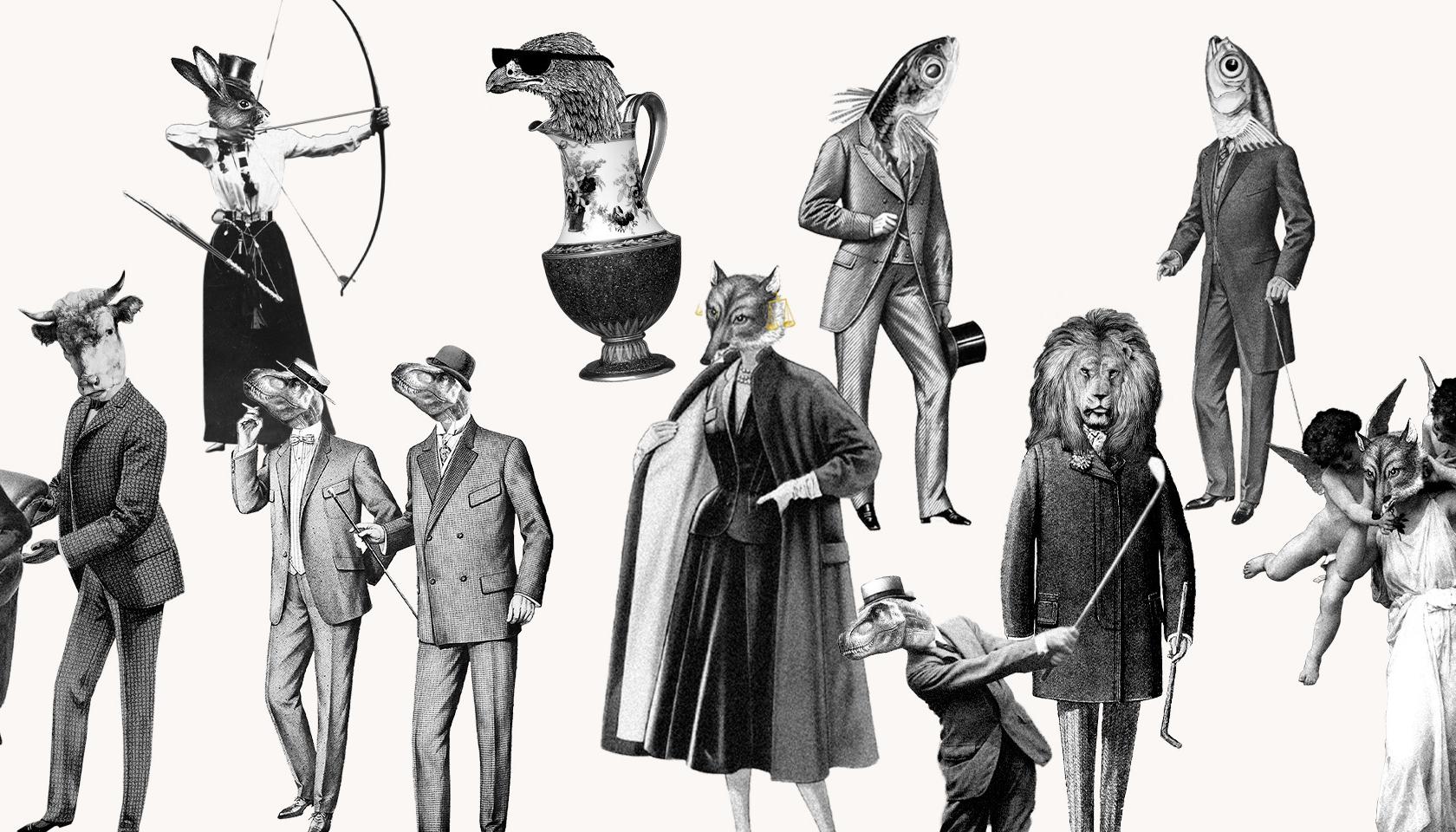 One of the great minds of the early oh ohs, Paris Hilton, might have been serenading that the stars are blind, but we beg to differ. We’ve seen way too many emotional Pisces and indecisive Libras to buy into that. Forget about whether Geminis are really two-faced or just flexible, though. Everyone deserves to be gifted the perfect Spirit.

Sure, maybe the Scorpio in your life loves Bourbon but what if they were actually destined to be a Tequila aficionado? We’ve broken down the ‘science’, and we’re here to tell you which Spirits are written in the stars for each Zodiac sign.

Align your chakras, grab your crystals, and check out the list of the Spirit animals for all zodiac signs (yes, even for the perfectionist Virgo in your life).

Disclaimer: All the character judgments below are objective scientific facts, based on extensive research, and do not necessarily represent our feelings about Zodiac signs.

Ah, the first sign of the zodiac. Aries absolutely adores being numero uno. To nobody’s surprise, Mariah Carey is an Aries. This sign is bold, ambitious, and audacious. An Aries will do anything on a dare and they love trying the unorthodox things in life.

Your Aries will feel the most seen when gifted something like a premium Swiss Absinthe. Fortune f(l)avors the bold and back in the day, only the boldest would dare to try the potent potion that was banned in the U.S. for over 90 years. Today, we know the claims of hallucinations were false — that is if you don’t chug down the whole bottle — but it still takes a daring Spirit to pick up a bottle of the green fairy. La Clandestine Absinthe comes from a small mountain distillery in the birthplace of Absinthe. Sure, you probably think bright green when you hear the word Absinthe, but the finest ones are actually clear. Those “in the know” call them “blanche” or “bleu”.

The silvery clear liquid in question is complex and sweet with wonderful fennel notes that don’t need to be savored with the customary spoonful of sugar.

If you’re blessed enough to have the calming and soothing presence of the grounded Taurus in your life, you know these cuddly creatures are not lazy but rather laid back. They won’t deny that their dream job would probably be sleep study participants, though.

We see your Taurus living their best life, slowly sipping Rum on a sandy beach. Or, you know, their cozy couch. Let them know you’re totally here for that and offer them Larga Vida XO Rum.

This tropical potion is a blend of 10 Rums, matured in oak barrels between 15 and 24 years and later finished in Ex-Merlot, Cabernet Sauvignon & Sherry casks. The result is more than the sum of its parts - it’s even more complex, balanced, and rounded. In 2020, this soft Rum with notes of vanilla, banana, citrus, and cinnamon, won one of the prestigious Flaviar Community Awards.

Yeah, yeah, Geminis are supposed to be two-faced, flaky assholes that say one thing but mean another. The truth is, though, they mean them all! This air sign is interested in so many pursuits it had to literally go and double itself.

Your Gemini just wants you to accept their fluid nature and what better way to celebrate their duality than with this Rum & Rye hybrid. Hercules Mulligan is a spy that will liberate any palate. Inspired by a tailor-spy who led a double life (Such a Gemini thing to do!) that influenced the flow of the American Revolution, it’s a blend of American Rye Whiskeys and aged Caribbean Rum to which macerated fresh organic ginger from Brooklyn and a dash of bespoke bitters were added. Powerful, flavorful, and rare.

When there’s a slight energy shift in the room, the highly intuitive Cancer will be the first one to pick up on it. This sensitive water sign gets attached easily and loves strongly. You might find them clingy, but they just really care about you.

With their hyper-developed senses, your Cancer probably won’t appreciate a Spirit with a bold nose. On the other hand, a subtle and gently smoky nose of Madre Mezcal will have them proclaiming their undying love for you.

A handmade artisanal Mezcal from the valley of Oaxaca, this sumptuous Spirit is a unique combo of Agave Espadin and Agave Cuishe. With sweet agave flavors and warm and peppery notes, the intuitive Cancer in your life was destined to embark on their Mezcal journey with this traditionally-made fruit of the Zapotec tradition.

Play the fanfare and roll out the red carpet ladies and gents, for Leo has arrived. These kings and queens of the celestial kingdom are vivacious, passionate, and theatrical. The main characters of everybody’s life (or so they would have you believe).

And what does one gift to such royalty? A royal sipper, duh. Shakmat 23 Year Old oughta do the trick and impress even the mighty Leo.

A premium Armenian Brandy from the birthplace of Winemaking, this elegant and exciting Spirit was made with indigenous Armenian grape varieties. Think flavorful abundance with notes of dried fruits, walnuts, cloves, tobacco, oak, vanilla, and a tad of black pepper.

An elaborate spreadsheet might make a scattered air sign run for their life, but the logical and practical Virgo thrives on that stuff. Systematic in their approach to life and a perfectionist, a Virgo loves to live by the rules. Whose rules, you ask? That’s another thing.

Hence, it makes perfect sense your Virgo would go crazy for a carefully crafted Cognac that complies with all the strict regulations in place. Mmm, paperwork.

Frérot Extra Cognac is 100% Grande Champagne a.k.a. the Premier Cru as the aficionados would call it. A blend of Cognacs aged 30 to 50 years, even the most particular Virgo would be impressed by this opulent palate of caramel, walnut, and candied fruits. The lavishly long finish with an extra amount of rancio and a hint of tobacco is bound to knock them off their feet.

The pretty one with good aesthetics in your squad is probably a Libra. Obsessed with symmetry, this air sign’s fixation on balance and harmony goes hand in hand with their inability to decide on, well, anything.

Make your Libra’s life easier and get them the Spirit the stars have chosen for them. Something absolute will do your Libra good, like the most American Bourbon ever. Corn Trooper is a blend of seven Straight Bourbons, coming from seven states. Libras are bound to dig the incredible balance and harmony of a powerful nose and a spicy personality with flavors of maple syrup, oak, cinnamon, vanilla, dark cherry, orange peel, and apple peels.

Scorpio’s proverbially intense gaze that sees right into your soul might be a bit much for some, but this spiritual, dark, and melancholic water sign knows how to deeply surrender to you. Just don’t wrong them or you might get stung.

Take a Scorpio into a bar, leave them there, and find them in the shadowy corner of Scotch when you come back. Son of a Peat BATCH 03 The Redeemer is a wonderfully dark and powerful blend of twelve Whiskies. Combining the peaty magic of Islay, Speyside, the Islands, and the Highlands, this is one diabolical Spirit that’ll light up your Scorpio’s dark
brooding soul.

Fiery, ambitious, and badass AF, the Sag in your life is probably a savvy entrepreneur. All that fire does bring a pinch of recklessness and impulsiveness with it, though. Suggest running off on an adventure and your Sag will no doubt be up for it, but maybe it’s best if you steer the wheel.

Every crazy story starts with a bottle of Tequila and probably stars a Sag as the main character. Embrace the Carpe Diem nature of your Sag and gift them Casa Dragones Tequila Joven. A blend of a Silver Tequila and an extra-aged Tequila rested in new American Oak barrels, this is a complex and smooth Spirit that is ideal for sipping neat (Shots, shots, shots!) or pairing with food.

If Sagittarius is the crazy spontaneous friend of the gang, Capricorn is the yin to its yang: the “mom friend”. Capricorns are super responsible and diligent with a strong sense of duty. That’s all very well but sometimes you just wish your Capricorn would throw their hands in the air and scream ‘partaay’, you know?

Help your Capricorn loosen up and let their hair down at G&T o’clock. Naturally, for that purpose, a fine Gin is in order.

Green Hat Original Batch Gin pays tribute to George Cassiday, a crafty figure who supplied Spirits to the Capitol during Prohibition. Surely your Capricorn can appreciate such business savviness? A true Washington Original, this juniper-forward blend is balanced, fresh, and crisp with lemongrass, herbs, and anise notes leading to a slightly peppery finish that’ll hold great in a G&T.

Clever, intellectual, and full of ideas, this air sign refuses to be put in a box. Kind of like those hipsters who would never describe themselves as hipsters. Just between us friends, Aquariuses are clearly the bohemians and the philosophers of the Zodiac.

Think less Kant and more Diogenes, though, the guy who lived in a Wine barrel at the Temple of Cybele in ancient Greece. Yep, philosophers love their Wine. Starting with their signature small-batch Bourbon, this beauty is aged in new charred oak and finished in the rare Pedro Ximenez Sherry casks. The notes of prune, black raisin, orange peel, and toffee will turn your Wine-loving Aquarius into a die-hard Whiskey fanatic.

And so, we have arrived at the end of the Zodiac. The last sign is supposed to have absorbed every lesson, joy, and pain that was learned by all of the other signs. Is that why these Pisces guys are so wise and sad? Hopeless romantics and constantly divided between fantasy and reality, we can’t help but love these lil melancholic dreamers.

Let your Pisces peacefully thrive in their aquatic fantasy with Mermaid Gin.

Coming in a blue bottle with mermaid scales, it’s just as dreamy as it sounds. Incorporating a botanical called ‘a mermaid’s kiss’ along with 9 other carefully selected botanicals, this unique Gin is a breath of fresh sea air. That’s it, we’ve cracked the code of the gift-giving Zodiac science for you. We hope you found the perfect gift for the Zodiac sign in your life. Did you make your picky Leo happy? Let us know in the comments if they loved their Spirit as much as we think they did!