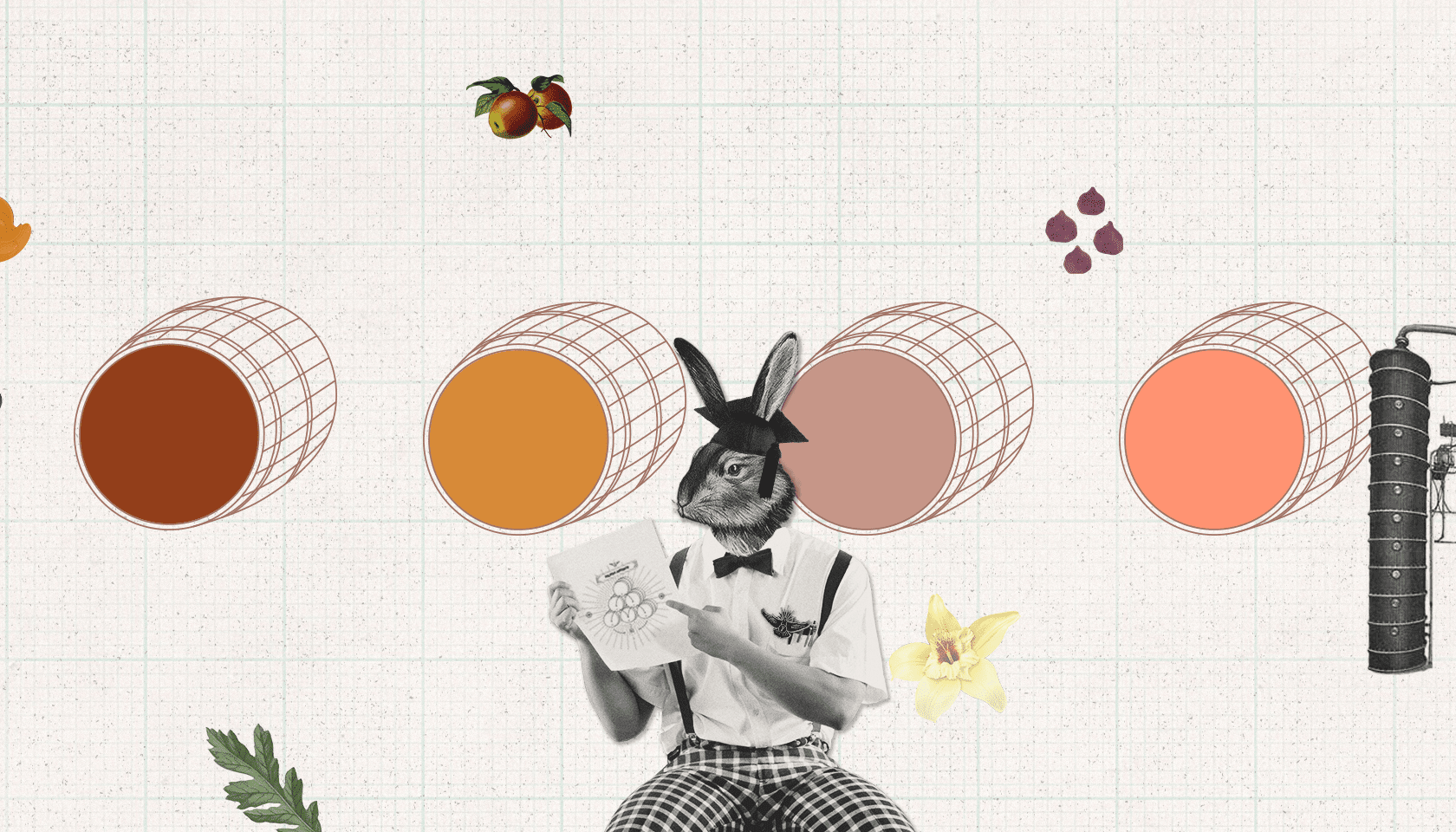 You probably know Scotch and Bourbon are two different animals, and what’s the difference between an Old Fashioned and a Margarita. But how versed are you in fancier nomenclature of hard liquor?
We’ve compiled a list of terms every booze buff should capeesh, so you don’t have to nod knowingly and pretend when someone tells you they prefer VSOP over XO or that they love what Solera does to their favorite Whisky. If you’re already a glossary geek, read the article anyway, and feel smug for knowing all the words.

What is the difference between pot still and column still?

Let’s begin where everything with ABV starts: distillation. To make a Spirit, you can either use a pot still or a column still. Pot still is the oldest contraption that evolved from the ancient alembic alchemical still. It’s more labor-intensive and only produces limited batches, but the Spirit is richer and more flavorful. Generally, aged and crafted Spirits such as Whisky, Tequila, and Rum, are made in pot stills. If you’re making Cognac, Irish/Scotch Malt Whisky, or Single Pot Still Whisky (duh), you have to use a pot still by law.
Column still, on the other hand, is a relatively new invention, about two centuries old. It consists of two columns and operates on a continuous basis, which means it’s cheaper, but the Spirit is purer and of higher ABV. You can also call it a continuous still, or Coffey still, in honor of its inventor, Aeneas Coffey. Grain Whisky, Bourbon, and Armagnac usually drip from these stills. If you wondered why Nikka Coffey Grain Whisky doesn’t taste like coffee, now you know where it got its name.

What does ABV mean in alcohol?

We mentioned ABV a couple of times without explaining it, so let’s do that now. ABV is short for “alcohol by volume,” and it tells us how much ethanol there is in a given volume of booze at 20°C (68°F). Rectified Spirit comes at about 95%, while Whisky is between 40 and 68%. Cool old geezers prefer the historic term Proof, which comes from Elizabethan era England when people determined the strength of their hooch by setting it on fire like some insane badasses. If it burned, it was above 100 Proof or 57%. Do note that there’s a difference between the US and UK Proof. The Americans simply double the ABV, while the Brits complicate stuff a bit, and multiply it by 1.75. 100 Proof in the States is therefore 50% ABV.

What does Navy Strength mean?

If you’re a pirate and test your Rum by soaking it in gunpowder and setting that on fire, you may call a Spirit above 100 Proof Navy Strength or Overproof. Now, if you bottle your booze straight from the barrel without diluting it, you’re making a Cask Strength or Barrel Proof Eau de Vie.
Eau de what? Eau de Vie! It’s French for “water of life,” a generic name for any distilled Spirit. Gaelic for the water of life is Uisce Beatha, which evolved into Whisky. The ancient toga people called it Aqua Vitae, which still lives in the Italian Acquavite and the Scandinavian Akvavit.

What is the difference between aging and maturing?

Then, there’s aging. Or is it maturing? Well, it depends on what you’re trying to say because the terms aren’t exactly interchangeable. Aging simply means a Spirit is getting older, while maturing is when the flavorful magic of transformation happens. The main secret ingredient is wood, which is a medium for scents and taste. It imparts flavors and aroma unto the water of life through chemistry and whatnot on an Ant-Man level.

VS, VSOP, XO Cognac - what does it mean?

With Cognac, age is such a big deal, they came up with three official categories and a couple of unofficial ones. As per the Bureau National Interprofessionnel du Cognac, V.S. stands for Very Special Cognac, where the youngest brandy in the blend is at least two years old. For V.S.O.P. (Very Superior Old Pale), it’s at least four years, and for a Cognac to be XO (Extra Old), its youngest Spirit has to spend at least a decade in a cask. Now, the grades non officiels: If your Cognac is at least six years old, it’s called Napoleon or Extra. Our Frérot Extra is such a beast, but it also has Brandies that are 30-50 years old. To get an XXO Cognac, the youngest eau de vie in the blend must be at least 14 years old.

What is the difference between Blanco, Reposado, and Añejo Tequila?

Tequila has a simpler approach. If it’s aged between zero and 59 days, it’s called Bianco or Silver Tequila because it’s colorless. Above that, it’s Reposado (rested). Tequila that rests in oak for more than a year is Añejo, and if you wait more than three years, it becomes Extra Añejo. If you blend non-aged and aged Tequilas, you get a Joven or Gold. Pro tip: always check the quality of a Gold Tequila as it may be colored with caramel to fool you. The safest bet is to go with a Reposado if age is important to you.
But what if you get a bottle of Scotch and it doesn’t tell you how old it is? Then you’re either dealing with a bottle that has manners or with a no-age-statement (NAS) Whisky. The reason for secrecy is the supply of aged Whisky couldn’t match the demand (you can read more about it here), but an essential thing NAS taught us is age doesn’t necessarily mean quality.

Wood is also the star of another amazing sorcery, called finishing. No, not the one from Mortal Kombat, but the kind where you put a mature Spirit in a second or third cask to sophisticate it even further. Technically, it’s called “second maturation,” and it adds complexity. Most popular finishing casks are those that once held Sherry (Oloroso and PX, anyone?), Port Wine, Bourbon, Rum, and even Tequila.
In other words: aging is just getting grey hair, maturing is reading poetry, and finishing is going on vacation abroad.

What is Solera method?

Let’s not forget the intriguing maturing process called the Solera method. Solera, or “on the ground” in Spanish, is when you blend the Spirit in fractions using a succession of barrels with different ages. The oldest juice is on the floor, and when you bottle it, you replenish the missing liquid with the next oldest, and so on down the chain. The final product is a mixture of ages, and the average age gradually increases as the process continues over many years. The most popular Whisky that goes through this process is Glenfiddich 15, which is married in a Solera vat. 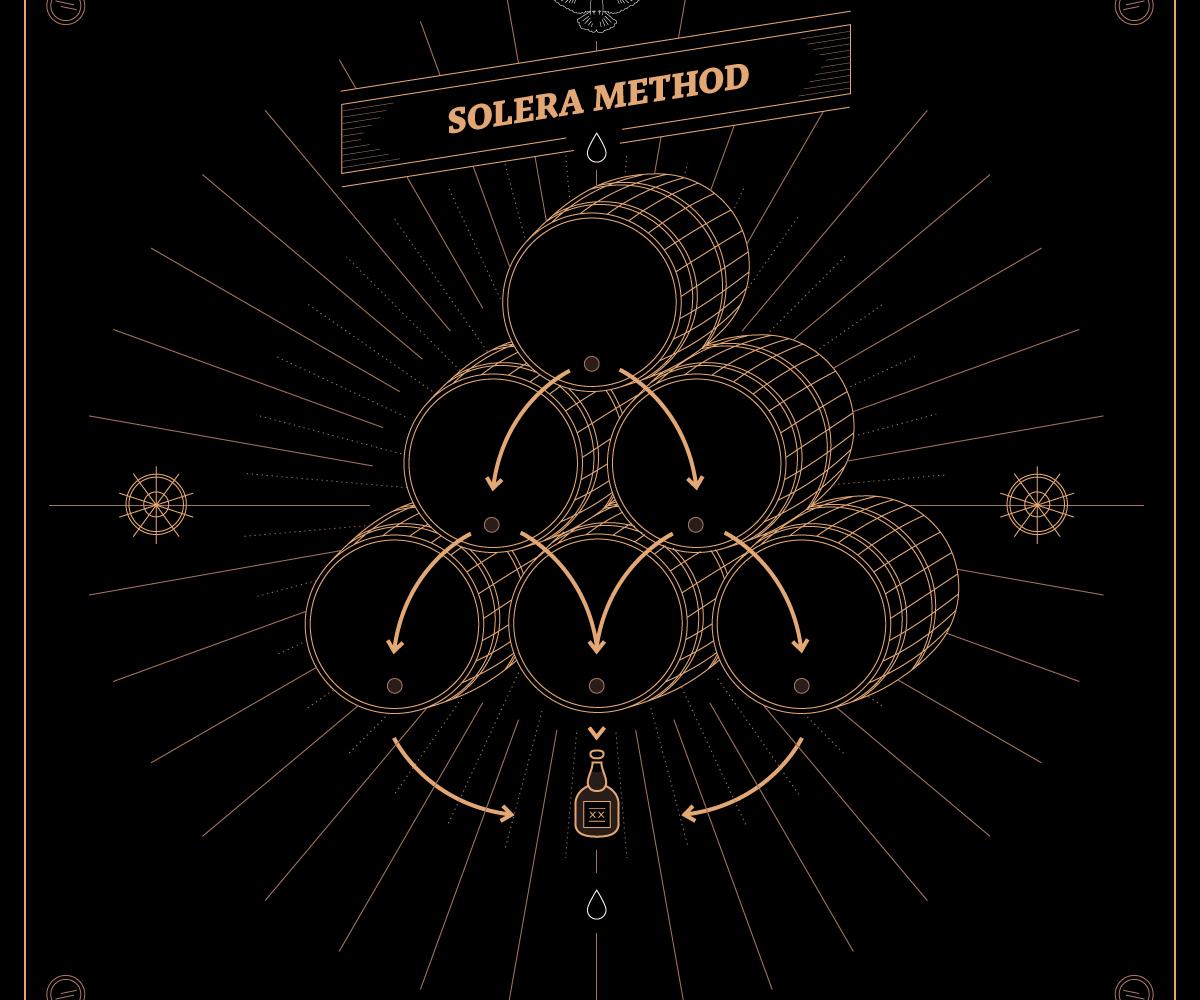 Whisky gets married?! Yes, and it means exactly what you imagine. When you marry a Spirit, you blend it with another one and bottle it as a single expression. An expression, by the way, is a different version of the same Spirit. Fool around with the proof, age, or cooperage, it becomes a new expression.

What is the difference between dry, wet, dirty and burnt Martini?

Let’s finish our terminology course with cocktails and serving terms. Now, a cocktail is a mixture of Spirits and other ingredients (bitters, sugar, and water). If you throw water or a carbonated beverage in your Spirit, it's a Highball. A Spirit and a Liqueur make a Duo. Bitters are a potent infusion of botanicals, spices, and herbs. But be careful with that; you only need a dash. That’s about ten drops.
If your Martini (Gin and Vermouth) is dirty, it has a bit of olive brine in it. If it’s dry, it means less Vermouth. Wet, then, means there's extra Vermouth in the glass. Stirring is the correct way of making Martinis, and shaking is the Bond way. James likes it diluted. An overshaken cocktail is bruised. Throw a cocktail onion in your ‘Tini, and it becomes a Gibson. If you’re adventurous and add a splash of Peated Scotch, you get a Burnt Martini. If your cocktail comes with a twist, there’s a thin piece of citrus peel included.
Fancy a simple Gin and Tonic or Rum and Cola, but want to sound fancy (and kinda vague)? Say you’d like a One on One. If you’re the designated driver, get yourself a mocktail. Yup, that means 0% ABV for you.

How do you serve drinks?

A neat Spirit is served straight from the bottle, unbesmirched, but if it’s on the rocks, there’s ice in it. (I hope you appreciate our restraint in making a Vanilla Ice joke here.) If you see trails on the side of the glass after you swirl your dram, you’re witnessing legs (or tears, if you’re French). This phenomenon involves evaporation, and a thing called the Marangoni effect. There’s a lot of bickering among the drinkers about what legs actually mean, but one thing is certain: the higher the ABV in your glass, the slower the legs are. Which is also true for humans.
There you go! If you remember these terms, you can consider yourself a bone fide Spirits smartass. Which one’s your favorite? What term was new to you? Is there a term that should be included? Leave us a comment.
Read more about:
Published Mar 25th 2021
By Saso Braz