Give Thanks with Whisk(e)y 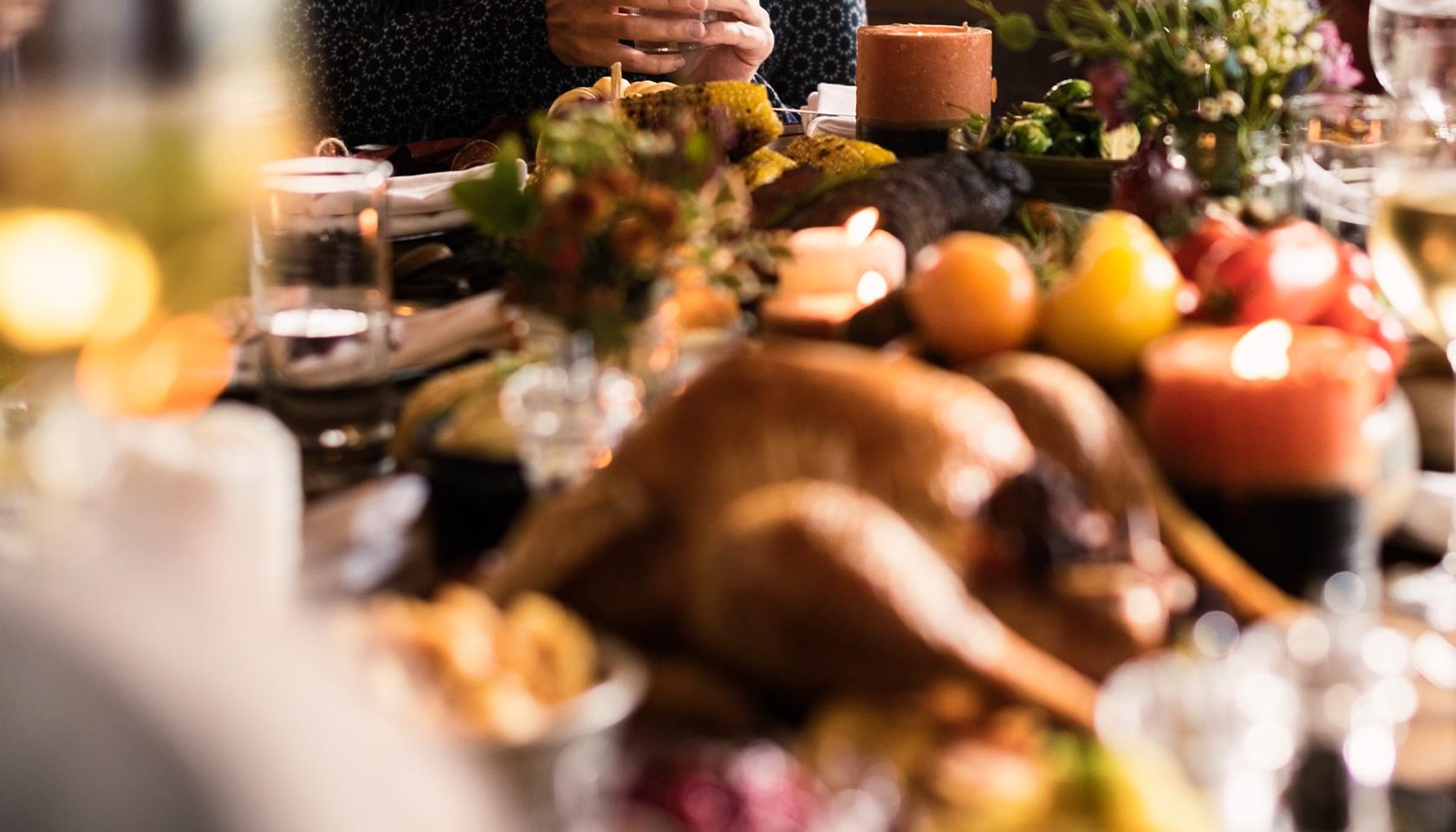 Yeah, friends and family can be annoying, but you are there no matter how hard they might make it because you love them. Or at the very least you like the food they cook. That's what Thanksgiving basically boils down to. Sprinkle some extra care and affection on the celebration with something near and dear to your dram.

There's a whole array of delicious Whisk(e)y-s to go with Thanksgiving dishes. Invite your guests (or hosts) on this juicy journey! Who knows, you might even find a future fellow Flaviarista in your fam to fan over bottles with.

In general, your best bet is to pair Whisky with dark chocolate, cheese, seafood, meat, and desserts like pies. But that is just a rule of thumb.

Here’s how you can use your Flaviar-acquired Spirits knowledge and up the ante this Thanksgiving.  To help you get started, here's how we would combine the Liquor with the dishes.

Wow, we have the holy trinity of American taste here. Bourbon is a beautiful companion of the 2 Thanksgiving icons thanks to its American oak-aging. The secret lies in the subtle sweetness and smoothness that compliments the poultry and the pie perfectly. A glorious blend of seven Straight Bourbons from seven states. The harmony of Bourbons has a powerful nose and a spicy personality with notes of maple syrup, oak, cinnamon, vanilla, dark cherry, orange peel, and apple peels. Not only is Corn Trooper Flaviar Member's favorite, but it also received Gold Medal at San Francisco World Spirits Competition 2021.

If you are looking for something to amplify your Thanksgiving dinner experience, Corn Trooper is your go-to dram.

It’s made from their core mash bill of 75% corn, 13% rye, and 12% malted barley aged eight to ten years in new white oak casks with a dark, #4 “alligator char” — it’s ready when it’s ready and not a moment before. It’s absolutely single-barrel stuff. Also a double-gold medal winner and rated 96-100 points by Wine Enthusiast.

The Russell’s not only distilled Bourbon for Campari, but they also get to taste and match casks too. They set aside — reserve — the best casks of aging Bourbon to create Russell’s Reserve 10 Year Old. The formula is simple and classic — a solid mix of corn, wheat, rye, and a dash of barley distilled and aged a full ten years in dark #4 char, white oak casks. Awards? It’s got nine of them, including a rare double-gold medal in San Francisco.

2. We’d pair Rye Whiskey with cranberry sauce. This is why.

Welcome to the spicier side of drams. The exuberant savoriness and spice of Rye Whiskey balance out the sweet-tasting sauce. Here are our top three picks for your cranberry sauce escort. The key to this unique flavor character of WhistlePig 12YO is in the combination of the casks. After spending 12 years in new American oak casks, it is then finished in three European wine casks: Madeira, Port and French Sauternes.

Rittenhouse Straight Rye is bottled in bond, which means that it is a product of a single distillery, made in a single season in a single year. It is aged for at least four years and is mostly made from Rye mash. Recently updated with a 1930’s label this Rye Whiskey is a monumental creation.

A side dish with main character energy goes well with the earthy, smooth flavor profile of Irish Whiskey. It brings out the savory creaminess of the ingredients. What a combo! For maximum effect, go for one of the expressions listed below. Redbreast Single Pot Still Irish Whiskey 12YO is one of two Whiskeys on the market that are 100% single pot still Irish Whiskeys. It’s this — the process of making Whiskey in a copper pot still — from both malted and unmalted barley, that makes this Redbreast unique. It’s highly regarded as one of the best (if not the best) Irish Whiskeys, by notable critics and laymen alike.

Green Spot Single Pot Still bears no age statement and is composed of Pot still Whiskeys aged from 7 to 10 years. The Whiskey has been matured in new casks and ex-Bourbon barrels, as well as the ones that contained Sherry. This much-appraised drop of Irish Whiskey has become a cult favorite.

The core Jameson’s Whiskey Spirit comes from a single distillery in Cork, Ireland, but uses a unique mixture of triple-distilled grain and pot-still spirits aged seven years in a combination of ex-Bourbon and ex-Sherry casks. Jameson Black Barrel Irish Whiskey takes the extra step of re-charring the Bourbon casks ("black barrel," get it?). This diminishes the Bourbon influence and adds a more natural, vanilla character.

3. We’d pair Unpeated Scotch with stuffing for this reason.

A lot goes into the stuffing and the recipes get as complex as the flavor. To compliment that, get some good single malts in. An unpeated, dry, non-smoky Scotch will do right by the stuffing's character. In the perfect world, we’d drink all of the below this year. The Macallan has been creating Single Malt Whisky for so long at such a high volume and such a high level that they have what sports teams call a very "deep bench." The Macallan 12 YO Double Cask is their classic Single Malt aged a full twelve years in both American Sherry and European Sherry casks — without a Bourbon barrel insight. The American side brings citrus and vanilla notes while the European side brings flavors of caramel, oak spice, and fruit.

Auchentoshan Three Wood is a no-age-statement Scotch, which is aged in three different cask types. First in Bourbon barrels, next in Spanish Oloroso Sherry and finally it's moved to Pedro Ximenez Sherry casks. The final maturation gives it extra nuances and a layer of very intriguing flavors, resulting in a dangerously drinkable dram.

This very bottle is the epitome of class and quality. It's aged for at least a decade in ex-Bourbon barrels and after that, it's double-barreled for extra two years in upscale casks that used to hold sweet French wine Sauternes, which makes it as ritzy as F. Scott Fitzgerald's diamond. The voluptuous "Nectar of Gold" is creamy and sweet and it earned a score of 95/100 from Wine Enthusiast, and 94 points from the legendary Jim Murray's Whisky Bible.

Bites of a flavor flock together. The full-bodied and fabulous meat in the gravy goes great with the peat while the gentle mash potatoes balance out the smokiness. Talk about autumn on a plate. Combined, a slow fermentation (between 55 and 75 hours), slow distillation (around 5 hours for the first distillation and more than 9 hours for the second) and long maturation ensure that Lagavulin develops all of its long, rich and peaty characteristics. It's the Quintessential Lagavulin. Take it, run, and don't look back.

Talisker 10YO is a true house representative that sticks to the distillery's definition of what their Single Malt should be all about. It just delivers that smoky soul from the beginning to the end. A wonderful expression that is just a great intro to what Talisker has to offer.

The folks at Laphroaig call Lore "The Richest of the Rich." And it's easy to see why. This is a classic Islay-styled Single Malt Whisky to be sure, but they go a little beyond the normal. The name Lore comes from the very old-school production methods. The peat is hand cut. The malt is hand turned and cold-smoked. All of this harkens back to how they did it decades ago. The results are impressive.

5. We’d pair Canadian Whisky with sweet potatoes. Hear us out.

You know these Canadians are usually sweeter than Americans; something similar goes on with Whiskey. The majority of them are corn-based, therefore similar to Bourbon expressions, contrary to popular belief. Sweetness connects the two staples and you’d be missing out if you don’t give one of these fine tipples a go. Crown Royal XR is all produced in one spot, at the small-batch LaSalle Distillery on Montreal Island, and the “where” makes all of the difference indeed. All the folks in Canada have known for years that there is something about that spot makes the Whisky a tad bit smoother, and a tad bit sweeter.  It is light and smooth and spot-on spicy in all of the right places, an embodiment of what Canadian Whisky really should be.

The name alone has just about all the information that you need to know. This is a ten-year-old, Canadian-style Rye Whiskey that has spent the last several months of its aging in ex-Rum casks. This is a recent change for Pike Creek. The first version of their signature spirit was finished in Port casks. The change brings a bit more sweetness and lets the Whiskey have more of a savory richness.

Lot No. 40 Canadian Whisky started as one of the "Whisky Guild" series of special, limited edition Spirits. It was a small-batch, blended Rye Whisky produced for lovers of Whisky and Whisky history. It was produced in the old-school, pre-Prohibition style, served at 43% ABV, and named after the plot of land owned by one of the founders — "Lot No. 40." With the incredibly popular resurgence of Rye Whisky in the marketplace, Pernod Ricard encouraged the re-launching of the Whisky as a stand-alone brand in 2012.

"Every fall, my Uncle Eldred used to build us a maze out of hay bales for us kids to play in. We called it Hay Place. Eldred called it Hay World. Eventually, lawyers were brought in. But that's all behind us. Hay Place lives on!" - Dwight Schrute

Turn this semi post-pandemic pre-holiday season into something truly unprecedented - a fun, relaxing day with all your significant others, including the Whisk(e)y giants and Bourbon bestsellers. It’ll go down easier, just like the tasty food.