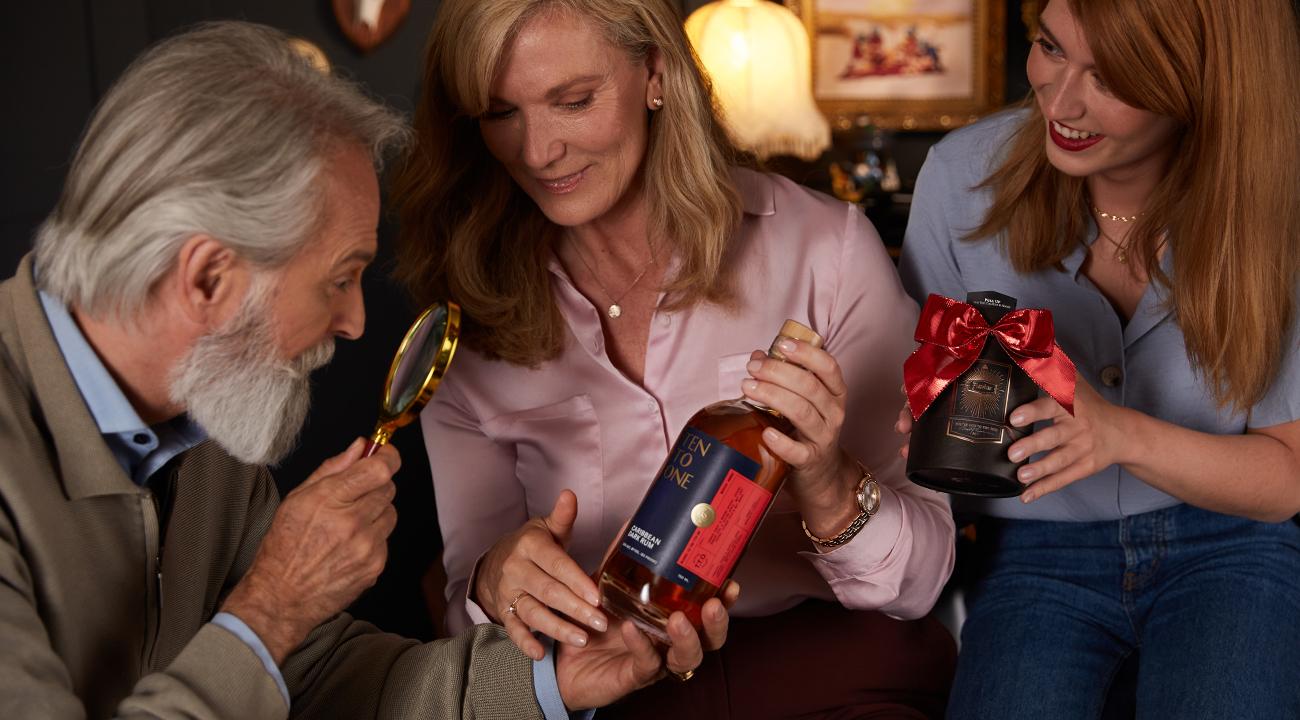 The eleven Rums selected for this guide cover multiple countries; each selected for the unique experience they provide the imbiber and showcase some of the best expressions available.
It is our hope that this list assists you in selecting the perfect present for the Rum enthusiast in your life.
Wish to expand your liquor cabinet without hurting your wallet? Browse our selection of best Rums under $100! Or and check our list of best gifts for Rum lovers.

We warmly recommend Ten To One Oloroso Sherry Cask Finish which is undoubtedly the hot stuff of the 2022.

Ten To One Oloroso Sherry Cask Finish Caribbean Dark Rum is a unique take on Ten To One's award-winning Dark Rum. The masterful blend of Caribbean Rums (from Trinidad and Tobago, Barbados, Jamaica, and the Dominican Republic), named "Best Rum, period," at the LA Spirits Awards, received a finish in Oloroso Sherry casks. This compelling expression is Ten To One’s first special cask finish edition, it’s unique and super limited! It will impress Rum lovers and seduce those who only flirt with the category. Ten out of ten for Ten To One.

Rums from Fiji have been appearing in the U.S. market via private bottling for the past couple of years and in 2020 Maison Ferrand introduced Plantation Isle of Fiji Rum as part of their Signature Blend range. It is created using Fijian molasses that go through a long fermentation process that lasts four or five days.

The Wine is then distilled using a combination of column and pot stills and aged in used Bourbon barrels for two or three years before being sent to France where it is aged an additional year in Ferrand Cognac casks.
The Ferrand blenders add 16 grams per liter of dosage and, if needed, caramel coloring as they blend the Rum to 40% ABV. Moderately priced, this Rum is loaded with flavors that are an easy gift purchase, especially if you know the recipient is a fan of Plantation Rums.

Privateer Rums are produced at their distillery in Ipswich, Massachusetts. Using molasses, they handle the fermentation, distillation, aging, and blending on site.
Over the past two years, they have released several products that have impressed Spirit enthusiasts around the globe. From their unique Distiller Drawer releases, Navy Yard, and Queen’s Share expression the company is considered by many to be one of the best North American Rum producers.

One of their offerings is their New England Reserve Rum. The Rum is created by blending two to eight-year-old Rums with aged water and then recasked in used Bourbon barrels.

After this blending process liquid is allowed to rest in the barrels until it has achieved the desired flavor profile and blended to 45% ABV. This 90-proof dynamo is remarkably versatile and a sure-fire hit for any gift-giving occasion.

Give a Rum-head in your life a vacation for his tastebuds. Back in the day, Rum was considered a remedy—a universal life hack making Man’s hardships a bit more bearable. In 2020, the Rum really impressed Flaviar members as they voted it into the Top 5 Spirits of the year, winning it one of the 2020 Flaviar Awards.

Personally, for the holidays I love gift packaging combinations and this season Puerto Rico’s Destilería Serrallés is leading the way with their new Don Q Reserva 7 with a two rock glasses package featuring their new logo and bottle design.

This molasses-based Rum is produced in Ponce, Puerto Rico, and created using a blend of heavy and light column still Rums that have been aged in used American White Oak barrels for a minimum of seven years.

Bottled at 40% ABV this product is a fine addition to their portfolio and a must-have for anyone that enjoys robust Spanish-style Rums.

Appleton Estate announced in the early part of the year that they were launching a new bottle design a new version of their eight-year-old offering.

Appleton 8 Reserve Rum is a blend of column and pot still Rums that has been aged a minimum of eight years in used American white oak Bourbon barrels. The Rum is blended to 43% ABV and no flavoring agents are added to the Spirit.

Versatile as a quality sipping Rum and outstanding in a variety of classic and tropical cocktails, this Rum is a great value that will be an exciting discovery for any Rum lover.

In 2020 we saw the first African-Caribbean Rum collaboration with the release of Equiano. The Rum was created when Richard Seale of Foursquare Rum and Global Rum Ambassador Ian Burrell collaborated to produce this unique Rum experience.
For the blend, Ian Burrell sourced ten-year-old Rum from the Gray’s Rum Distillery located in Mauritius that had been aged in French Limousin oak and used Cognac casks. The Rums were transported to Barbados where they were blended with Foursquare Rums that had been aged in used Bourbon barrels for a minimum of eight years and brought to 43% ABV before bottling.

This blend delivers a unique flavor experience that became an instant hit during the year and would be a pleasant surprise for any Rum enthusiast to unwrap.

The Chairman’s Rum line is produced by St. Lucia Distillers and Legacy is named for and in honor of Rum pioneer, Laurie Barnard. During his time Mr. Barnard strove to elevate St. Lucian Rums to a special place in the international Rum market.
Using pot still Rums, special casks for aging, and then blending the Spirits to create a new flavor experience his vision guided the company into the 21st century. The Legacy blend is comprised of a blend of Rums aged between five and eight years and blended to 43% ABV.

For those who appreciate the Chairman’s Reserve line, this is abounded to be a delightful discovery.

In recent years Barbados Mount Gay has been releasing limited edition Rums. This small-batch release is a creation of Master Blender Trudiann Branker.
Using a blend of column still Rums aged for five years in Tawny Port Casks and double distilled pot still Rums aged for 14 years in used American white oak Bourbon barrels and then finished in Tawny Port Casks for one year. These Rums are blended and bottled at 55% ABV.

Limited to 6570 bottles worldwide these bottles are a favorite for connoisseurs and collectors and if spotted in a shop or online an easy gift to purchase.

Produced in Jamaica at the Worthy Park Estate their 2006 Single Estate vintage is created using molasses from their sugar factory that is fermented then distilled using a copper pot still.

What makes this vintage a great gift for fans of Jamaican Rums is it is the first vintage release from Worthy Park and is one of the few 100% pot still Jamaican Rums that has been aged for 12 years.

The company has gained a major foothold in shops around the globe, making it more available than ever before. Worthy Park Single Estate 2006 is an impressive selection for enthusiasts with a strong appreciation of Jamaican Rums.

I hope this guide gave you some good ideas and that your gift recipients enjoy what you select for them. Cheers!
Read more about:
Published Dec 16th 2020 Updated Nov 18th 2021
By Paul Senft