A Guide to Every Rum Type You'll Ever Encounter

Published in:
By Peter Holland
Anyone spending more than five minutes in the world of Rum will start to see certain terms repeating time and time again. Some are ingrained into the category, some are new and trendy, and some make no sense at all – at least, not when you drill down a bit.

So, with that in mind let’s take some of the more commonplace Rum classifiers and try and make a little more sense of them (spoiler alert: Malibu is technically not considered a Rum).

White Rum is seemingly the most simple and yet in reality the most complicated of terms. Aside from the obvious – i.e. it’s a clear spirit - ‘white’ is pretty much one of the most useless guides to how a Rum will taste.
All freshly distilled alcohol is clear. So white Rum could be a pure pot still Rum with a full, intense flavour profile or it could be a light, modern Rum produced on an efficient multi-column still with a flavour profile that is more akin to Vodka. It could be a blend of both. Further to this, it could be unaged, or matured and then colour stripped using clever filtration. It might even be a blend of all the above.

The only thing that you can guarantee is its clarity. Oh… hang on... Actually, some of the white Rums do have a little bit of colour remaining. A hint of gold if you will. Plantation 3 Stars White Rum is a great example of that.

Sometimes it’s desirable to have a clear spirit to use in Rum cocktails, and I certainly prefer my Daiquiris or Mojitos to have a nice translucency. But if I want my daiquiri to taste a certain way, then just asking for white Rum really won’t cut the mustard.

A huge number of brands designate their expressions as white, silver or platinum and I guess they pre-suppose that you the consumer will know more about the brand and the sort of flavour profile to expect. At first glance, the only difference between Bacardi Carta Blanca and Wray & Nephew Overproof is a difference in bottle strength – of course if you’ve sipped them you’ll know this really isn’t the case. If you knew how they were made, then you’d be a lot further forward.

Suffice to say, a lot of white Rums are really quite flavourless, which is a shame. Take your time and find something with character – if the new make Rum is lovely, the aged Rum should be even better!

Categorisation by colour is a bit of a bug-bear of mine as you might be starting to realise.

This is another loose term that infers without being specific. The process of ageing or more accurately maturing a spirit in a wood barrel will result in the spirit acquiring colour as it goes. There is certainly a correlation between time and colour. The longer a Rum is matured, the more likely it is to become darker in colour (clear to lemon to gold to amber to mahogany to brown). But darker does not always equal better.
The problem is that the pre-existing condition of the barrel is very important – is it brand new or has it been used a lot of times before? Has it been deeply charred or lightly toasted? Not forgetting the type of wood used in its construction (French vs American Oak, or even Amburana for example). All of these factors will change the way that the Rum picks up colour, but also how the Rum will mature flavour-wise. 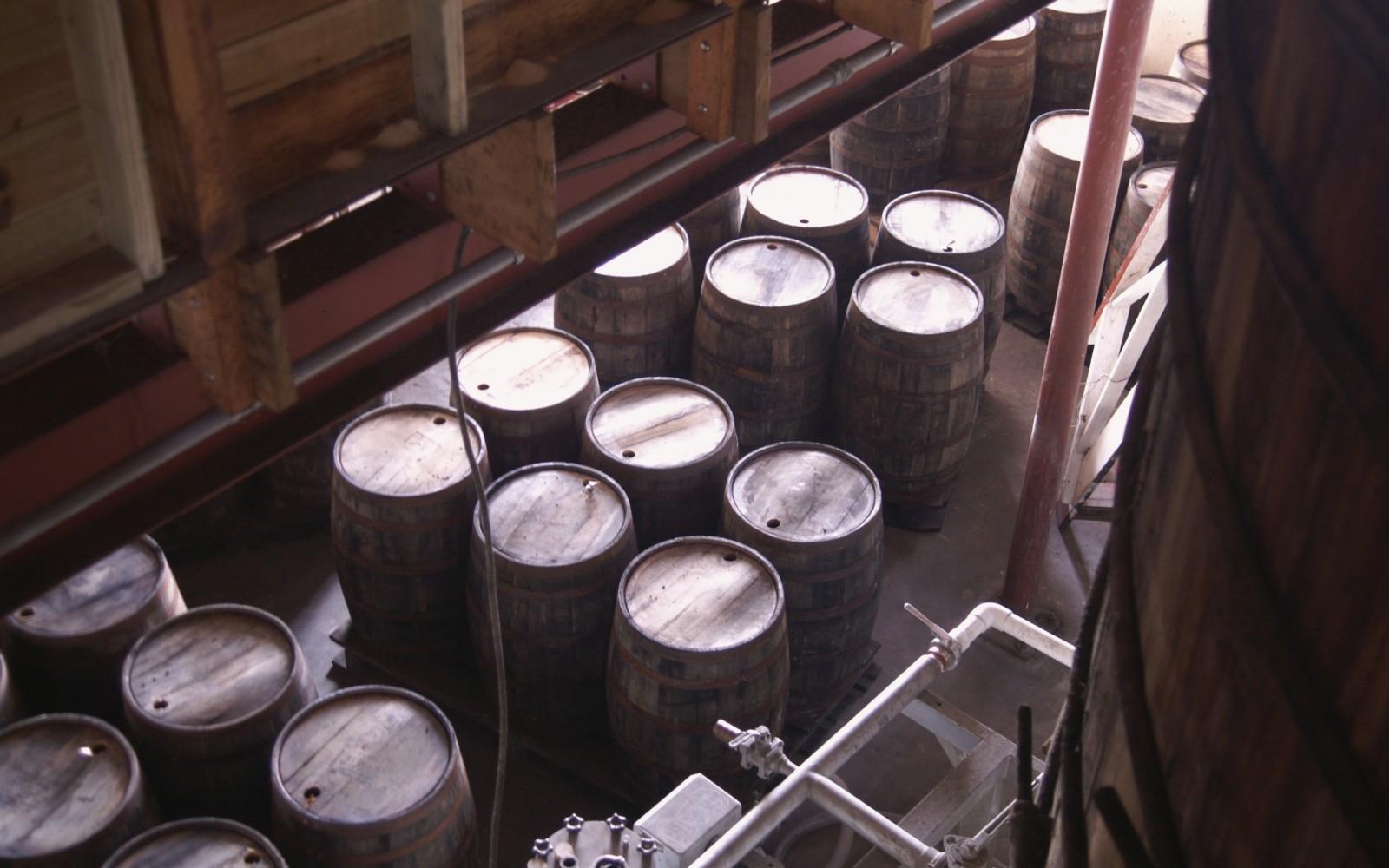 It’s about this time that we need to introduce caramel into the equation. Spirit caramel is often used in batch to batch colour adjustment. A little caramel goes a long way and some producers use more than they should to give a false image.

It’s an absolute truism that older does not always equal darker and that darker does not equal better. When the world realises this and that batch to batch, there could well be some colour variation (and this doesn’t matter because colour is not flavour), the world will be a happier place.

Any Rum selling themselves as a dark or black Rum is very likely to be looking to sell you a young Rum with a lot more spirit caramel in. You’ll be looking to experience ‘grip’, or the dryness on your tongue that is due to the presence of genuine tannins in the matured spirit. Young, coloured Rums just don’t have it.

Also – any company marketing their products as ‘Black Rum’ really should be consigned to the furthest reaches of Hell. Dante actually wrote of the 10th Level of Hell in his Divine Comedy* – other levels might have been for more commonplace sins such as Lust or Gluttony, but the 10th level was for all marketing people who refer to their Rum as ‘Black’. Apparently, he decided to not publish the 10th level as the punishment doled out was just too terrible to commit to paper.

In a nutshell, Navy Rum is a high proof blend of different marques of Rum. We're talking destinations such as Guyana, Jamaica, Trinidad and Barbados.

The British Royal Navy had a thirst for Rum that lasted from the late 1600’s through to the 31st July, 1970 (Black Tot Day). It was such a key element, that the ‘right and privilege’ of the sailors was serious business.

I’m not sure where the notion of adding caramel colouring came in, but these days a lot of brands claiming to be ‘navy style’ tend to heavily colour their Rums. Rums with excessive amounts of colouring tend to have a bitter edge to them, because caramel is actually burnt sugar and not at all sweet. When it comes to navy Rums, the colour is irrelevant - a proper navy Rum should be high proof (perhaps even Overproof) and a blend of different marques of Rum.

Spiced Rum is Rum with added flavourings. There is a refreshing honesty about any brand that designated their Rums as spiced, in that they are honest about the fact that the bottle contains more than just Rum. It’s likely to contain a lot of sugar and other flavourings. Many local Rums you like to indulge in during your Caribbean vacation, fall into this category.
The less imaginative brands use little more than sugar and vanilla. The better brands use ‘actual-honest-to-goodness’ spices and macerate them in real Rum. This process is more time consuming and you’d expect the human effort and cost of production to result in a more expensive product. Synthetic, or natural flavourings are easier and quicker to work with.

The disappointing thing about spiced Rums is the tendency to bottle below the minimum level of alcoholic strength that would designate them as a ‘Rum’. Here in Europe this is 37.5% ABV and many Rums are 35% or lower, sometimes much lower. Malibu is only 21% and many retailers list it as ‘Rum’ when it is really on a ‘spirit drink made with Rum’.

Spiced Rums get mixed into a Rum and Coke a lot, but if you're looking for fresh ideas on how to drink spiced Rum, you're in the right place.

This is the first of a series of classifications by previous colonial occupier. Once again, it’s a terrible way to second guess what the flavour profile in your glass is likely to be based on that detail.

That said, ‘English’ style Rums tend (and I’m generalising quite a bit) to be either pure pot still or pot/spirit column blends, resulting in a medium to heavier flavour profile. You can genuinely expect Rums from Barbados (Mount Gay), Jamaica (Appleton), St Lucia (Chairman’s Reserve) and Guyana (El Dorado) to be ‘English’ in style.

Demerara is a term for Rums that originate from Guyana. The link being the Demerara river that the Demerara Distillers Limited (DDL) facility is located upon (producers of the El Dorado range of Rums), rather than the high-quality sugar of the same name.

A post shared by El Dorado Demerara Rum (@eldoradorums) on

The Rums produced there are not made from Demerara sugar. Demerara is a nice tag, but it’s doesn’t really mean anything in itself. The good part about the notion of Rums produced by DDL is that they might contain Rums produced on any one of a number of heritage stills, such as the Port Mourant, the double wooden pot still, or the Enmore, a wooden Coffey still that help to give the Rums such a distinctive profile.

Following on from the terrible levels of generalisation I offered for ‘English’ style, the ‘Spanish’ or ‘Latin’ style Rums tend to be lighter in profile due to the tendency to use modern, multicolumn distillation. You need to drill down harder to truly understand the way they can taste.

Cuban Rums (and I’ll include Cuban-style Bacardi within this) will use ‘heavier’ (less rectified) Rum, from a lower plate on the still as a part of the Rum blend. Without spending a long time talking about distillation, it’s a way of approximating the fuller flavour of a pot still. It’s only an approximation, but it does add a certain something which sets it aside from the very light rectified spirits of some producers.

You could expect Rums from Nicaragua (Flor de Caña), Panama (Ron Abuelo), Puerto Rico (Don Q) and Trinidad (Angostura) to be classified as ‘Spanish’ in style.

The Solera system for ageing Rum was first conceived in Spain. The goal was (and still is) the creation of a consistent, reliable and therefore quality Rum. The barrels are organized in rows from the ground up, with the lowest layer of barrels containing the oldest aged liquid. The theory is simple: the young Rum is influenced in terms of maturity by the older Rum in the barrel into which it has been placed.

Solera is perhaps a somewhat confusing system of maturation and therefore much misunderstood. Perhaps it’s the notion of an implied age statement by the prominent use of a number on a bottle's label that’s the point of contention. But once you see the word Solera, don’t go looking for an age statement. You know it’s going to be a blend of young and old Rums. The rest is down to your palate, and your wallet.

Agricultural Rhum is something of a catch-all for Rum/Rhum made from cane juice. Though often associated with it, Rhum Agricole isn’t limited to the French Caribbean. What is more, not all islands in the French Caribbean produce exclusively Rums (or should that be Rhums?) from fermented sugarcane juice. But all the other Rum categories discussed here today are made almost exclusively by distilling fermented molasses.

Rum produced from cane juice can exhibit a very different flavour profile – fruity, grassy, and vibrant those produced from molasses.

The vast majority of Rhums produced in Martinique are governed by an Appellation d'Origine Contrôlée (AOC) which means that in order to conform, the Rhum has to have been produced in a certain way. This might lead you to think that they will all taste the same, and whilst there are shared characteristics, the AOC is open enough to allow each brand to develop its own style.