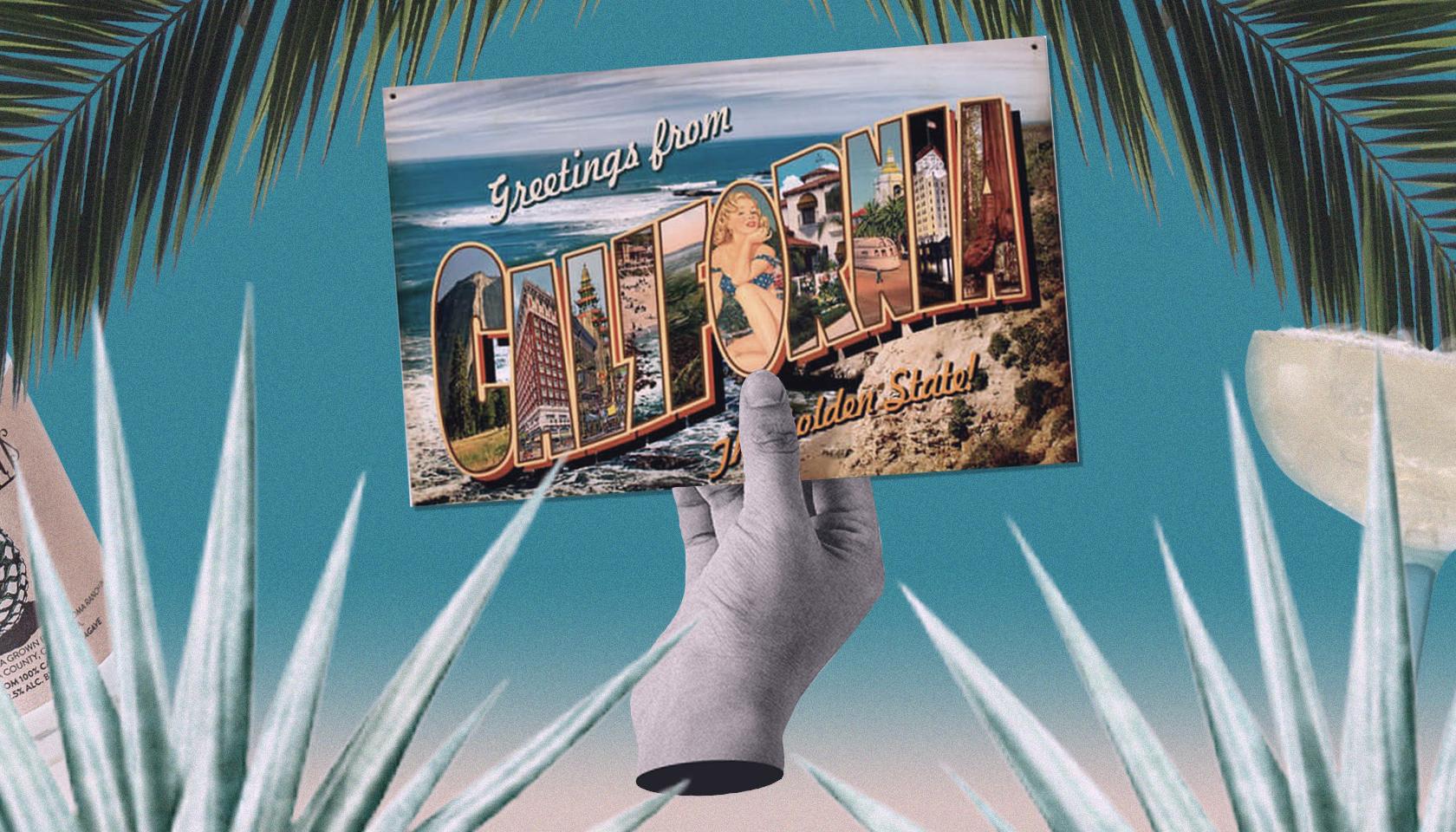 Legally “Tequila” and “Mezcal” can only be made in Mexico but it’s perfectly legal for anyone to try their hand at making a Spirit from the agave plant which gives those legendary spirits their distinctive identities. Some Californians are trying their hand at it..

California has a long history with the agave plant because it’s right next to Mexico. Actually, if you throw out the political boundaries, they share the same weather systems, rivers, deserts, and mountains: The Sonoran desert flows between Northern Mexico and Arizona while old Alta California, aka contemporary California, flows seamlessly into the Mexican state of Baja California.

Since plants don’t discriminate between nations it’s quite natural for them to simply grow where the climate and soil are most welcoming.

And the agave is nothing if not a survivor and adaptive plant: Some varieties have evolved to love the arid desert conditions of the high desert, others proliferate in the very humid zones along the coast. They just don’t like too much cold and really hate the snow.

The locals have been making booze for quite some time

We know that the indigenous peoples of Mexico cooked agaves for food for thousands of years and that didn’t stop at the political border either.

There’s a Mezcal band of Apache (the word Mezcal is frequently used interchangeably with agave within some indigenous languages) who were cooking agaves in northern Mexico and the US Southwest and there is evidence that many others were doing the same thing well before Europeans came to North America.

But distilling is another thing entirely. While many indigenous peoples were fermenting fruits for mildly alcoholic beverages for quite some time, including making Pulque from fresh agave sap, it’s pretty clear that distilling technology only arrived with the Spanish.

Once they brought stills to North America everything changed. Here in the United States distilling has been part of the country’s soul since the very beginning and it is intimately tied to every part of the country’s development from how colonists traded in slaves and sugar to make Rum, how they transformed apple surpluses to apple Brandies, and how they did the same thing with grain surpluses to make all the whiskeys that the country is justly famous for.

But this latest wave of craft distilling is something else entirely: While the COVID-19 crisis has been a disaster for the industry, previously it was exploding at an amazing clip and, fingers crossed, should remain a powerful force.

Clearly, distilling is a compelling and attractive venture to many people and with each successive wave, distillers are searching for new ingredients and ideas to run through their stills.

We’ve always loved Tequila but who woulda thought of making it in California?

California has long been the center of agave spirits in the US simply because of its proximity to Mexico.

US citizens travel there all the time, Mexicans do the same, the place has been a trendsetter for the US and globally so it’s no surprise that things like Tequila and the Margarita really used the state as a launching pad to global supremacy.

That shared climate and history meant that agave was already present so we have motivation, we have the weapon, it just took local distillers and farmers a bit of time and inspiration to really get going.

There were projects like the agave farm in Temecula, outside of San Diego, that didn’t quite achieve lift-off but one of -  if not the first - to really reach fruition was Lance Winters’ St. George Spirits in the Bay Area to come up with batch one of an agave Spirit which was made from agave shipped from Mexico for their project.

They quickly encountered the trickier aspects of making Spirits from agave, the plant is incredibly fibrous so it requires specialized machinery or hand mashing to prepare it for distilling. That was one of the first experiments and no doubt provided some inspiration for others. ‘If he can, then why can’t I?’ has launched a million projects.

Some distillers thought about the whole idea of agave spirits from a new perspective - Santa Cruz-based Sean Venus of Venus Spirits has been making Ladron since 2015 from agave syrup shipped from Mexico.

It’s an idea that others have tried, mostly in larger industrial operations with an eye to speeding the distilling process so that they could derive easier profits, but Venus managed to create something that had its own identity.

He picked up the raw material, worked to express it, and, without any tie to a distilling tradition for it, created something entirely new. The whole approach was very refreshing and seems to be slowly percolating up to other distillers in the US both because it is much easier to use agave syrup than the whole agave and because it opens other doors.

Some distillers are working with mixes of agave syrup and freshly milled agaves to see where they can go with this concept. Needless to say, purists frown on this but it could lead in interesting directions.

While all of this was going on others were focused on growing agave with the idea of making a Spirit out of it down the road. Since agaves take at least five, usually closer to eight, years to fully mature and are killed once they’re harvested, the lead time is quite significant and requires quite a bit of planning. Fortunately, there are obsessives everywhere like Doug Richardson in Santa Barbara and Craig Reynolds in the Sacramento Valley.

Doug Richardson is a long-time nursery man who, among other things, has really brought the banana tree to life in Santa Barbara’s unique micro-climates through Drylands Nursery. He’s long been interested in agaves as well and has grown them for their natural beauty and landscaping character which makes them incredibly attractive to California:

They look great, don’t consume much water, and act as fire breaks. But he’s also been an important seed - no pun intended - for the use of agave in local distilling by providing some of the inspiration and raw material for Ventura Spirits just down the road from him to make a local agave spirit.

They call it the La Paloma and have grown the idea to such a point that they’re selling out of batches as fast as they can make them. And they’re expanding sources to other local agave growers which is starting to foster a virtuous circle of people who are interested in agave as a commercial crop.

That is only good news for the agave spirits world - more distilling experiments means that there are more styles and opportunities for fantastic spirits - but also for California as a whole because the state lives in a cycle of droughts which mean that water is a precious agricultural resource and that forest fires are always a threat.

If you jump up the state north of the capitol to the Sacramento Valley where locals have long farmed walnuts but recently have branched out into olive trees and grapevines, at least one person, Craig Reynolds, has been planting agave with the ambition of making great Californian agave Spirits for some time.

Professionally Reynolds worked in the state capitol but his in-laws were farmers and he had a long-time charity connection to the Mexican state of Colima which is nestled next to Tequila’s heartland of Jalisco.

As a frequent traveler to the area, Reynolds loved Tequila and all the other local agave Spirits and eventually got it into his head that he should try to grow his own so he planted a crop of blue agave in Colima, watched it grow, and eventually made it into an agave spirit called “Dos Volcanes” or ‘Two Volcanos” named after the towering mountains in the area.

As he was working on that project and going back and forth between his two homes he began to think about the viability of agave in California.

Thinking turned to action and he planted a field on his in-law’s land. Once they ripened he harvested and roasted them in 2019 with Mezcal distiller Efrain Nolasco who makes Benesin Mezcal in Oaxaca. Reynolds connected with St. George Spirits’ Lance Winters who took the roasted agave and transformed them into an agave spirit that is just about to be released. Meanwhile, Reynolds continues to grow more agave and seems to be inspiring others to do the same.

But California isn’t an island and agaves grow throughout the Southwest so distillers in Arizona, Texas, and further afield are trying their hand at agave Spirits.

It’s one of the toughest materials to work with which, for a distiller, is just the challenge they’ve always been looking for.

What would get you to drink a California agave Spirit instead of Tequila? Tell us in the comments.