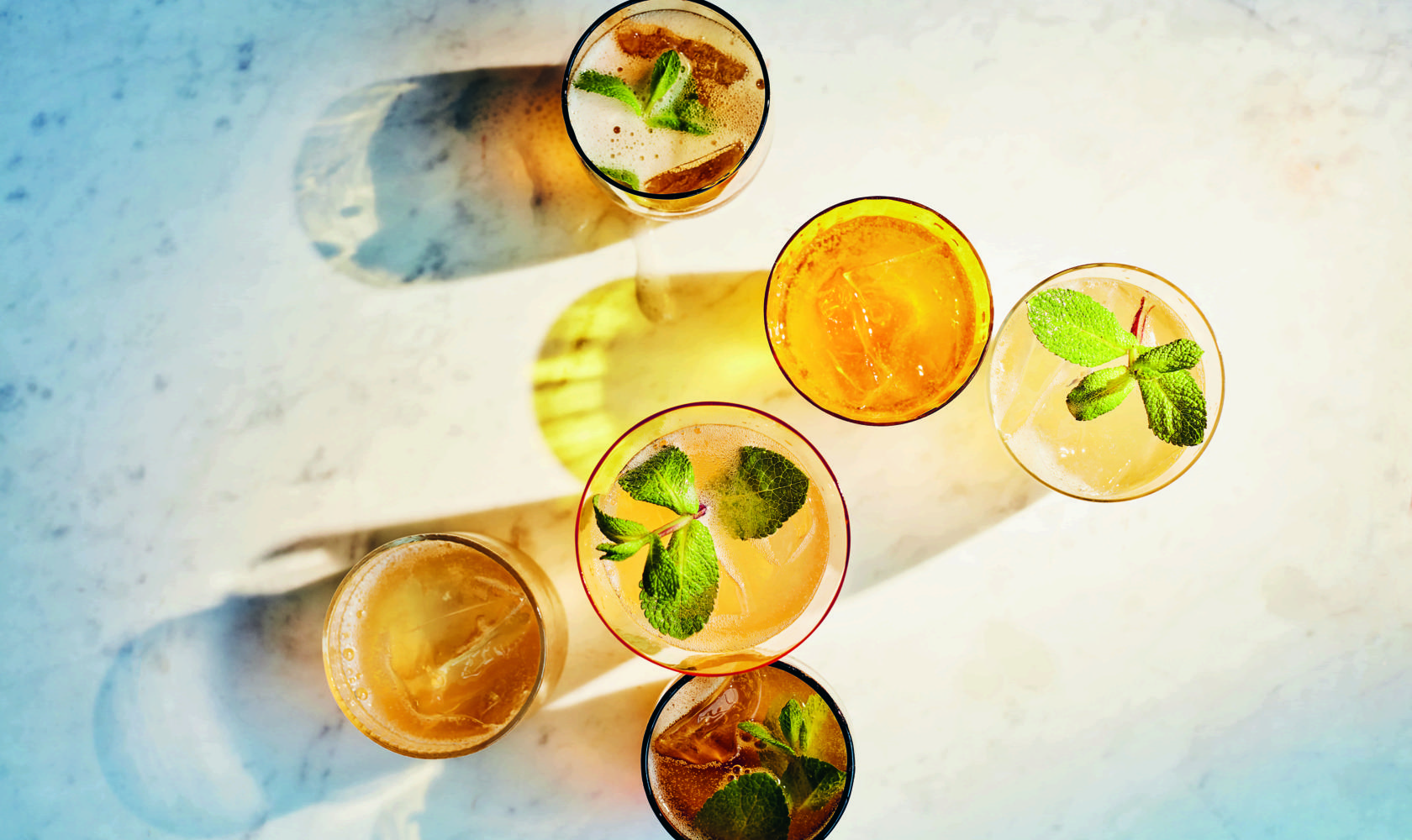 Award-winning British drinks writer Alice Lascelles just published her new book, The Cocktail Edit. It contains a wonderful collection of drink recipes that satisfy the palate and inspire creativity. She also includes a very handy section on her ideal 12-Bottle Bar set up. She has graciously shared this excerpt with us. Cheers!

If you only buy one gin, make it a classic London dry–as this is the style that works best in the greatest number of cocktails. Beefeater is excellent value, with crisp, clean juniper and citrus notes that shine in mixed drinks. Tanqueray, which contains no citrus, has a much more spicy, dry bite. A classy, broad-shouldered London dry for mixing old-school stiffeners. Plymouth Gin is made with sweet, rather than bitter, orange and more mellow, rootsy botanicals that make it softer and more elegant. It is especially good in more nuanced drinks such as Aviations and Martinis. Hepple is distilled with rain-drenched botanicals foraged on the Northumbrian moors. Complex but fresh, and juniper-forward, it’s a first-rate cocktail gin. Strength-wise, aim for something in the 40–47% abv (alcohol by volume) range–any stronger tends to be unmanageable; any weaker tends to be bland.

The vermouth I always have in the fridge for Martinis is the French brand Noilly Prat Dry. Made in the south of France from oak-aged white wines, herbs, spices and citrus, this light-gold vermouth has a slightly nuttier, more saline character than many of its peers. And it’s that appetising quality that’s made it a favorite of Martini drinkers around the world for more than 100 years. Another good vermouth in this more savory vein is La Copa Blanco Extra Seco by sherry producer González Byass–based on fino sherry, it has a slightly salty tang. Fresher and perhaps more ‘pretty’ is the Dry from French house Dolin–a classic Chambéry vermouth made from white Savoie wines and herbs picked in the Alps.

It might not be the trendiest choice but Martini & Rossi’s red vermouth is a really solid buy–lighter and drier than many red vermouths, it’s extremely versatile. Especially suited to spritzy and white-spirit drinks such as Americanos and Negronis. For a few extra quid, you could get the more upmarket Martini Riserva Speciale Rubino–a traditional Turin-style vermouth with bigger, more complex flavors that work well in whiskey drinks. I’m also a big fan of the barbera-based rosso by Chazalettes. It’s twice the price of Martini but arguably twice as interesting, with lively red and black fruit, woody spice and sage-y wormwood notes that are great in cocktails or just neat, on ice.

A note on terminology

Vermouth terminology is confusing, to say the least. Red, or rosso, vermouth is often referred to in cocktail guides as ‘sweet’ or ‘Italian’ vermouth–both terms that are pretty unhelpful. ‘Sweet’ makes no sense because if you go on sugar content, white vermouth is the sweetest style of all. ‘Italian’ is nonsense too, these days, because red vermouth is made all over the world. I call this vermouth ‘red’. Dry vermouth–sometimes called ‘French’ vermouth–‘dry’. And sweet white, or ‘bianco’ vermouth, I refer to as ‘white’.

You must have an American whiskey, of course–but should it be bourbon or rye? All the real classics–the Old-Fashioned, the Manhattan and the Sazerac – would have originally been made with rye, as this was the style of whiskey that prevailed in the States up until Prohibition. Peppery, spicy and flavorsome, rye whiskey is wonderful stuff. Pikesville and Sazerac Straight Rye both make a good Manhattan. Wild Turkey Rye is also splendidly cranky. Bourbon, which is based on corn, tends to be sweeter, easier sipping. Its notes of caramel, vanilla, tobacco and baking spices play more nicely with other things. Buffalo Trace and Woodford Reserve are both excellent all-rounders. Further up the scale you’ve also got Michter’s Bourbon and Eagle Rare–both would make a really five-star Old-Fashioned. The strength of American whiskies can vary considerably–so keep an eye on the abv. The recipes in this book work best with whiskies in the 40–47% abv range.

Oft-imitated, but never bettered, this bittersweet Italian liqueur is the gateway to a multitude of delicious aperitivi. But it’s also great in a simple highball with tonic, soda or grapefruit juice. My kitchen is never without it.

Younger VS and VSOP cognacs tend to be much fruitier and more supple–which is what you want when you’re making a brandy drink. H by Hine and Rémy Martin VSOP are both excellent in cocktails. I also love pretty much anything by Frapin. My ideal drinks cabinet would contain two rums: a light, dry rum for making Daiquiris and Mojitos, and a darker, more mature rum for punches and slow-stirred cocktails. If you can only run to one, choose on the basis of what you like to drink. Light, dry rum originated in Cuba, and was made famous by Bacardi and Havana Club. My favorite example is the pale gold Havana Club 3 Year Old–grassy, citrusy and ever-so-slightly medicinal, it makes a superlative Daiquiri. Slightly rounder and sweeter is Plantation 3 Stars, a blend of white rums from across the Caribbean that’s so smooth you could sip it neat. When it comes to amber mixing rums, the Jamaican distillery Appleton is queen– its fruity, funky pot-still spirits give real sass to punches and cocktails. Barbados’s Foursquare and Mount Gay distilleries, and the Guyanese distillery El Dorado, also make excellent rums that run the gamut from cheap and cheerful to serious digestifs.

A good tequila should have polish–but it shouldn’t be too clean. You want to taste the peculiar mix of mineral, citrus and vegetal notes that’s so particular to the agave plant. Steer clear of inferior mixto varieties and go for an unaged blanco or lightly aged reposado tequila that’s made from 100% Blue Weber agave (it will usually say on the label). Ocho and Tapatio are two tequilas that combine freshness with great character– both are made at the same distillery in the red-dust highlands of Jalisco. Olmeca Altos, which was co-created by bartender and agave aficionado Henry Besant, is also good. It’s harder to recommend a mezcal as the range of styles is so great. And quite frankly, if you’re a mezcal drinker, you probably already know what you like anyway.

Cointreau is the most famous example of this crystal-clear orange liqueur. But Merlet also makes a triple sec called Trois Citrus that’s wonderfully zesty. Triple sec overlaps with orange curaçao, an orange liqueur that is brandy-based–at a pinch it can often be used as a (rather lighter) substitute.

Angostura is the bitters brand you’ll see behind most bars. But if I was only allowed one variety of bitters, I’d go for orange bitters as they’re much more versatile: they work in all the whiskey drinks that call for classic Angostura, but also bring an extra lift to many white-spirit drinks: Margaritas, Daiquiris, Punches, Gimlets and Martinis. They’re good in tonic and cola and even in hot water. Angostura Orange Bitters are big on marmaladey spice; Bitter Truth Orange bitters have a zesty freshness more like orange peel; Regans’ Orange Bitters taste almost like Campari. Of course, as you’ve probably guessed, I don’t own just one bottle of bitters – I own lots: cherry-red Peychaud’s Bitters from New Orleans and Bittermens bitters with grapefruit and hops; paper-wrapped walnut bitters from Fee Brothers; cocoa bitters and celery bitters and shiso bitters from Japan. Each one of these potent tinctures brings something different to a drink. A fun and easy way to instantly expand your cocktail repertoire.

Distilled in Torreglia from the stones, bark and leaves of the sour marasca cherry, this transparent liqueur has a sweet, almondy scent as intoxicating as that of a magic marker. It’s key to vintage classics including the Aviation and the Last Word but it can also be used in place of sugar syrup to make virtually any cocktail a bit more interesting. There are other brands of maraschino but Luxardo’s is by far the best–one instance where I will accept no substitutes.

Using your best vintage champagne in a cocktail won’t make it taste better–in fact, it will almost certainly make it worse. What you want when you’re mixing is a wine that’s youthful and fresh and easy-going–that doesn’t need to be the star of the show. Just about any sparkling wine will work in a cocktail as long as it’s not too oaky: prosecco, crémant, English sparkling, champagne. It really boils down to what you’ve got open. When it comes to still wine you can even get away with using something that’s a teensy bit over the hill. You know that open bottle of wine you’ve got hanging around that’s not quite nice enough to drink any more, but not yet bad enough to throw away? That wine is probably perfect.

Alice Lascelles is a journalist, drinks writer and presenter. She writes a popular column for the Financial Times covering wine, spirits and cocktail culture and can often be found talking about drinks on the TV and on BBC Radio 4. She’s been named Fortnum & Mason Drinks Writer of the Year, Spirits Communicator of the Year at the International Wine & Spirit Competition and is also a Keeper of the Quaich. She lives in London with her husband, two sons and cocker spaniel Daisy.