Holiday Drinks From Around The World 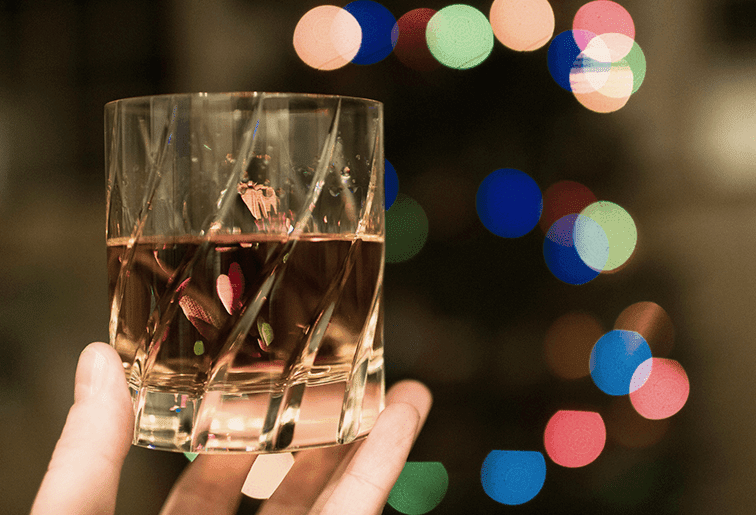 Holiday season is upon us in full swing. What are you gonna be drinking for Thanksgiving, Hannukah, Christmas, New Year’s Eve and everything in between? Although we have absolutely nothing against it, it surely isn’t gonna be served neat, right?

Be it USA, Scotland, Scandinavia or Christmas, Hogmanay or New Year’s Eve, there’s an alcoholic drink associated with it. We’ve gathered a list of 8 countries and their locals’ favourite holiday drinking customs, traditions and drinks.

King Gustav I Vasa of Sweden was apparently fond of a drink made from German wine, sugar, honey, cinnamon, ginger, cardamom and cloves. In 1609 they named it “glödgad vin” meaning “glowing-hot wine” and later it was shortened to just “glögg.” Its popularity quickly spread through the European nations and in the 1890s, it became a Christmas tradition of many countries.

Glögg probably has as many recipe variations as Gin and tonic; Swedish recipes call for Aquavit (a distilled spirit flavoured with caraway seeds), Finnish for Vodka, Irish for Irish Whiskey and the US for Bourbon or Brandy. And while we can’t decide on our favourite one just now, we recommend all of them! Just not at the same time, silly.

If someone catches you drinking glögg at an unacceptable hour just tell them that it was used as a health potion to cure muscle strains at some point in history. True story. 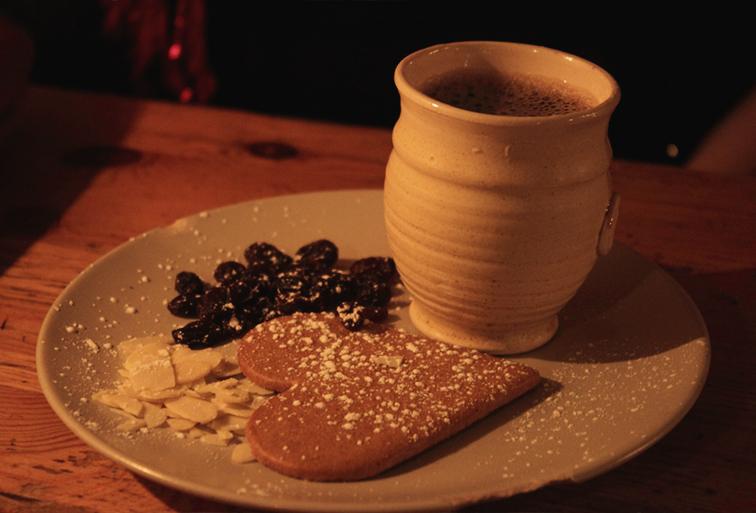 Nobody celebrates New Year’s Eve like Scots. Nobody!
Hogmanay is the Scottish celebration of the New Year that can last for days. Believed to be inherited from the Vikings and their celebration of the shortest day but many also believe that because Christmas was banned and therefore not celebrated in Scotland from the end of the 17th century to the 1950s, New Year’s was a good excuse for some Scotch drinking and good food eating.

Hogmanay involves parties and festivals across Scotland with the largest and most famous public party in Edinburgh. While Scotch is the obvious drink of choice, classic Scottish dishes accompany it accordingly; haggis, venison pie, cock-a-leekie soup, tatties, neeps and desserts like Scottish cranachan and tipsy laird trifle all make an appearance.

Don’t know about you but we were sold by the time we heard it involves Scotch. Slainte!

Slow Gin? No! S-L-O-E Gin.
Sloes are little berries, that grow wild in hedgerows all over England and the reason you might have never heard of them up until now is that they’re not widely cultivated because they have an off-taste. Then Brits got a little creative and soaked some in Gin (duh...) and sugar, resulting in a unique liqueur that’s tart, yet possesses a delicious richness and great depth of flavour.

Sloe Gin is traditionally drunk in cold winters, especially on the Boxing Day hunt, but when the Americans got a hold of it, they summarised it with citrus and soda water. There were some mentions of drinks made of sugar, sloes and alcohol, as early as 1717 and 1838, but it wasn’t until the beginning of the 20th century that sloe Gin became a drink that could speak its name.

The British have been making Sloe Gin for hundreds of years and there’s no reason you couldn’t try making some at home — that is if you get your hands on some sloes first.

Loved and hated in America, Britain, and many other places. But why?

This drink is a perfect example of a love-hate relationship. Some people love Eggnog, some people h-a-t-e it. But you wouldn’t be reading this at Flaviar if we were talking about the non-spiked version, right? Therefore, there is still some hope to get yourself converted into an Eggnog lover.

The name of the drink provides a key glimpse into the drink’s history, as “nog” meant “a strong variety of beer” to English people around Norfolk. Moreover, the word “noggin” refers to one’s head, but also to “a small drinking vessel” in Ireland. 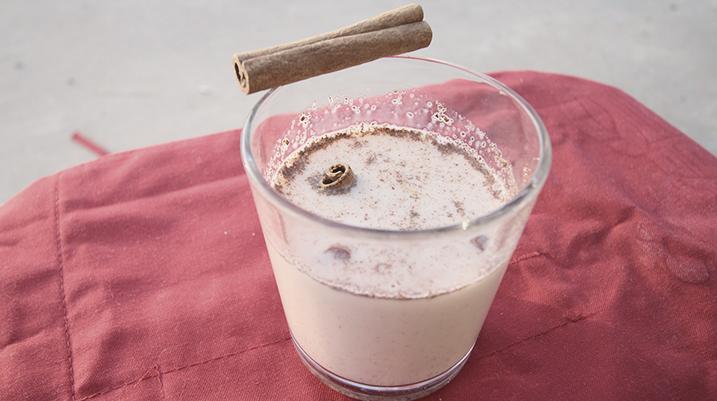 The first Americans were also Eggnog drinkers and that really shouldn’t have come as a surprise, as the colonies got plenty of Rum from the English-dominated Caribbean, and it was also an agricultural country with plenty of dairy products. Eggs + milk + booze = Eggnog. When the harvest was done and there wasn’t much to do, there was plenty of time for celebration, and that is why Eggnog is still so popular around Christmas. Besides, who would’ve drink this creamy deliciousness on a bright summer day?

Pro tip: Uncle Flaviar puts his kids to bed early and then spikes his Eggnog with some well-aged Bourbon or spiced Rum.

Did you know that Eggnog is a drink where 50 percent of the letters are G’s? Relevant? Not even slightly…

Silent night, holy night, Rum is here, hide the beer!
There aren't many things Puerto Ricans love more than saturated fats. Why are you telling me this, Uncle Flaviar? Oh, right, they also loooove Rum, and as Christmas time approaches they love to indulge in some Coquito.

The recipes vary, but in general, it’s a mixture of spiced Rum, condensed milk, coconut milk or cream of coconut, vanilla, and some spices such as cloves, cinnamon, and nutmeg. Some even add ginger or ground nuts, but one thing all versions of Coquito have in common is that it’s served chilled in a small glass.

Adding some eggs to the mixture results in a Ponche, the Venezuelan or Dominican version of eggnog.

When the Spasskaya Tower Clock on the Kremlin wall hits midnight, Russian start making wishes and drinking… champagne! Ha! Wasn’t expecting that, right? But don’t worry, champagne is the traditional drink of the first half hour of the New Year, then beer or Vodka take place.

If you ever find yourself celebrating a holiday in Russia or with Russians just remember that when a bottle of Vodka is opened in Russia it must be drank — no matter the consequences.

If saying this doesn’t twist your tongue, drinking it will.
This drinking tradition is a fairly modern one compared to the others and it involves hot mulled wine, high-alcohol Rum and open flames! Feuerzangenbowle (the name translates literally to fire-tongs punch) has become a popular Christmas season tradition in Germany, but the drink itself made an appearance in the 1943 comedy called “Die Feuerzangenbowle.” The movie has achieved somewhat of a cult status and has created a new unique tradition amongst youngsters who invite friends over for a mug of Feuerzangenbowle and a screening of the film.

In order to make it, prepare a fire extinguisher, then set a Rum-soaked sugarloaf on fire and let it drip into a mug of mulled wine. Prost! 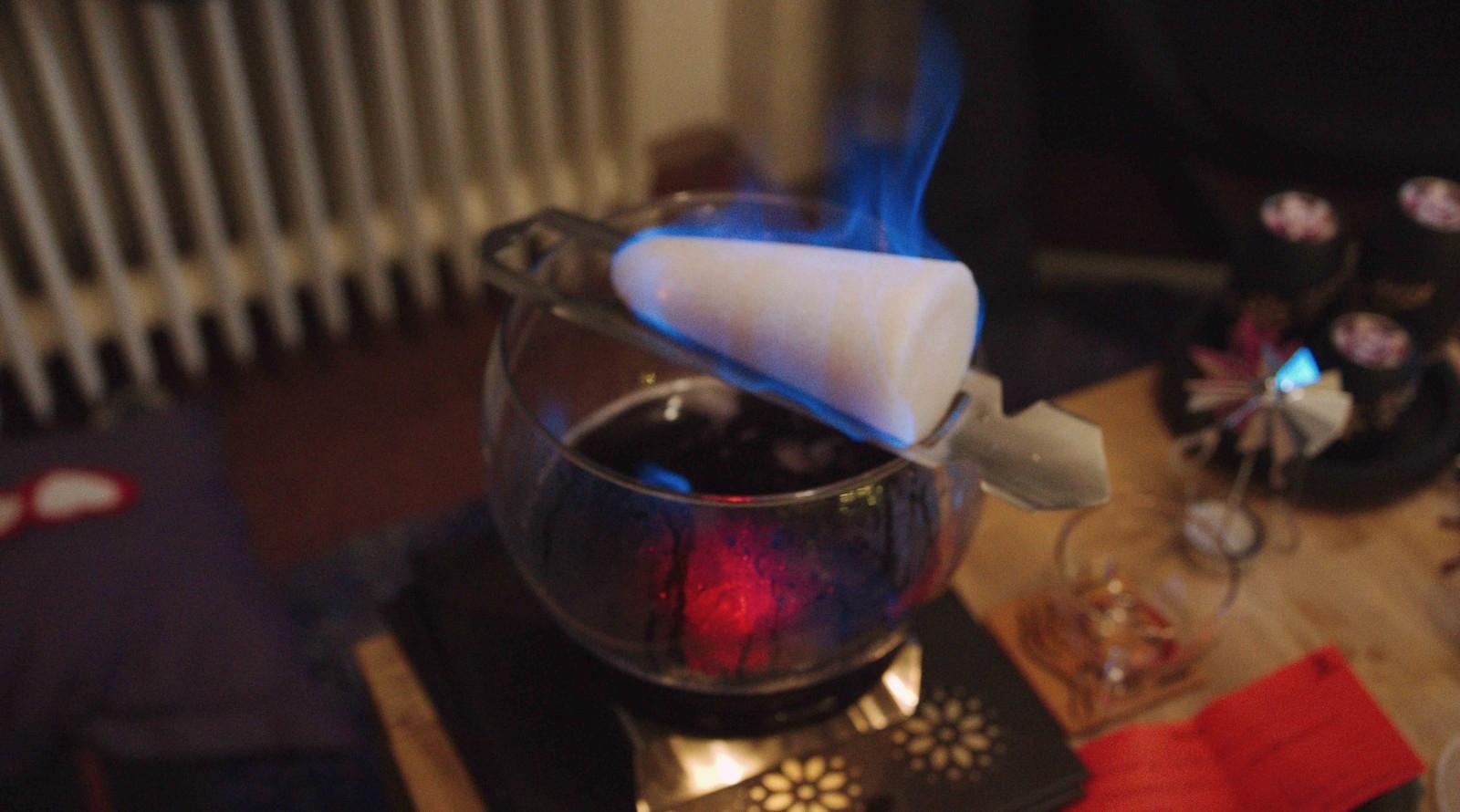 The only punch we like getting thrown in our faces.
Everybody is familiar with Punch made of juice, water, sweeteners and occasionally spiked with Bourbon or Rum. But have you ever heard of Sorrel Punch, a traditional Jamaican Christmas drink? Yeah… we thought so.

Sorrel Punch is made from the petals of a species of hibiscus (locally known as sorrel, but have nothing to do with American or French sorrel), sugar, smashed ginger, water, lime juice and dark Rum. Basically, it’s a fun twist on the traditional Punch.

Just make sure you use some good dark Rum, pump up the volume on your favourite reggae mix and you’re ready to start that Christmas party Jamaica style!