Ever wondered where the ‘nog’ in ‘eggnog’ comes from? Or why for centuries, we’ve been drinking this creamy, eggy, and rich concoction every Christmas?

Learn about the brief history of eggnog but more importantly, discover Martha Stewart’s special secret eggnog recipe to celebrate the holidays like the queen of home entertainings. What is eggnog made of?

Okay, but what about the booze? What alcohol is in eggnog?

Distilled Spirits are a key ingredient; the most traditional is Brandy, but you can also use a combination of dark Rum and Cognac. Some even add Bourbon to the mixture.

Treat your family and friends to Martha Stewart’s rich and indulgent eggnog recipe. If you’re more of a visual person and love to see Martha cooking, here’s also our video with her.

Add right before the party:

First, beat the yolks in a very large bowl. Do so until you get a thick and pale yellow mixture, then slowly beat it with sugar. Whisk in milk and cream. That’s your base that you’ll have to cover and refrigerate for up to a day.

Then, it’s time to add Spirits! Pour in Bourbon, Rum, and Cognac. Stir that gently as well.

Before you serve your delicious eggnog, beat the whites to form stiff peaks. Stir that in your eggnog. Then, whip the remaining cup of cream and add that as well. To garnish, sprinkle with freshly grated nutmeg.

Note: Since the egg yolks and whites in this recipe are not cooked, this recipe should not be served to pregnant women, the elderly, or anyone with compromised health.
Gift them a year of good things! Let your loved ones explore a wide range of Spirits of their choice with a one-year gift Membership in the world’s No. 1 Spirit Club. Why is it called eggnog, anyway?

There are many possible explanations for why eggnog is called eggnog. One of the theories is that “nog” is derived from “nogging,” a small wooden cup used in the 16th century.

Others, like Icelandic food historian Nanna Rognvaldardottir, say it comes from “nog,” an Old English word for strong beer.

Last but indeed not least, American colonists used to say the word “grogs” to refer to thick drinks, making eggnog “egg-and-grog.” With time, the words merged into “eggnog.”

Where does eggnog come from?

Most culinary historians agree that eggnog first came from medieval Britain. In the 13th century, monks would drink “posset,” a warm punch with milk, eggs, and figs.

Milk, eggs, and Sherry were foods of the wealthy, who would often toast to prosperity. British aristocrats would enjoy warm milk and egg drinks seasoned with expensive spices and crafted with expensive Liquor, such as Brandy and Sherry. When did eggnog come to America?

Eggnog hopped the pond in the 1700s. Instead of Brandy, it was often made with Rum as it was more readily available due to the proximity to the Caribbean.

In colonial America, Rum was cheaper than the Brandy and other Spirits shipped from England. But Rum wasn’t the only substitute for Brandy and Sherry; in the South, people would even make eggnog with Whiskey.

When we say people, we really mean people. Everyone loved eggnog. Even George Washington had a recipe that he served to his esteemed guests at Mount Vernon.

Why do we enjoy eggnog for Christmas?

Apparently, there’s no particular reason why we traditionally enjoy eggnog during the holidays. The tradition began in the 1700s when the concoction came stateside.

Eggnog is a rich, warm, and heavy drink that can keep you warm in cold weather. During the American Revolution, supplies of Rum were scarce, which meant eggnog became a drink for special occasions only. Due to its incorporation of spices like cinnamon, nutmeg, and vanilla bean, it’s also no surprise we usually savor eggnog during winter, especially the Christmas season.

If you’re interested in other boozy holiday customs, check out our holiday season drinking customs article.

Is eggnog served hot or chilled?

Both. Eggnog can be served chilled or hot, particularly on colder days.

What was the Eggnog Riot?

The eggnog riot is exactly what it sounds like — a riot caused by eggnog. The incident took place at West Point on the evening of December 24, 1826.

Even though the US Military Academy banned alcohol, some cadets managed to smuggle about four gallons of Whiskey onto the premises from nearby taverns to make eggnog. One of the cadets was Jefferson Davis, the future president of the Confederacy. Safe to say, that Christmas party must have been memorable. We think Martha Stewart’s eggnog recipe is also worth rioting over. How about your eggnog? Which recipe are you following this year? Let us know in the comments!

Oh, and if you’re looking for an ultimate holiday present, give the gift that keeps on giving: Flaviar Membership! 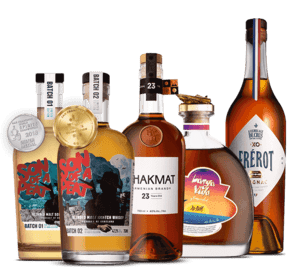