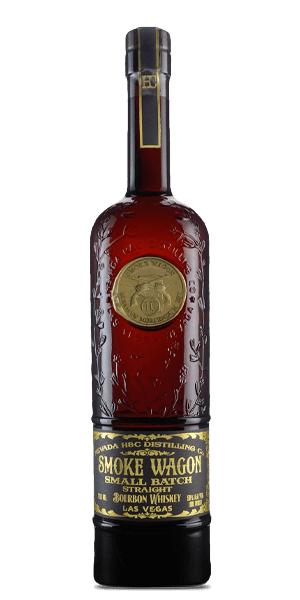 One night in 2004 after a long day of work, Jonathan Hensleigh stumbled into an Eagle Rock, California, bar owned by Aaron Chepenik. The two men struck up a friendship over a love of Spirits and decided to open a bar together — The Griffin, located on the famous Freemont Street in old-town Las Vegas. They soon saw an opportunity to craft their own signature Spirits made the right way. They launched Nevada H&C Distilling Company, producing Silver Dollar Vodka and a range of Smoke Wagon Bourbons.

Smoke Wagon Small Batch Bourbon Whiskey is a blend of small batch, high rye Bourbons aged four and five years in new oak with a dark #4 char. The reason is that the four year-old barrels had more rye spice, but the five year-old barrels favored the caramel and toffee notes. Blending the two strikes a good balance. And it’s bottled at 50% ABV, so it will stand up to ice and cocktails without a problem. This edition was first released in 2016 and has taken home the Gold Medal in San Francisco three years running.

Smartass Corner:
Jonathan Hensleigh — one of the founders of Nevada H&C Distilling Company — is an accomplished Hollywood screenwriter and director. He has written and/or directed several famous films, including Jumanji, Con Air, The Saint, Armageddon, Gone in 60 Seconds, and many more.

The Flavor Spiral™ shows the most common flavors that you'll taste in Smoke Wagon Small Batch Bourbon Whiskey and gives you a chance to have a taste of it before actually tasting it.

Nose / Aroma / Smell
On the nose we found ripe apricot, plenty of oak, and a dash of red apple.

Flavor / Taste / Palate
The palate is sweet with caramel tones up front, followed by a balance of vanilla, oak, baking spices, and a dash of white pepper.

Finish
The finish is long and warm with a lingering kick.

Alex, Feb 15, 2021
The oak remains center in the profile, but has surprises for all palates. The apricot & apple give it just a bit of sweetness & fruitiness while the spice & pepper give it a kick for the fans of rye & stronger bourbons. All in all a must try & a new favorite!

Eric, Jan 18, 2021
Apple on the nose. The initial taste is apple cider which quickly gives way to oak. The finish lingers for a while with a nice spiciness that has a sweetness to it. Overall this is a very enjoyable bourbon and it should be on your shelf.

Taylor, Dec 31, 2020
Great Bourbon! That nice rye spice on the front with a vanilla finish that really lingers. My new daily drinker!

William, Dec 2, 2020
Spicy, but it isn't harsh. Sweetness towards the finish makes me forget about the spice. I could drink this every day!