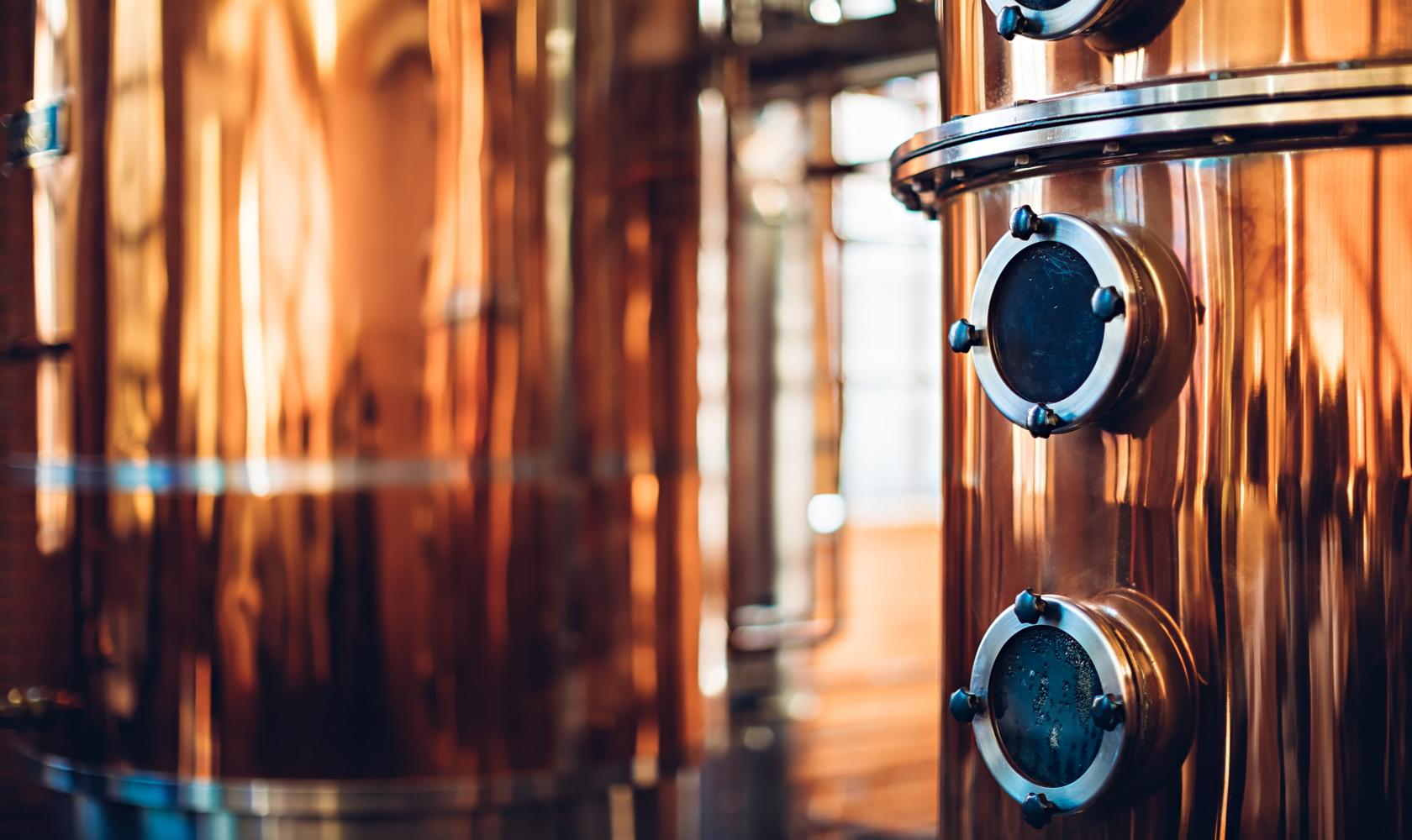 One of the key parts in the Whisky making process, distillation is where the alcohol created during fermentation is removed from the wash to form a concentrated liquid that goes on to be matured into Whisky.

Scotch is distilled twice and in some places, three times, although this is more commonly done in Ireland.

The wash from fermentation is poured into stills that are heated with steam. This can be done in two ways, in a pot still or in a column still.

In a pot still

Pot still acts as a large kettle that is heated. Alcohol boils at a lower temperature than water, and therefore will evaporate first. As the still is heated the alcohol evaporates and is separated off into another container called a condenser through the swan neck of the still where constantly running cold water turns the vapour back into liquid. In a column still

The wash is trickled down a series of plates, with steam rising up the opposite direction. The steam heats the alcohol as it goes and it evaporates off.

Traditionally stills have been heated with a direct flame from a wood, coal or gas burning fire. These days it is more likely to be done through steam that is piped into coils at the base of the still.

In this first distillation, lasting around 6 hours, the alcohol and some water is separated from the solids and liquids of the wash. The result is called low wines, which are at an ABV of around 21-30%.

These low wines must be distilled again as there are still some compounds present that are not desirable in the final product.

The second distillation creates an even more concentrated liquid as more water is removed. There is no chance of frothing either as there are no solids in the liquid.

The distiller must be sure of when to stop distillation, as different flavour compounds boil at different levels.This is called “making the cut”.

The ABV of the liquid that comes out after the second distillation is around 70%, with some distilleries such as Auchentoshan and Hazelburn going on to distil a third time. In order to assess whether the liquid can be cut or not, the distiller must look at the run of the liquid that has been produced. This is done through a Spirit safe, a small metal box where the distillate can be viewed.

The first to arrive in the Spirit safe are the “heads” or foreshots. These are compounds with a low boiling point such as methanol, acetaldehyde and some ethyl esters. These are elements that must be removed, for various reasons such as being unhealthy or unpleasant to taste. These are moved to another container called a feints receiver. Next to go through the Spirit safe are the hearts of the wash. This is the bit that the distiller wants to preserve, as it will go on to make up the new make Spirit that is then matured.

The distiller is able to manipulate the route of this Spirit and directs it into a intermediate Spirit receiver.

After this comes the tails of the Spirit, which is similar to the heads, as in they are undesirable. Again, the distiller is able to redirect their path and move them into a separate container from the hearts.

The distiller must know when to cut the Spirit, or in other words, when to change the speed of the running Spirit and when to start separate each different element of the liquid. This is what it means to make the cut.

This concentrated Spirit is then stored in a receiving tank ahead of filling into casks and left to mature for many-a-year in the warehouses. By the way, if you are a true Scotch connoisseur: Flaviar offers Scotch-themed subscription boxes, including high-end and rare Scotch Whisky brands! AND did you know that Scotch does not have to be expensive? Browse our selection of best Scotches under $100!