Distillery
Founded in 1965
Tomintoul is housed on the well manicured grounds of the Glenlivet estate. Standing in Ballindalloch, in the Speyside region, Tomintoul rests in what is known as Strath Avon, the valley of the River Avon.

Tomintoul is a recent addition to the Scotch Whisky canon, being one of only a handful of outfits built in the second half of the 20th century. Founded in 1964 by two traders from Glasgow, production began at Tomintoul the following year and passed through a series of changing regimes until falling into the hands of Indian tycoon Vijay Mallya.

The majority of Tomintoul Whisky (all but as little as 2%), is used for blended Whiskies, although the occasional official release has appeared. Four steam heated wash stills and spirit stills, form the heart of production and are fed by water from Ballantruan, and two small lakes in the Cromdale Hills.

Tomintoul touts a production capacity in excess of three million liters per year. Their spirits are matured in a combination of ex-Bourbon, refill hogshead and Oloroso Sherry casks.

The Flavor Spiral™ shows the most common flavours that you'll taste in Tomintoul Scotch. It's based on all Tomintoul drinks in our large database and gives you a chance to taste Tomintoul before actually tasting it.

Dog Dogson's
Smartass Corner
Tomintoul is almost the highest distillery in Scotland, sitting at an elevation of roughly 1200'.
About
Speyside
Glens a plenty, history in abundance - that's Speyside. 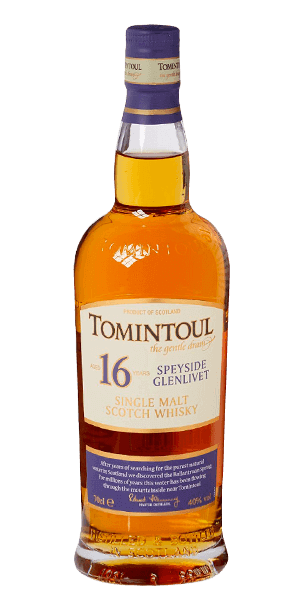 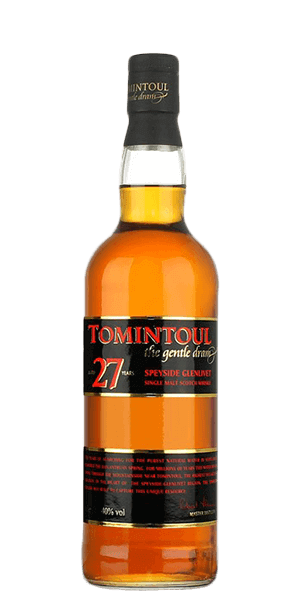 Tomintoul
With A Peaty Tang
Scotch
8.1/10