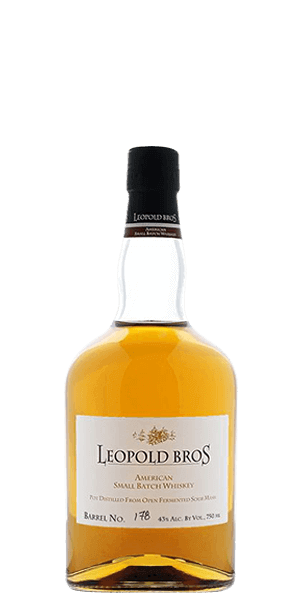 In 1999, Scott and Todd  Leopold opened a brewery in Ann Arbor, Michigan, called Leopold Bros. -- however, they soon expanded to distilling and released their first spirits in 2001. In 2008, operations moved to Scott and Todd's home state of Colorado, which is also where they get their first-class grain from.

The distillery has been well-known for its eco-brewing techniques, using organic ingredients and effective management of water and waste byproducts. And you can imagine that combining such awareness and responsibility with pre-prohibition standards makes for one hell of a Whisky.

The brothers use many techniques from the Whiskey-making traditions that predate prohibition. The traditional sour mash of corn and rye (there’s as much corn here as you would find in Bourbon) is fermented at colder temperatures but without refrigeration -- this way the Whiskey develops a softer flavor. The Whiskey is then distilled in a small batch copper potstill, and barreled at the Pre-Prohibition standard of 98 proof. To cap things off,  each bottle is individually numbered as it is filled directly from the barrel. The Leopold Bros. Whiskey is aged for less than two years, so if you like your spirits light on oak, this one should be a nice fit, neat or in cocktails.

The Flavor Spiral™ shows the most common flavors that you'll taste in Leopold Bros. American Small Batch Whiskey and gives you a chance to have a taste of it before actually tasting it.

Ivan, Feb 3, 2020
This was pretty bad, I am going to save this bottle for mixing drinks only.

Tyler, Jan 2, 2019
I enjoyed this whiskey. Pretty smooth in my opinion. I tried based on a recommendation from my mom

Veronica, Dec 18, 2018
Has a Smokey after taste or something, blah not for me

Olan, Mar 8, 2018
Sounds harsh but true. Save your money and buy a bottle of regular Jim Beam. I like my whiskey and bourbon straight and pure but this would be better for cleaning carburetors than drinking.

JUSTIN, Jan 17, 2018
It's a smooth whiskey. It just has a real grainy taste on the back end. it comes through even when mixing with coke.

Paul, Oct 12, 2017
A good whiskey! A little on the light side for me, but completely drinkable.

Antti, Aug 21, 2017
I was able to enjoy a bottle of Leopold Bros American Small Batch Whiskey Barrel Select, 2017. It was a very good, delicate Whiskey with a birth fresh rye & corn that gave way to hints of vanilla & oatmeal cookies. A mild life with notes of vanilla, pears, raspberry & rock candy; while it's death is clean, balanced & pleasing.

Luke, May 20, 2017
Dry and peaty. Not my flavor profile but clean with a light finish.
Load more reviews