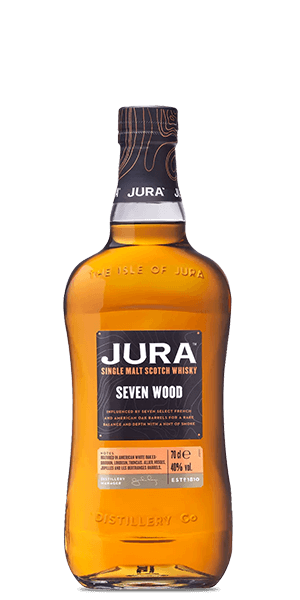 A Single Malt true the Jura style with new levels of flavor complexity.

Not much happens on the island of Jura. This Scottish island just north of Islay has a population of 5000 red deer, but only 200 people. But Jura has long had its namesake Whisky — ever since the Jura Distillery was founded in 1810. The facility fell into a bit of disrepair in the early part of the 1900s, but was resurrected again by Robin Fletcher and Tony Riley-Smith in 1963. Things have gone well since then and Jura is now a highly respected Single Malt once again with fans around the world who crave their hybrid island/lowland style.

It is common knowledge that wood is vastly important to the flavor of aged whiskies. Heaven knows we all spend a lot of time talking about it. With a name like Isle of Jura Seven Wood, you immediately understand that the good folks at the Jura Distillery are taking this concept to an entirely new level.

Yes, it’s made with seven different kinds of casks. This Single Malt has its primary aging in first-fill American white oak ex-Bourbon casks. Then it is finished in six different French oak varieties — Vosges, Bertranges, Jupilles, Allier, Tronçais, and Limousin. Each type of oak imparts a bit of terroir from one of six different forests across France, yielding an interesting complexity.

The Flavor Spiral™ shows the most common flavors that you'll taste in Jura Seven Wood and gives you a chance to have a taste of it before actually tasting it.

Flavor / Taste / Palate
On the palate look caramel, peach, liqouroice, candied orange and a hint of sea spray and smoke.

Finish
The finish is heavy with vanilla, flamed orange zest, and a smoky aftertaste. 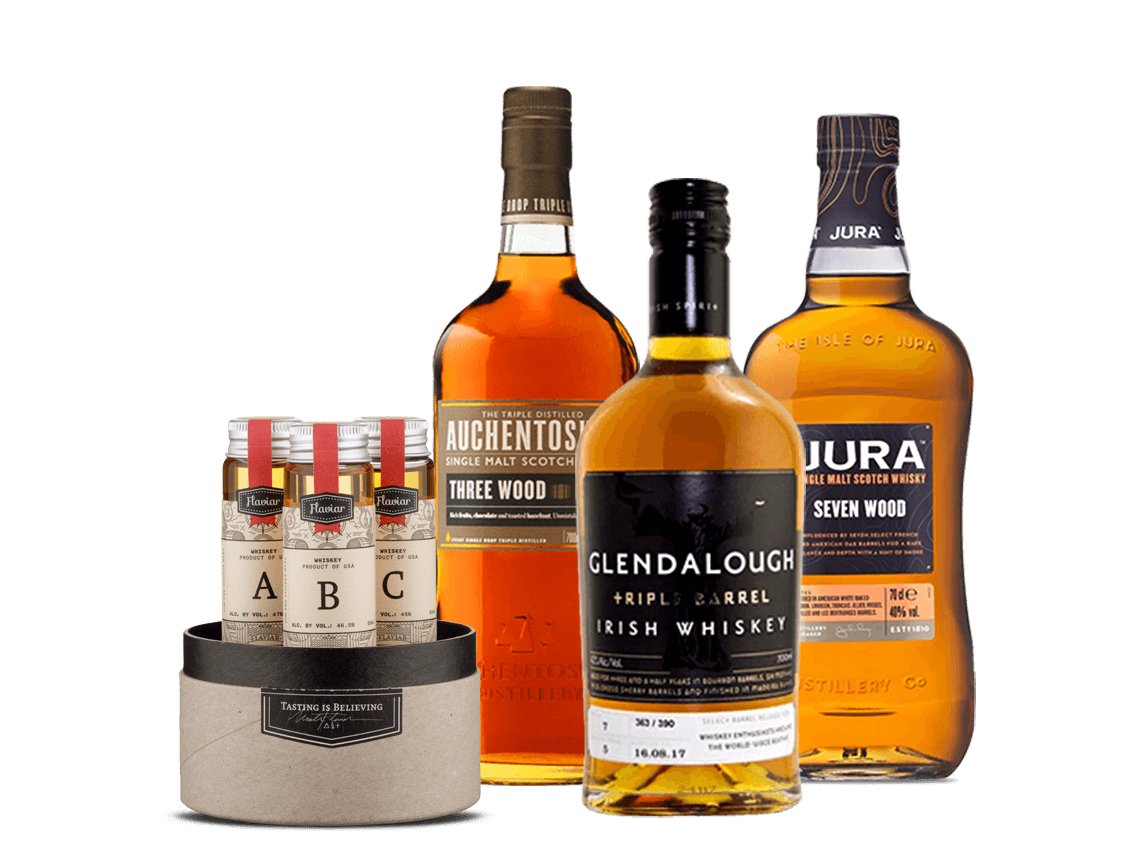 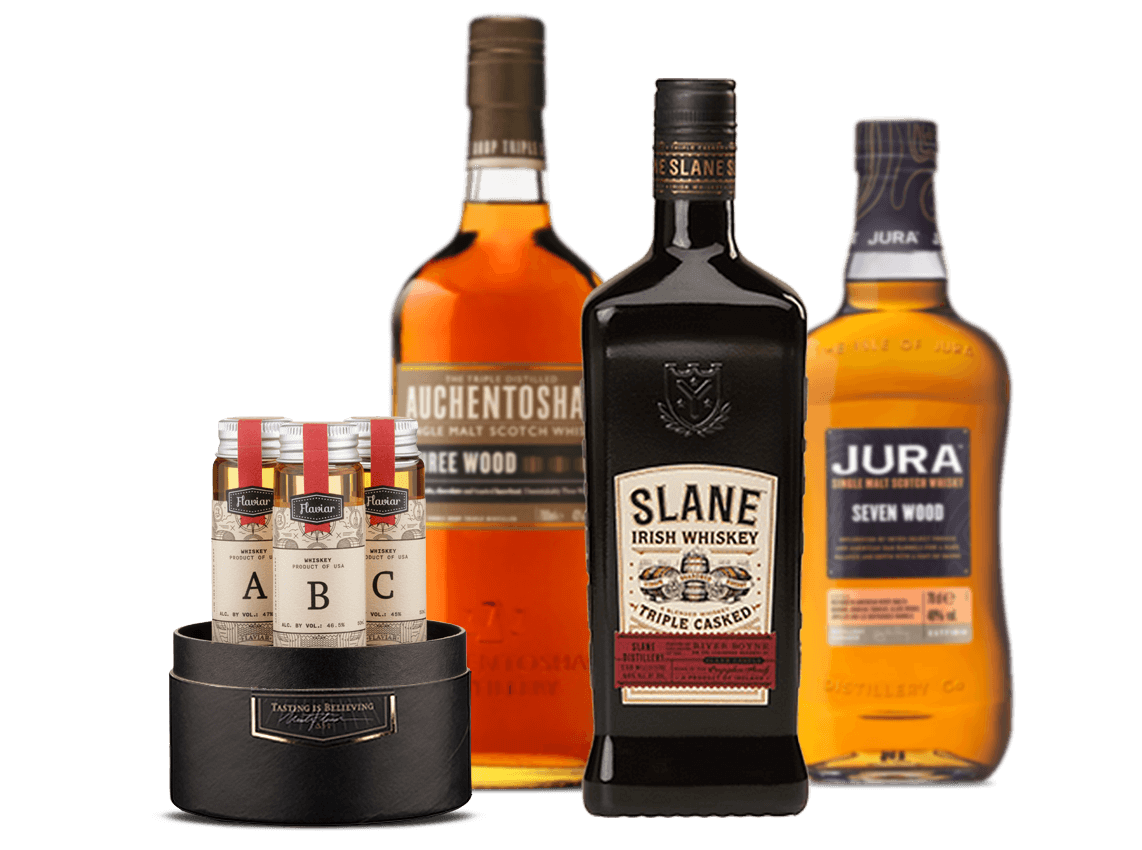 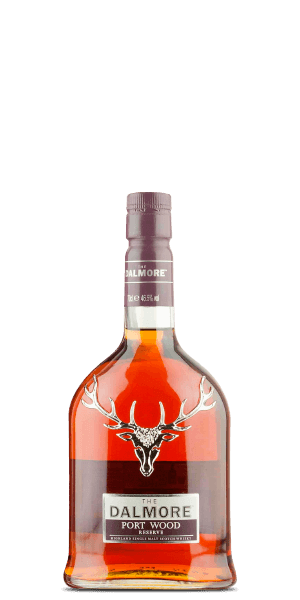 Simon, Jan 10, 2021
Definitely get strawberry jam on toast on the nose, while the palate is quite complex with lots of nuts and wood, more jam and some earthy coffee to boot. Dark chocolate and vanilla linger, but I don't get any smoke. Would happily buy again.

Krissy, Dec 10, 2020
Really nice strong coffee notes, slight burn. I tasted more smoke than was called out on the spiral & I didn’t pick up peach but my tongue might just be lousy at this.

Aaron, Sep 11, 2020
Spiced gingerbread, red fruits, and an interesting bright grassy/herbal note on the nose. Light smoke, heavy wood in the flavor with an interesting charred finish and just a touch of black coffee. A bit too much wood and pretty one-dimensional overall. Not a bad dram, but nothing noteworthy. 6.5

Antony, Jul 23, 2020
Lovely drop. Different smells on the nose as I taste it, with a soft warmth followed by a gentle smokey aftertaste.

Antti, Jun 11, 2020
It is a classic, complex, Single Malt Scotch Whisky that has an aromatic birth; while a complex life leads to an elegant death with notes of heavy vanilla, flamed orange zest & smoke.

Jeremy, Apr 26, 2020
Lovely. Wasn't disappointed. Smooth oak throughout, but not too complex

Nicholas, Apr 10, 2020
Solid, not a ton to it. Lots of wood with some spice and fruityness as it hits at the top

Jeremiah, Mar 29, 2020
Not bad, not great. Enjoyed it a little bit more after a little splash of water in it.

richard, Dec 19, 2019
This is the only taster I’ve had EVER that I can’t finish. Way too salty, burned wood more than smoke flavor—no chocolate, orange zest, or anything else described. The flavor wheel fell off this bus—avoid this completely!!

Rod, Aug 14, 2019
Tried this based on liking the Prophecy (since they changed their whole line-up and discontinued Prophecy). Its just awful. Not sure what they were trying to accomplish with the 7 barrels but they failed. Harsh, unforgiving and just not drinkable.
Load more reviews