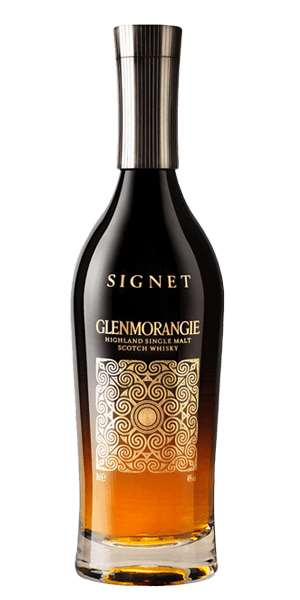 The Glenmorangie Distillery was founded in 1843 when the Matheson brothers converted the Morangie farm into a distillery. It lies just north of Tain, on the wind-swept coastline of Easter Ross. Their stills are the tallest found in Scotland – as tall as a giraffe, apparently – of the same design as those used in the 1880's which were in fact second-hand Gin stills. Which means that only the very lightest vapours make it to the top, resulting in a smooth and elegant Scotch Whisky.

In 2004 the distillery was sold to LVMH, a French multinational luxury goods conglomerate and has since adopted a brave strategy of giving their drams French-sounding names, which on the looks of things, has payed out for them.

The Signet is one of Glenmorangie's most unusual creations. It's a combination of two different types of malted barley – high roast chocolate barley malt, which is normally used to produce brown ales, porters and stout Beer (they're more roasted, or caramelized, than what is standard in making Whisky), and Cadboll barley malt from Glenmorangie's own estate, adding creaminess to the final dram. Additionally, 'an element' of Glenmorangie's oldest stock is used, aged from 35 years up through 40 years. The Signet is twice-distilled and matured in a variety of Sherry and new charred oak casks.

Master Distiller Dr. Bill Lumsden spent his days as a student at Glasgow University experimenting and testing with many varieties of malted barley commonly  used in Beer production. We could say that the Signet is the apex of his many years of sipping, trials and errors. So, here's to vision, persistence and well, tasting!

The Flavor Spiral™ shows the most common flavors that you'll taste in Glenmorangie Signet and gives you a chance to have a taste of it before actually tasting it.

Steven, Jan 22, 2020
The chocolate and orange notes are delightfully satisfying!

Betsy, Dec 4, 2019
Tasted at Whisjey West and loved the honey and lack of smoke

Taylor, Aug 3, 2019
Wonderfully rich and decadent. This is a dram that makes the knees weak.

Doug, Feb 13, 2019
Remarkable whisky. Bottled at 46% and much less heat than the 18 year old, which is at 43%. Smells primarily (to my nose at least) of oranges, cocoa and a bit of oak. Chocolate taste really comes through, along with oranges (of course!), vanilla and a bit of cinnamon. Very nice mouthfeel...kind of syrupy. Just a wonderful whisky but man it's expensive.

Nathaniel, Dec 29, 2018
Very smooth and much less peaty than their regular offerings.

Heather, Dec 10, 2018
Attendees at a tasting I hosted lost their minds over this one. Outstanding!!! There was clearly something for everyone here because we have widely varying palates and preferences.

Kimberly, Nov 26, 2018
My favorite scotch by far. The hint of chocolate is unique.

JAKE, Jul 26, 2018
Another fabulous addition to the home bar. Nose of plum/currant/raisan followed by a nice mix of coffee and tobacco on the palate.

Tom, Jul 17, 2018
my absolute favorite whiskey, or any alcohol for that matter

Anthony, Mar 20, 2018
An absolute gem! Different flavor than most but fantastic.