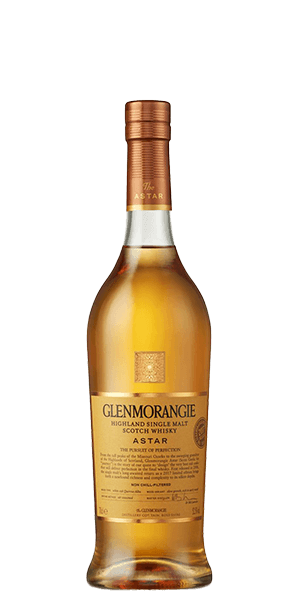 The Glenmorangie Distillery was founded in 1843 when the Matheson brothers converted the Morangie farm into a distillery. It lies just north of Tain, on the wind-swept coastline of Easter Ross. Their stills are the tallest found in the Highlands - as tall as a giraffe, apparently - of the same design as those used in the 1880's which were actually second-hand gin stills. Which means that only the very lightest vapors make it to the top, giving a smooth and elegant Whisky.

In 2004 the distillery was sold to LVMH, a French multinational luxury goods conglomerate and has since adopted a brave strategy of giving their drams French-sounding names, which apparently has payed out. Glenmorangie was Scotland's best selling single malt almost continuously since 1983 (it has recently lost the position to Glenfiddich).

The Glenmorangie Astar has a long journey to make before it is ready for s(h)ipping. First, special casks are assembled using hand-select oak from the Ozark Mountains, Missouri. This wood has grown slowly enough to create a spongier and more porous wood which is perfect for welcoming the spirit and imparting the maximum amount of flavor. After that casks are air-dried (instead of kiln-dried) for at least two years. Then they are filled with Tennessee Whiskey and left to mature for four more years. Finally, the casks are transported to the Glenmorangie distillery for slow maturation of their Whisky.

The Flavor Spiral™ shows the most common flavors that you'll taste in Glenmorangie Astar and gives you a chance to have a taste of it before actually tasting it.

Finish
Strong and creamy.  Warm and spicy with a mix of almond, coconut, honey and oak.

Comment
A powerful dram that needs a drop or two of water to open up.

Jared, Jun 27, 2019
Very nice! I was expecting a harsh "bite" because of the abv. But, it was really smooth. Vanilla/spice in the beginning, with a nice, almost nutty finish.

Justin, Jan 21, 2019
Found it to be very smooth for alcohol level, especially enjoyed over ice

Matt, Sep 14, 2018
Simply one of my favorite drams. Must have a bottle around the house.

Lane, Jun 22, 2018
This is my favorite glenmorangie offering so far, nice first taste with a small bite followed by honey and spice finish! added just a splash of water and it really brought out the sweetness, I will be getting another bottle!

Blake, Apr 3, 2018
Wow! Love this. Have been waiting a few years to grab a bottle of this. Admit my biases: Glenmorangie is my favorite Scotch brand, I was born in the Ozarks where the particular Ozark Oak for the barrels was grown & harvested, and I grew up in TN 25 mi north of Jack Daniels Distillery (where the barrels were sent to hold TN Whiskey for 4 yrs to soak into the wood for taste before being sent to Scotland to mature the Scotch). But still, wow! It is smooth, has a unique oakiness to it, and a tinge of TN whiskey! Superb sipping whiskey!

guest, Feb 12, 2018
Nice but very heavy on the oak. Was looking for a bit more complexity.

Christopher, Jan 11, 2018
This year's batch is even better than the one from 2012. Smooth for a boozy scotch (over 100 proof), strong vanilla, sweet and spicy. My favorite scotch.

guest, Jul 25, 2015
Excellent strong rich finish, not one to be rushed or trifled with, definitely needs a drop of water ( which normally I would shun) to bring the flavour up
Load more reviews