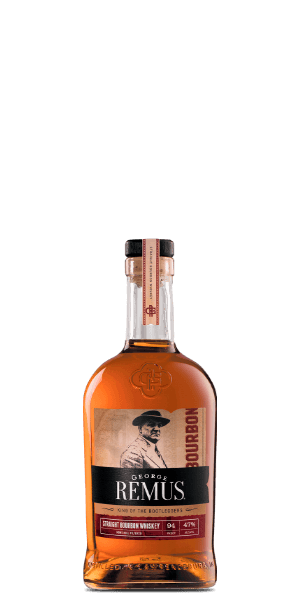 Buyer Protection
Money-back guarantee if things go wrong.
A flagship Straight Bourbon proves that MGP saved some of the good stuff for themselves.

George Remus Bourbon is named after a legendary Whiskey-man who operated on both sides of the law during Prohibition, earning the nickname "King of the Bootleggers." The George Remus line-up is comprised of high-rye Bourbons aged over five years. Owned by and made in one of the country’s most historic distilleries (MGP), George Remus is perfectly blended from premium stock to become your go-to Bourbon.

First thing first… George Remus is a line of really good Bourbon. It’s also the first flagship Bourbon produced, owned by MGP. George Remus Straight Bourbon is the entry-level for the range. The mash bill is not stated, but we know that MGP has five Bourbon mash bills in production. And while they could have blended them, we think that the flavor profile suggests their 60% corn, 36% rye, 4% malted barley mix. And it’s aged more than five years and bottled without chill-filtration at a lovely 47% ABV.

Smartass Corner:
The brand is named after George Remus — a renowned lawyer and bootlegger from the Prohibition era. He was arrested and convicted and allegedly served as inspiration for the title character The Great Gatsby in the novel of the same name by F. Scott Fitzgerald.

The Flavor Spiral™ shows the most common flavors that you'll taste in George Remus Straight Bourbon Whiskey and gives you a chance to have a taste of it before actually tasting it.

Flavor / Taste / Palate
The flavor profile is vanilla-forward with plenty of caramel, cocoa, and dried fruits.

Finish
The finish is medium length, warm, and sweet with a smoked pepper kick in the back of the throat.

Derrell, Jul 15, 2020
Had this the other night at the local cigar bar. Smooth, flavorful, and just an enjoyment to drink. I will definitely be getting a bottle the next time i see it.