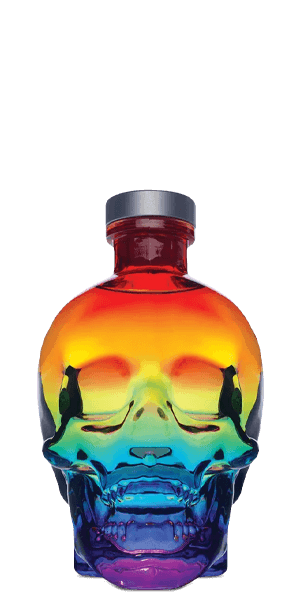 Did you know that big-time comedy superstar Dan Aykroyd founded the House of Blues bar and music venues? It’s true. He is also a big fan of cocktails and when he couldn’t find a pure Vodka in the US without additives he founded Crystal Skull Vodka with artist John Alexander in 2007. Each edition is quadruple-distilled and filtered seven times for purity. The last three filtrations pass through thousands of "Herkimer Diamonds" from New York State. Each Italian-made glass decanter is shaped like a human skull, inspired by the legend of the "thirteen skulls."

The core Crystal Head Vodka is made from locally-sourced corn — and since Crystal Head is based in Canada, local means Canadian corn. The Spirit is distilled four times and filter through those famous crystals before being cut to proof at 40% ABV. This is the signature Spirit that launched the company. But this is a special limited edition collector version. That means that Italian glass decanter has been tinted to reflect the colors of the LBGTQ rainbow flag and a portion of the proceeds will go to support related causes.

Smartass Corner:
"Herkimer Diamonds" are not actual diamonds. They are naturally-forming, multi-faceted quartz crystals that formed in soft, volcanic dolomite as it slowly cooled.

The Flavor Spiral™ shows the most common flavors that you'll taste in Crystal Head Pride Limited Edition Vodka and gives you a chance to have a taste of it before actually tasting it.

Flavor / Taste / Palate
The flavor profile is velvety and clean with a nice grain-forward sweetness and a hint of pepper spice on the back palate.

Finish
The finish is quick — as a Vodka should be — with a soft, warming sensation.