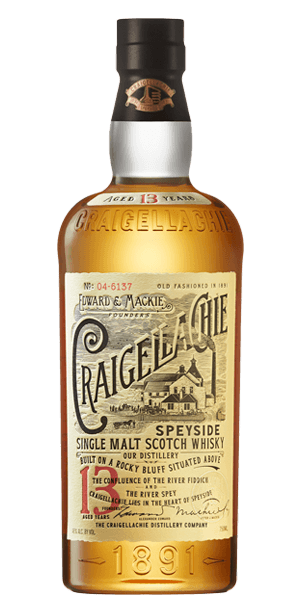 Craigellachie (pron. Krai-GELLachy) distillery is located in Aberlour, Banffshire near the village of Craigellachie, at the centre of Speyside. The distillery was built by Peter Mackie, who already owned Lagavulin distillery, in 1891. At that time, Whisky experts noted that Craigellachie represented a style of Whisky "seldom met with now", referring to their usage of worm tubs to cool their Spirit, and bestow it with extra flavor; something they continue doing to this day. Worm tubs are an old-fashioned condensing system, an intestine-like ring of metal coils submerged in cold water. It is through these coils that the Spirit is passed and cooled slowly, resulting in a curiously meatier Spirit. Only a few other distilleries, such as Old Pulteney, Glen Elgin, Mortlach and Springbank also use worm tubs.

Craigellachie 13 YO is one of three Craigellachie bottlings released in 2014. Meaty and oily, as is typical for this distillery, the 13 year old shows a lot of talent, especially at this price. Curiously interesting, the 13 year old exhudes characteristics of an older Whisky, more in the range of 18-20!

The Flavor Spiral™ shows the most common flavors that you'll taste in Craigellachie 13 Year Old and gives you a chance to have a taste of it before actually tasting it.

James, Mar 14, 2021
I first tried this in Scotland. It's not so smooth, but it's definitely tasty. I bit of burn on the way down so if that's not your thing, you might want to sample it first.

John, Feb 5, 2021
Modestly priced but excellent and complex, apples, a hint of smoke and a hint of tropical fruit after the first dram. Really enjoyed.

Tyler, Dec 30, 2020
This is up there with Glenfiddich 14 for my favorite modestly priced unpeated scotch whisky. Honey, peaches, apples, green grass on the nose. Custard, mint, mineral water, a bit of pepper and fall spice, sweet tea, and marmalade on the palate. Medium finish, and lingering mint and pepper. Amazing stuff for the cost.

Tim, Dec 27, 2020
One of my favorites whiskies. Doesn't disappoint with lots of flavor, complex nose and a great finish.

guest, Dec 3, 2020
Nose is interesting, lot of apple with an underlying yeast or bread aroma. Initial taste was sweet vanilla and apple with some spice at the end. Tasted more oak with some water. It is a peated Speyside but I could only pick up some smokiness in the first dram.

Catherine, Jul 15, 2020
Smooth with a bit of a kick on the back end. Slight fruity flavor

Guido, Jun 8, 2020
Love it. interesting taste, complex nose. and now I know why too, after reading about it.

Bob, Jan 6, 2019
I received this as a Christmas gift from my daughter and her boyfriend and really love it! I’d describe it as a sort of blend of Lismore 15 (my favorite) and a Laphroaig 10. A bit peaty at first (like the Laphroaig) but very smooth (like the Lismore). I’ll be keeping a supply of this in my bar.

Christopher, Dec 5, 2018
Nose: Pineapple. Necatrines. Sour notes. Vanilla underneath. Honeysuckle. Really lovely. Palate: Malted barley. A nonpeaty smokiness. Quite interesting. Some heat. Almost chili-like in its character. Leathery tannins underneath, but not overwhelming. Honeydew melon on the back end. Finish: A lingering heat, along with that leathery smokiness. Nice. For the price, this is a lovely—and unusual—Speyside.

Mats, Sep 7, 2018
One of the absolut best bourbon matured whiskies I have tried. A very nice "dirty" vanilla, honey and maybe a bit of leather. A must for all good whiskylovers

Kyle, Aug 11, 2018
I was excited to try this speyside and was not disappointed. The aromas of oak and oiliness came forward first and the flavors on the first sip were oily fruity. A nice bite to it as well up front but, as the whisky sits on your tongue, it mellows out.

Daniel, May 15, 2018
Beware, this is not your Father's Speysider! Strong malted barley on the nose with orchard fruits, hone, and hints of vanilla. Palate is a little hot with vanilla, honey, apples, citrus, and charred oak(?) The "meaty character" described on the bottle comes across as a slightly smoky tone. It's a non-smoke - a smoky tone without the smoke. Strange. Medium dry finish with a little more meat hanging on. Not bad. 7/10

Peter, Dec 23, 2017
Nice whisky. You taste the oiliness en the smoke. It has a great nose and good stay in your month👍🏻

Peter, May 4, 2017
Crisp, a touch of smoke and a wry clean finish. A good introduction to S Better Scotch for people who are new to the magic of it. A fine sipper.