Which Rye to Buy? These Are The Bottles Your Home Bar Needs 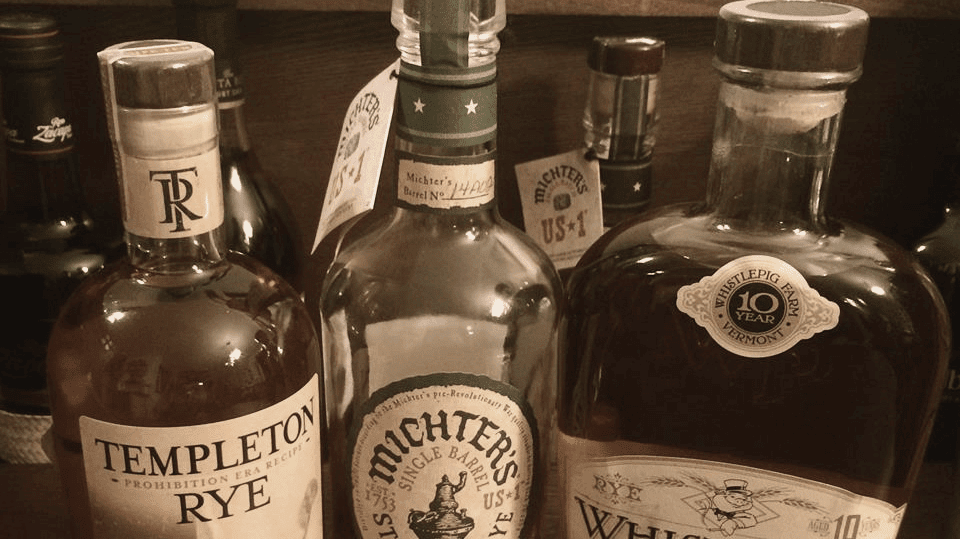 A good home bar is built on a solid foundation of Spirits. Previously, the question of what Bourbons should be in your home bar was asked and answered. Now it’s time to dive into the other member of the Holy Liquid Trinity – Rye Whiskey.

American Rye Whiskey. Three sweet words that only scratch the surface of the category.

For an American Brown Spirit to be labeled a Straight Rye Whiskey it must be distilled from at least 51% Rye and aged for a minimum of two years. And much like Bourbon, if it’s aged longer, there must have an age statement on the bottle. Bourbons are distilled from at least 51% Corn. And THAT makes the difference. Corn distillation produces a sweeter tasting Bourbon Whiskey while Rye presents as zestier.

For that answer, we turn to Shane Fitzharris, Executive Vice President of Global Sales for Templeton Rye Spirits. "With the growth of American Whiskey both home and abroad, every home bar, be it big or small should always have a staple American Rye Whiskey to drink neat, over ice or in their favorite cocktails. Because Rye Whiskey by its very nature bursts with pepper and spice it makes a perfect companion to all of your classic cocktails such as Old Fashioned, Brooklyn or The Sazerac.”

What is Indiana Rye Whiskey?
From the start of July 2021, Indiana Rye Whiskey has been a newly protected Whiskey category. Indiana distillers have won the right to own and regulate their unique style of Whiskey. The aim is to establish Indiana Rye in a similar way to how the state of Kentucky has promoted Bourbon.

In order for a Whiskey to be called an “Indiana Rye,” it must be either a sour or sweet mash with at least 51% Rye as the base ingredient. The juice has to come off the stills at a maximum of 80% ABV and bottled at 40% ABV or above, and it must be mashed, fermented, distilled, and barrel-aged for a minimum of two years in Indiana.

Which Rye to buy?

Templeton, Iowa, yes, Iowa. What you get with Templeton is a thoughtfully crafted Rye that has a delicious warmth, fruity aroma with a satiny finish that won’t shock your taste buds. With this amber goodness, you cannot go wrong.

This Pennsylvania classic Rye style was almost lost by shifting labor geography and American history. Founded in Monongahela Valley of Western Pennsylvania, this Rye is spicier, bolder than most modern Ryes. Thanks to Pittsburgh’s Wigle distillery you can get your hands on this once lost American treasure.

Founded in West Overton, Pennsylvania, in 1810, it is the Great Grandfather of Rye Whiskey. Old Overholt answers all promises on flavor makes no excuses about its presence nor does it apologize for not being cool. Overholt can be acquired in all major liquor outlets. If you’re lucky your Grandparents may still have a bottle in the bottom of their liquor cabinet.

A distillery that makes a high Rye Bourbon is the perfect place to get the perfect modern Rye Whiskey. At 90 proof, Bulleit Straight Rye Mash Whiskey isn’t a slap in the face, it’s a pinch from your Nana. Sweet, slightly spicy and ready to make any cocktail amazing – The Rye NOT your Nana.

A post shared by John - The Whiskey Cowboy (@thewhiskeycowboy) on

Aged from 4 – 6 years it does what a Rye is supposed to do, make cocktails taste great at a price anyone can afford.

Rye not try something new? Clyde May’s Straight Rye Whiskey is a young Spirit with a background in bootlegging history.

Clyde May was a convicted Alabama bootlegger who managed to make some damn fine Rye back in the day. And thanks to the modern upsurge in craft cocktail and forgotten Spirits, Clyde’s Rye is available for your home bar. You will win over anyone who is Rye curious.

A post shared by Clyde May's Whiskey (@clydemayswhiskey) on

Rye that’s surprising. An Irish distillery produced a Rye-based Irish Whiskey. The Kilbeggan Distillery, the oldest licensed distillery in Ireland, finalized an experiment- a rare Rye mash that produced a gem of a Spirit. It is a double-distilled, 86 proof Kilbeggan masterpiece. It’s a small batch marvel that is a must-have for any home bar. Owing a 750ml bottle will cost the same as a nice dinner for one. But impressing your Rye-loving friends - priceless!

Of course, there are a metric ton of different Rye Whiskeys out there. To start building you dream home bar, we suggest you also add (at least some of) these:
- WhistlePig 10-Year-Old Straight Rye Whiskey: If you see it for a good price, buy two bottles.
- Woodford Reserve Straight Rye Whiskey: A Louisville classic. Run, don’t walk (or drive) to the liquor store.
- Few Rye Whiskey: This Second City favorite should be first place in any home bar.
- High West Double Rye: This Rye hits like a punch from Clint Eastwood!
- Michter's Single Barrel Straight Rye Whiskey: A gentle giant that doesn’t cost a lot of beans.
- George Dickel Rye Whisky: Perfect for classic cocktails and modern ones.

Each one goes great on the rocks, neat or in a cocktail. How you and your guests decide to indulge is a matter of personal preference. Turn yourself into a confident sipper and discover Rye flavors with this Rye-themed Tasting Box. Connect with a like-minded community and explore the contents of your Tasting Box with Flaviar-Exclusive guided tasting called Unboxing Flavors.

If you have a favorite Rye or think we missed one, please let us know. We’ll check it out and add it to our list.