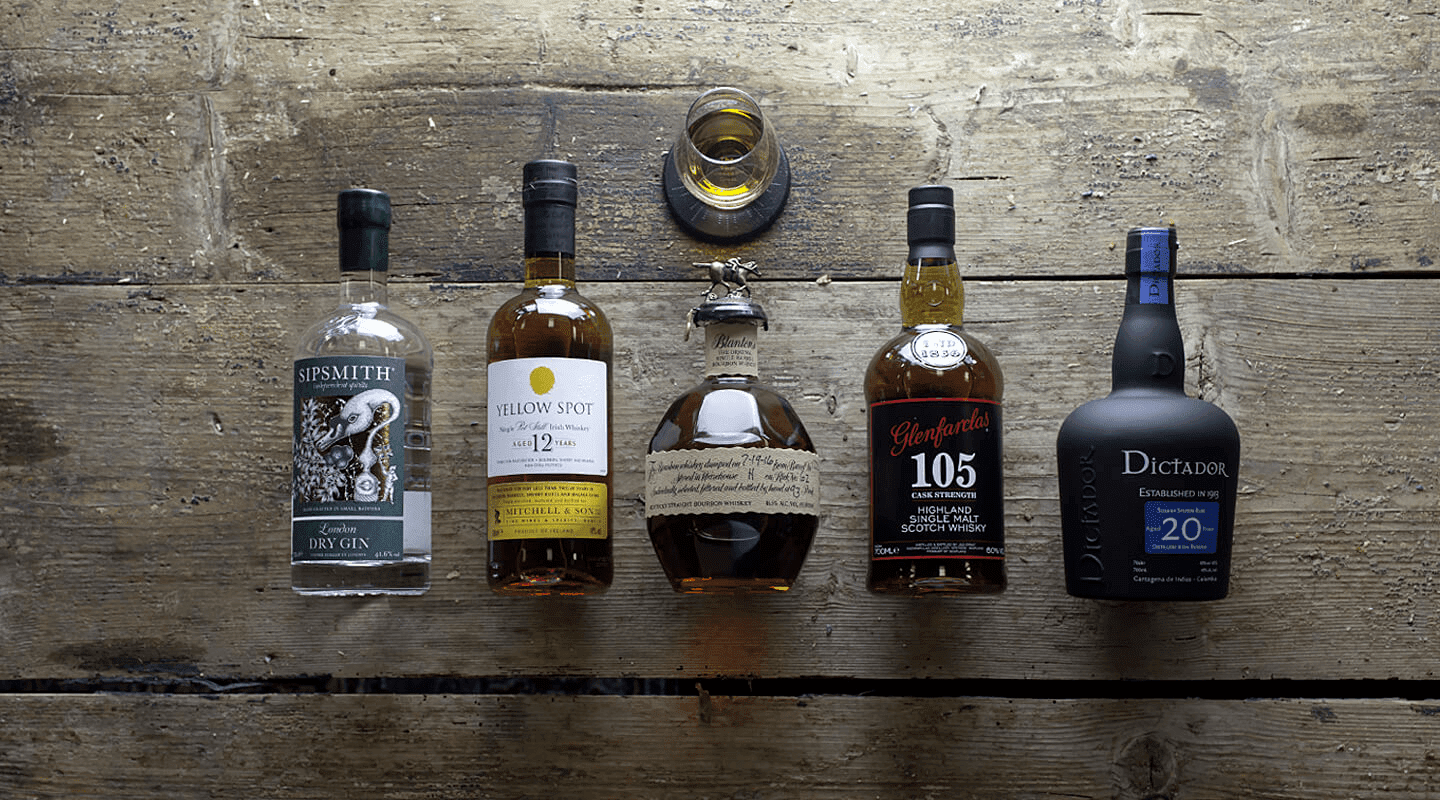 That’s right. It’s about that time of year again. We all know Flaviar is a place for the Spiritually gifted, but these Drams are in a league of their own. You spoke, we listened...

Through a simple algorithm (a combo of your ratings of all the Tasting Box Spirits released in the past year, your purchases, and the Flaviar tasting team’s input) we compiled a jaunty list of the top 5 hits of the past year, a veritable medley of joie de vivre that we know you’ll enjoy.

One Scotch, one Rum, one Gin, one Bourbon and one Irish Whiskey to rule them all. These Drams have made quite a splash. It is with pleasure that we present to you, our special yearly curated collection of fine spirits. Meet our 2017 Flaviar Community Award winners.

Mitchell & Son have been Irish Whiskey merchants since 1887, when they started contracting their own supply. They produce a limited batch of two varieties of Irish Whiskey; Green Spot and Yellow Spot, which they sell exclusively in shop. The unique name comes from a color coding technique they used to identify the casks.

Lorna Kavanagh, Senior Brand Manager, Redbreast & Spot Range with Irish Distillers, reveals some of the history behind Yellow Spot, and why it has become so successful: “They matured their Whiskey in casks under the streets of Dublin in a network of underground cellars. When the fortified wine casks were filled (exclusively with new make Spirit from Bow St. Distillery) and brought back to Mitchell’s, they were marked with a daub or ‘spot’ of paint which identified how long they would be matured for. Blue for 7 years, green for 10 years, yellow for 12 years and red for 15 years - hence the name Spot Whiskey.” 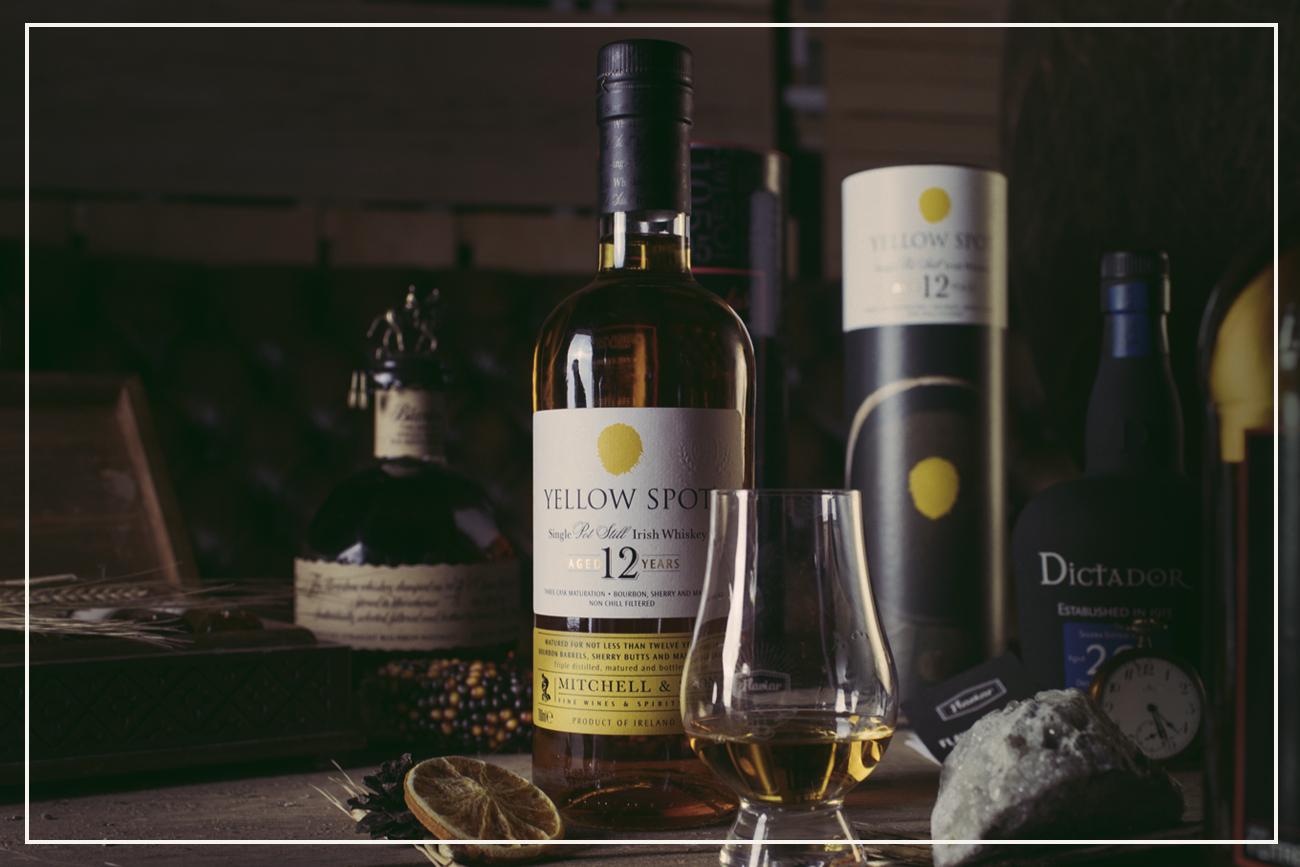 Yellow Spot is a traditional, single pot stilled, triple wood aged emerald gem, aged a full 12 years in 1/3 Bourbon, 1/3 Spanish Sherry, and 1/3 Malaga casks. The Malaga casks give the Whiskey a unique flavor. Malaga Wine is a sweeter fortified Wine from southern Spain, and the sweetness it adds is simply marvelous.

So why do people love it so much? “The Whiskey category continues to rapidly grow. New brands, new offerings from existing brands, and new to world Whiskeys that aren’t beholden to the “old rules” and ways of doing things are shaking up the Whisk(e)y landscape. Yellow Spot has been recognized as a unique Whiskey from the get-go and has gathered a loyal following.”

Yellow Spot has been recognized as a unique Whiskey from the get-go and has gathered a loyal following.

The brand has quite a unique personality... “The individuality of the range naturally appeals to less traditional Whiskey drinkers. The peculiarly named family of Whiskeys find their roots in one of Ireland’s last remaining Wine merchants and Whiskey bonders, Mitchell & Son Ltd. Back in the days when distilleries would sell their new make Spirit to bonders who matured them in Wine and fortified Wine casks, Mitchell & Son developed a reputation for creating some of the finest Single Pot Still Irish Whiskey to be found in the capital.”

Family owned for 150 years, Glenfarclas distillery produces single malts of exceptional quality, Glenfarclas is one of the most universally beloved Whiskies. The company is now in it’s 6th generation of Grant’s. They produce a Speyside-style Whisky, with a Sherry influence that has always been their signature style.

At 60% ABV Glenfarclas was the first to market a cask strength Whisky, in 1968. Despite its proof, this Whisky is very smooth. It has a deeply complex flavor profile. With notes of oak, apples, Sherry and spice, Glenfarclas 105 is complemented perfectly with a little drop of water. This opens the palate up to the depths of the taste. 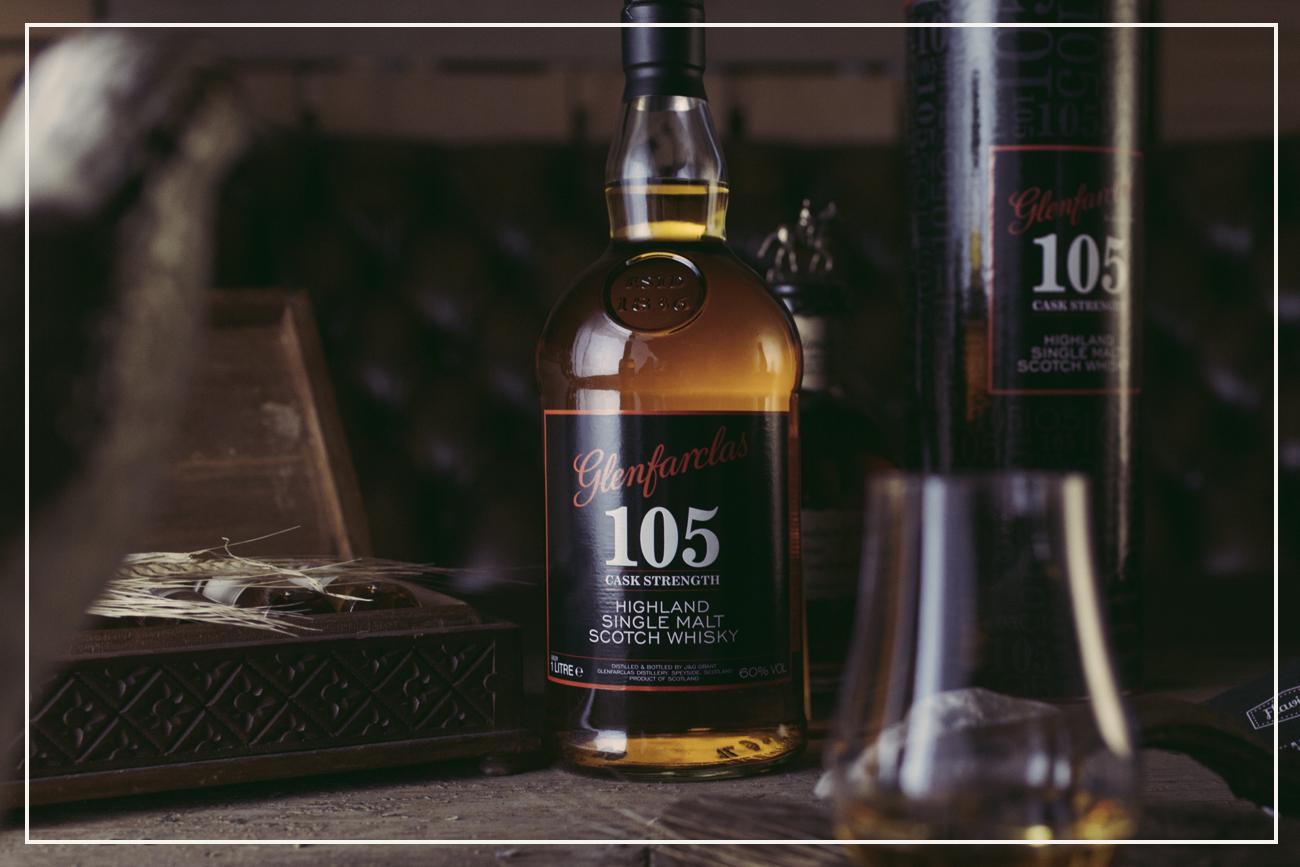 Taking over the family business, George S. Grant is the 6th generation of the family behind Glenfarclas Whisky: “I take great pleasure in tasting some of the old Whiskies that we made in the 50s and 60s…My grandfather experimented, by filling half a dozen Sherry casks and then deciding that Oloroso Sherry was the best and where we want to be. He continued on finding the best Oloroso Sherry casks that we could possibly get, which gave us the Glenfarclas Whisky we know and enjoy today.”

They also don’t use artificial coloring or finish in Wine casks, so each bottle has a distinctly different color: “…we’ve always been able to tell our customers about each bottle. Every bottle of our Whisky is a different color; we’re very proud of that fact and like to explain to people why it’s a different color. At the end of the day, you’re making a natural product. A lot of people just presume that Whisky is natural; they don’t know that it has added coloring or caramel in it. But we are using very good Sherry casks and that’s where the colors come from.”

…we’ve always been able to tell our customers about each bottle.

So what is it about Glenfarclas that turns Whisky drinkers into such dedicated fans? “I think it’s just that we’re all so passionate about what we do. Yes, we are a family owned and family managed company, but there are also a lot of other families heavily instilled in the history of Glenfarclas… It’s a very close-knit community and we are all very proud of what we see Glenfarclas doing.”

Colonel Albert B. Blanton belonged to one of the first Bourbon families, dating as far back as 1881. Blanton's quickly became a leading pioneer in the development of Bourbon. Their original Single Barrel recipe hasn't changed since 1984 when it was introduced and it is still done in the same manner as Colonel Albert B. Blanton did his private reserve almost a hundred years ago.

The Bourbon is selected from the center-cut of Warehouse H, which the Colonel believed to offer peak conditions for aging. This dram is just as unique as it appears, with its intricately subtle polyhedron shaped bottle, and cast metal stopper of a jockey riding a Kentucky Thoroughbred horse. It has balanced citrus and sweet notes of vanilla, caramel, and floral flavors.

The Original Single Barrel stands out amongst Blanton’s core range. 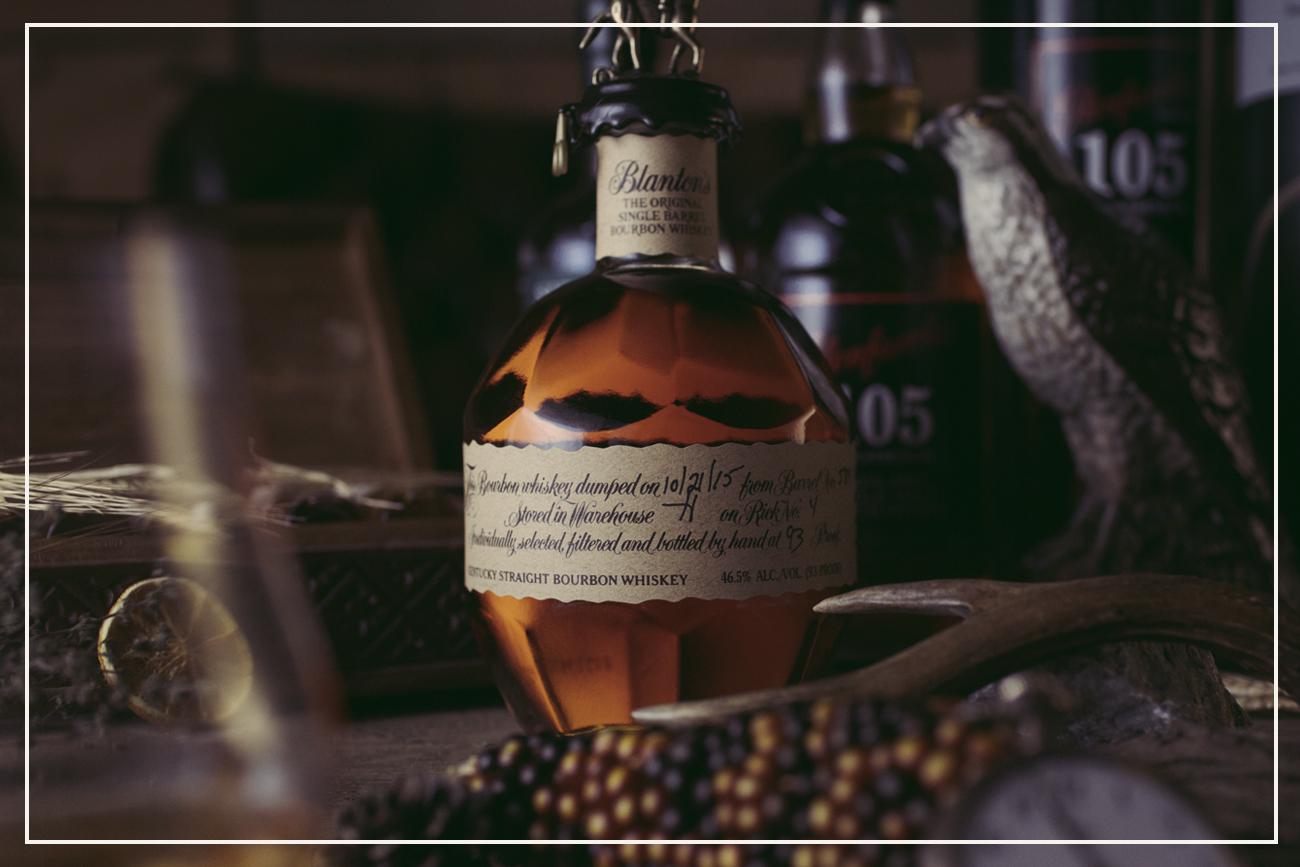 Kris Comstock, Blanton’s Senior Marketing Director of Bourbons, says the original recipe is something Blanton’s takes great pride in: “Blanton’s is well known for being consistently balanced in taste. It’s something that is near and dear to us since it was created by Elmer T. Lee in 1984, as the World’s First Single Barrel Bourbon.”

Blanton’s is well known for being consistently balanced in taste.

So what’s in the cards for Bourbon and Blanton’s? “We believe Bourbon will continue to grow as a category even stronger, and in particular for Blanton’s, we are putting more of it away to age every year. Thanks to the Flaviar Members for your votes! We are both humbled and thankful for your generosity!”

The history of Dictador goes way back, all the way to 1751, when Severo Arango y Ferro arrived to Cartagena, where his influence earned him the nickname of Dictador. It was here that a certain tropical elixir gained his affection. Severo’s love affair with sugar cane Spirits propelled him into the Rum trade, where he became the most important trader of different exotic and high quality Rums for the Cartagena area.

More than a century later, in 1913, Don Julio Arango y Parra, a descendent of the Dictador, established Destileria Colombiana, honoring his forefather with continued excellence in Rum production, as well as Gin. Dictator was the first Colombian Rum producer in the Caribbean Rum Zone. 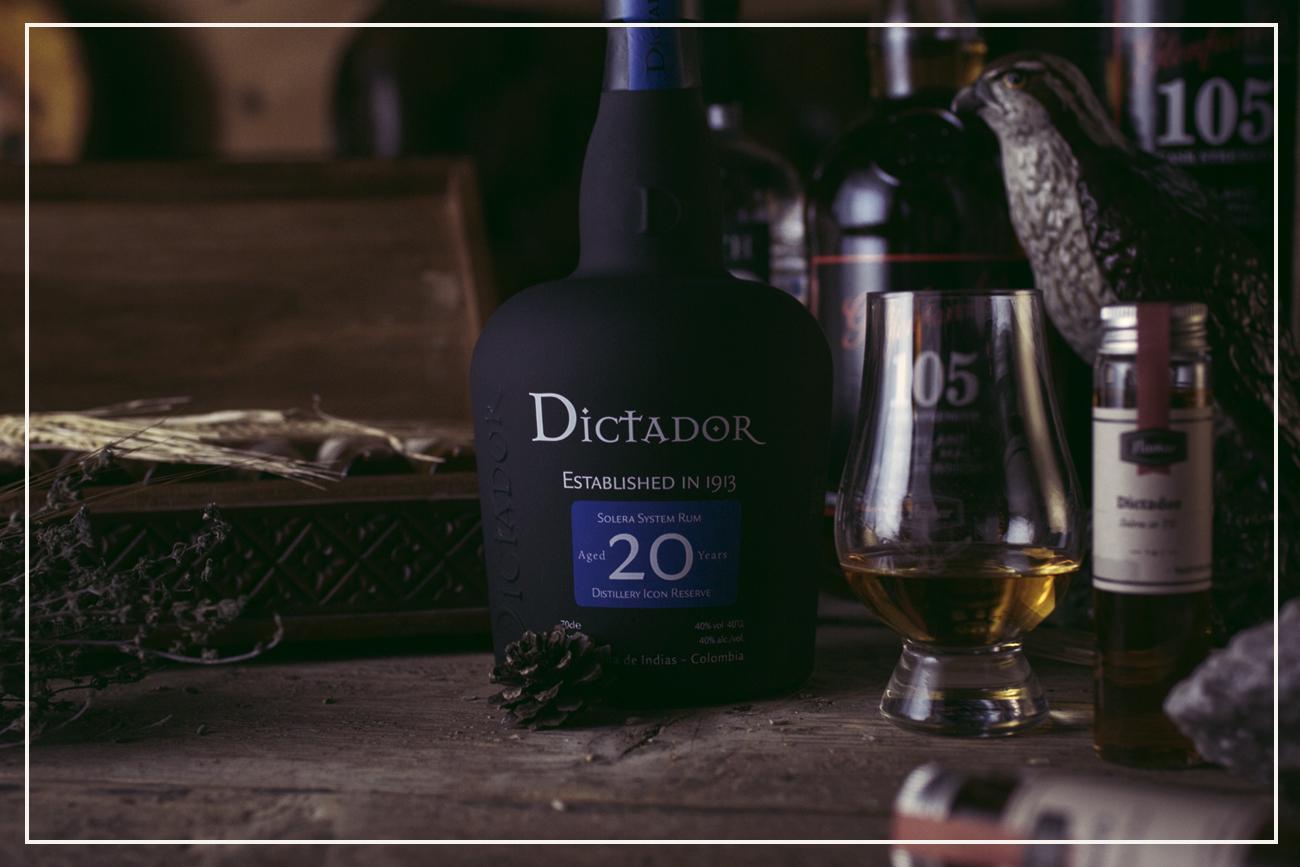 Dictador Solera 20 YO is one of the World's most awarded Rums. Among other numerous awards, they received a Double Gold at the SFWSC & WSWA 2012.

On Dictador being a Flaviar Community Award Winner? Marek Szoldrowski, President of Dictador Europe, says Dictador’s success is a testament to the company’s dedication: “Winning this award plus the many others in such a short space of time is a testament to Dictador’s dedication to making ultra-premium, high quality Spirits. Dictador 20 Years Solera System Rum is a toast to our masterful blending of traditional high-quality distilling methods with the best ingredients possible. We’re proud to expand Dictador’s reputation as the world’s most awarded Rum and as one of Colombia’s best distillers.”

Dictador 20 Years Solera System Rum is a toast to our masterful blending of traditional high-quality distilling methods with the best ingredients possible.

Dictador Solera 20 YO is made from the fermentation of virgin sugar cane honey and distilled partly in copper alembic and partly in steel continuous column. It's aged in second-fill oak barrels using the solera method for 20 years.

Sipsmith is a hive of purist craft distillers, whose take on classic London Dry Gin is one of the very best you can possibly get. Anywhere.

Based in Hammersmith, London, they were the first to launch under licence in London, some 200 years ago.…They source only the creme de la creme of English Barley for their London Dry Gin, enhancing it with 10 carefully selected botanicals.

Finally, the heart is blended with the exquisitely pure water of Lydwell spring and flowed through the Lady Prudence still, a traditional copper pot still that can distill both Vodka and Gin—made by the Christian Carl family in Germany. 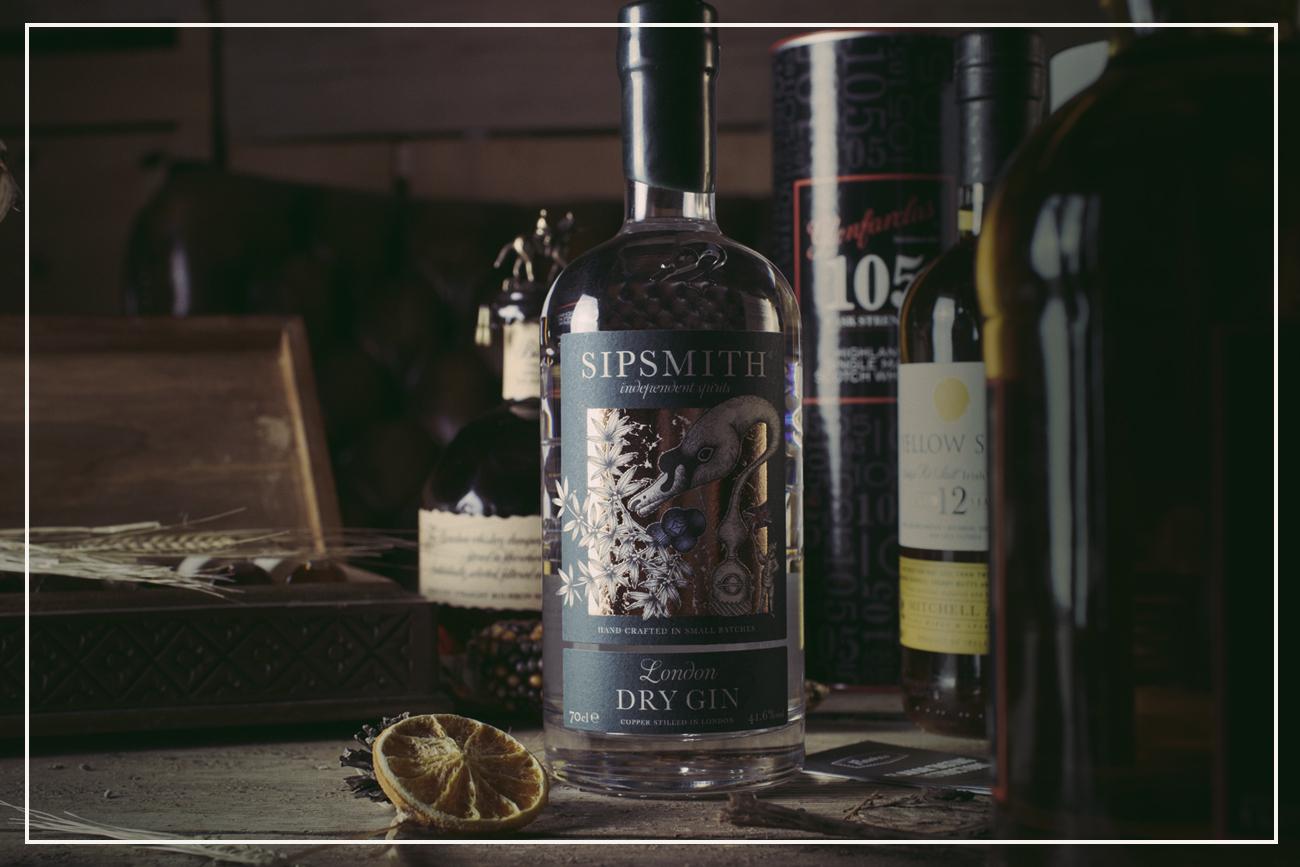 “We couldn’t be happier with the popularity of Gin today. It’s wonderful to see people discovering and enjoying this wonderful Spirit as much as we do. Sipsmith’s popularity comes from a number of factors. First, it is a faithful recreation of a true classic spirit made on far more accurate stills so that we can consistently make that best batch distillers a century ago might have gotten once in every ten.”

It’s wonderful to see people discovering and enjoying this wonderful Spirit as much as we do.

What does the future hold for Sipsmith? “Our most important plan for the years ahead is to continue producing our London Dry Gin, our VJOP and Sloe Gin and our London Cup exactly as we make them now. We will never take a shortcut with our Gin. While it would be difficult to say if we will launch a new product in the future, we are constantly experimenting both with new ideas and lost traditional formulas.”

So there you have it. One Scotch, one Rum, one Gin, one Bourbon and one Irish Whiskey guaranteed to steal your heart. So much greatness in one place. Kick back and enjoy these liquid versions of joy from around the world!