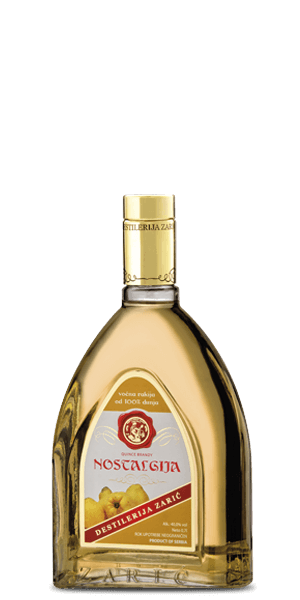 Rakija is the national drink of Serbia, and Zaric is one of the most famous traditional distillers. Zaric Distillery sits in a small mountain town about 85 miles southwest of Belgrade. They have been producing these fine Serbian Eau de Vie and aged fruit Brandies since the end of World War II in 1946. They produce a range of both aged and un-aged fruit Brandies that are becoming more and more popular around the world.

The quince is related to apples and pears and some think that it has the best qualities of both — having the floral aroma and tartness of a pear but remaining firm like an apple when ripe. Although originally from Turkey and central Asia, it has been cultivated all across Europe and the Middle East for millennia.

Zaric Nostalgia Quince Brandy is derived from local Serbian Quince farms. The fresh quince is pressed like cider, fermented, and distilled before being aged three years in oak. The result is a mellow and delectable Spirit at 40% ABV that pairs wonderfully with food.

Smartass Corner:
Many central European countries have their own traditional version of fruit Brandy. In Serbia the most popular is called Rakija — a clear, un-aged Brandy made from plums.

The Flavor Spiral™ shows the most common flavors that you'll taste in Zaric Nostalgija Quince Brandy and gives you a chance to have a taste of it before actually tasting it.

Nose / Aroma / Smell
The aroma is definitely floral and fruit forward with a nice oak note in the background.

Flavor / Taste / Palate
The flavor profile is both familiar and exotic at the same time, and the sweetness is mellowed with wood tones.

Finish
The finish is brisk and sweet.