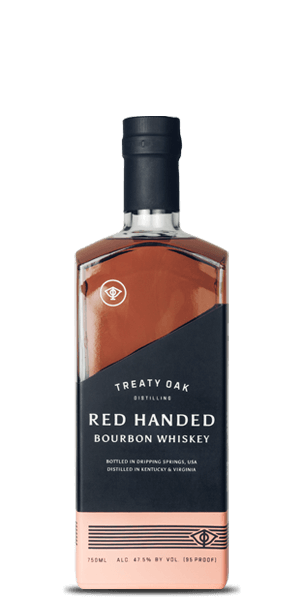 Treaty Oak Red Handed Bourbon is a sourced Spirit from the famous Heaven Hill Distillery in Bardstown, Kentucky, on the same stills used to make Evan Williams, Elijah Craig, Old Fitzgerald, and dozens of other premium Spirits using their classic Bourbon mash bill of 78% corn, 12% rye, and 10% barley. So, this Straight Bourbon comes with a good pedigree. It’s officially aged only two years. But it is also delivered at a healthy 47.5% ABV and comes with a handful of Gold and Silver Medals that testify to the quality of the dram.

Smartass corner:
Treaty Oak is named after a four hundred year-old tree in Austin. Stephen Fuller Austin was known as “The Father of Texas” and served as the first Secretary of State when Texas was an independent country. He signed the treaty establishing the official boundaries of Texas under that tree.

The Flavor Spiral™ shows the most common flavors that you'll taste in Treaty Oak Red Handed Bourbon and gives you a chance to have a taste of it before actually tasting it.

Luke, Apr 17, 2020
One of my personal favorites. It is a bourbon's bourbon with a smooth finish.