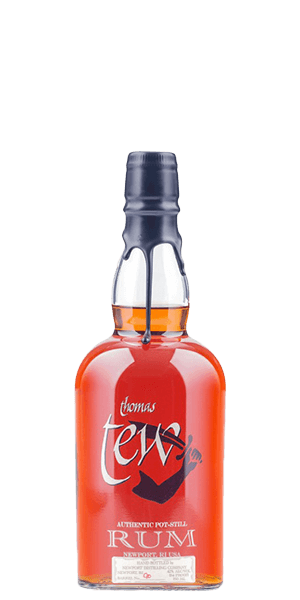 Buyer Protection
Money-back guarantee if things go wrong.
A real-deal single-barrel Rum without an artificial drop in the bottle.

Back in the year 1769, the town of Newport, Rhode Island, had twenty-two operating Rum distilleries. Sugar from the Caribbean was imported and processed, and the remaining blackstrap molasses was fermented with brewer’s yeast, run through copper pot stills, and made into Rum exported all over the world. But government got involved — the British Stamp Act greatly increased the cost of sugar in the colonies — and killed the industry. In 2006, Thomas Tew became the first licensed Rhode Island distillery in 135 years and brought traditional Rum production back to the East Coast.

Thomas Tew Single Barrel Pot Still Rum is hand crafted from start to finish — including labeling with the specific barrel identified on each one. Since the master distiller selects each barrel for bottling by taste, issuing an age statement is near impossible. But they proclaim — and we believe them — that there are no artificial colors or flavorings in this Premium Rum. The dark color and rich, spicy flavor therefore indicate a truth to be trusted beyond the label.

The Flavor Spiral™ shows the most common flavors that you'll taste in Thomas Tew Single Barrel Pot Still Rum and gives you a chance to have a taste of it before actually tasting it.

Flavor / Taste / Palate
Full on the palate with more baking spices, vanilla fudge, and a hint of tobacco leaf

David, Feb 7, 2020
Burns like a whiskey, but decent for a New England style

Jeremy, May 23, 2019
Excellent Rum! Very smooth and easy to drink neat. The flavor is just right and there's a bit of spice to it but not to much.

Tim, May 2, 2019
One of my favorites! Always have a bottle in my bar. Very smooth and goes well with a good cigar.