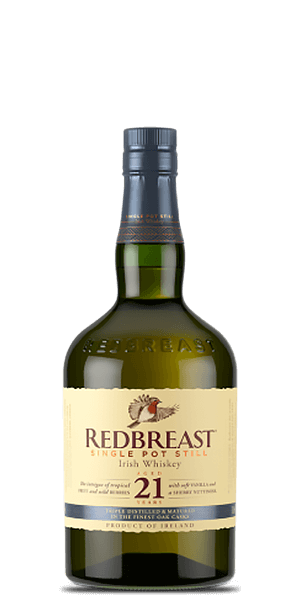 Redbreast Whiskies drip from the stills at their Midleton Distillery — a former wool mill, subsequently transformed into a what is now one of Ireland’s most iconic distilleries and home to the world’s largest still with a capacity of over 31,000 gallons. Redbreast sets itself apart by being one of the very few remaining Single Pot Still Whiskies and comes in four variants ranging from 12 to 21 years old. All of their expressions are well worth exploring.

Redbreast 21 has been called a masterpiece by a few big names in the Whiskey business.

They take the wonderful base spirit and hand it to a Jedi who uses the Force and other magic to transform it into one of the best — if not THE best — Irish Whiskies we’ve had the pleasure of tasting. It's aged for 21 years in first fill Sherry and Bourbon casks. If you're yet unfamiliar with Redbreast, this one makes for a great introduction.

Smartass Corner:
Single Pot Still Whiskey is rather unique and only a handful of Irish Whiskey shops still distill in this fashion. Oddly, the term has nothing to do with the still itself. It’s much like a single malt Whiskey, but it uses a combination of both malted and unmalted barley in the mash. And where a single malt Whiskey is usually distilled twice, Single Pot Still Whiskey is usually distilled three times, making the Whiskey taste a little earthier and bringing out the flavor of orchard fruits.

The Flavor Spiral™ shows the most common flavors that you'll taste in Redbreast 21 Year Old and gives you a chance to have a taste of it before actually tasting it.

Flavor / Taste / Palate
Rich and viscous, full-bodied and luscious with nectarine and leather with spice cake.

Finish
A long lasting tang of fruit, cream, and grain… like a French pear tart.

guest, Dec 9, 2019
Absolutely my favorite, hands down. I picked it up blindly in Ireland because a women told that if I picked this bottle up I’d make my wife a whisky drinker without fail. It worked and she now drinks it Neat with me on occasions. Thank you Redbrest!

Frederick, Nov 16, 2019
Very smooth with nice finish. My top of the list whiskey.

KEL, Sep 22, 2019
I get notes of caramel and hickory with a very smooth smokey mouthfeel.

John, Oct 28, 2018
The gold standard. I pull this bottle out when a snobby friend tries to discuss the inferiority of Whiskey to Whisky. No superlative is too big, too extreme, or inappropriate. Not often you would call an Irish whiskey over $250 a bargain, but this is. That said, the 12 and 15 yr old are all of a similar (though clearly not as high) quality and may be good stepping stones before reaching this, the pinnacle of Irish mass production whiskey.

Shawn, May 10, 2018
I received a sample of this through an Easter Egg order and it is fantastic. My wife does not like Whiskey of any kind. Period. She likes this. It is such a smooth drink. I have not tried the 15 year, so I may do that first before I plunk down the money for a bottle of this.

Michael, Apr 21, 2018
I expected more. Don’t get me wrong it’s a delicious whiskey but I’m not sure it’s worth the price.

Al, Dec 31, 2017
Elegant is the word that comes to mind. A smooth, flavorful Irish whiskey. I first tasted this at WhiskeyFest in Chicago and my drinking buddy and I both agreed it was among the to three we sampled that night. If you can’t afford the 21 year old, the 15 year old is a real value.

John, Sep 15, 2017
I love the Irish Whiskeys because they distill the peat out of them. This one is smoooooooth and tasty. No brainer to have this one as a part of your bar!

Jessica, Mar 11, 2017
Amazingly smooth. I experienced this phenomenal whiskey while attending The Whiskey Extravaganza in Boston. I am greatful that friends pointed out this expression.

guest, Mar 11, 2017
An absolutely amazing whisky. Definitely worth the price once you have a taste. I treated myself to this after having the 12 and 15 year old versions and it is worth the extra cost.

Jeff, Apr 13, 2016
Outstanding! Tropical, smooth and addictive. A must have for any collection.

Shaun, Apr 1, 2016
Redbreast is singlehandedly the best whiskey around.