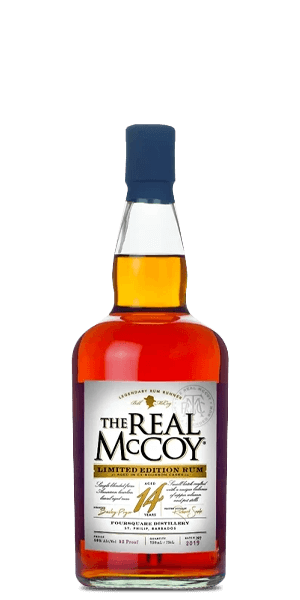 There are three core offerings in The Real McCoy lineup — the three year clarified, the five year, and the twelve year. But they have issued a few special limited edition releases that always get a lot of attention. And they are always tricky to get due to short supply. The Real McCoy 14 Year Old Rum is the latest and it is — in a word — fantastic. It is the same core Spirit in the five and twelve-year-old releases — a combination of column and pot distilled molasses Spirits from Barbados. And it has been aged in ex-Bourbon casks as well. But this fine dram has spent a few extra years in the barrel and is bottled at a perfect 46% ABV. And that’s a difference worth tasting.

The Flavor Spiral™ shows the most common flavors that you'll taste in The Real McCoy 14 Year Old Rum and gives you a chance to have a taste of it before actually tasting it.

Nose / Aroma / Smell
The aroma is light, but also deep and complex with notes of vanilla and coconut cream over a range of dried fruits with a light whiff of barrel char.

Flavor / Taste / Palate
The palate is seductive and a bit addictive with a complex mixture of Bourbon-like notes — vanilla, toffee, and apricot — dancing over more coconut cream, raisins, and baking spices.

Finish
The finish is long and warm and velvety with lingering fruit and cinnamon notes.

will, Mar 8, 2021
first time in a long time i have been disappointed in any 14 year old rum. i found it to be quite bitter and most certainly not a sipping rum