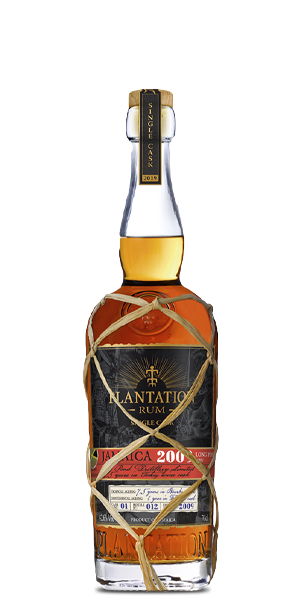 Plantation Rum is owned by French Cognac producer Maison Ferrand, who controls no less than a dozen major brands of premium Spirits and Liqueurs. Ferrand is all about quality — and you can taste it. Plantation Rum is their top-shelf Rum label. And mighty good stuff it is, too. They offer a variety of Rums from the Caribbean. Depending on the specific actual plantation and the country of origin, the Rums can vary between soft and aromatic to light and elegant — each one showing the experienced influence of Maison Ferrand.

The Long Pond Distillery is the most famous distillery in Jamaica. Importantly, their well-aged pot-still Rums are famous for the development of that special aged Rum funky flavor called "hogo" — a Creole version of the French "haut gout". Plantation Jamaica 2009 Long Pond CRV Single Cask 2019 is molasses-based, fermented for one week, and distilled on a Blair column still. It was aged for seven and a half years in Jamaica in Bourbon casks, one year in France using Ferrand Cognac casks, and one and a half years in France in Tokaji Wine casks.

Smartass Corner:
The Tokaj region of Hungary has been growing grapes for Wine-making since the 12th century. A huge network of aging cellar tunnels was carved out of solid rock in the 1400s through 1600s. Tokaj Wines — Tokaji — are sweet White Wines whose vine are infected by "noble rot". The superior flavor is mentioned in the Hungarian national Anthem.

The Flavor Spiral™ shows the most common flavors that you'll taste in Plantation Jamaica 2009 Long Pond Crv Single Cask 2019 and gives you a chance to have a taste of it before actually tasting it.

Finish
The finish is long, lightly sweet, and just a bit spicy.