Founded in 2011
Our/Vodka is a global Vodka made by local people in different cities around the world.

It started in Stockholm, Sweden by six entrepreneurs in 2011 with an idea of creating a global brand with local roots. After working on it for 2 years off-hours from their homes, Our/Vodka received sponsorship from Pernod Ricard and launched Our/Berlin followed by their first micro-distillery. It soon proved to be a success and the brand was born.

Our/Vodka is partly distilled, blended in small batches, and hand-bottled at micro-distilleries in Berlin, Detroit, London, Amsterdam, Los Angeles, and New York, with Miami waiting in the wings. Each distillery follows the same recipe using locally sourced ingredients which give each Our/Vodka its own distinctive flavor profile.

Our/Vodka believe in local power and supporting the neigbourhood. So they partner up with local people creative scene who love their city and have their own take on Our/Vodka by giving it the city's personality and expression. Although this whole 'black-ops' project is backed by the giant Absolut, Our/Vodka is a subversive and innovative twist in the craft Spirits industry.

The Flavor Spiral™ shows the most common flavours that you'll taste in Our/Vodka vodka and gives you a chance to have a taste of it before actually tasting it. 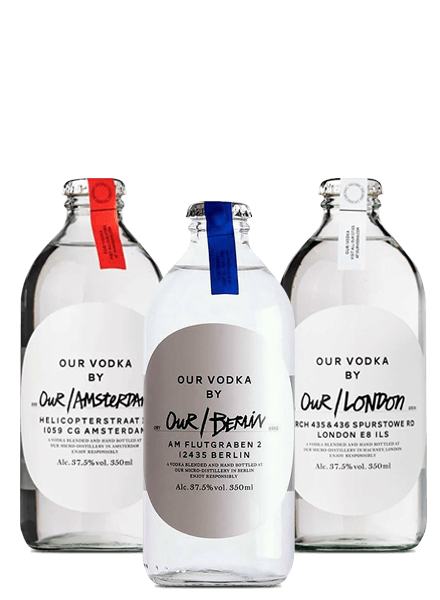