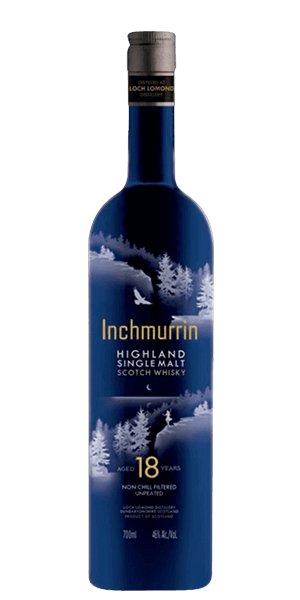 Buyer Protection
Money-back guarantee if things go wrong.
Strong, but not ridiculous; smooth, but prominent; and filled with character without becoming flamboyant.

The Loch Lomond Distillery near Glasgow is famous for craftsmanship, low-volume production, and their unique distillation process. Inchmurrin is made there and it’s their top of the line product. You can buy Loch Lomond branded single malt Whisky, and you should because they do a smashing good job at it. So why create a separate branded single malt?

All we know is that it works. Inchmurrin is actually the name of a lovely island in the middle of the famous Loch Lomond—it’s verdant green rises up in the middle of the misty lake like Avalon. And maybe that’s the point. Inchmurrin-branded Whisky rises above their already great core line-up. It’s just a bit older, finer, rarer, and just plain delicious.

At at time when most production shops are falling back on non age statement (NAS) releases to keep up with demand, Inchmurrin 18 Year Old steps up and proudly shows that luxurious 18 right up front. And they should be proud. With global demand outstripping global capacity, it is hugely tempting—and profitable—to open up those casks a wee bit early and leave the age off the label to comply with the law.

Inchmurrin 18 Year Old Whisky is bottled at 46% ABV (perfection) and is never chill filtered, nor are there any artificial anythings in it. As they say, it’s the way nature intended Whisky to be. Inchmurrin is lightly peated, but the smoke is like a dash of sea-salt on caramels—it enhances the pleasure without punching you in the face. Inchmurrin 18 Year Old is strong, but not ridiculous; smooth, but prominent; and filled with character without becoming flamboyant.

SmartAss Corner
Loch Lomond Distillery has six special stills: three for wash and three for spirit, and all of them are “Lomond” stills. No one else uses them. Most stills are tapered at the top, but these are long, straight cylinders with “spirit trays” inside. This improves contact with cool alcohols and allows them to dial in a VERY precise flavour profile and proof—up to 85% ABV!

The Flavor Spiral™ shows the most common flavors that you'll taste in Inchmurrin 18 Year Old and gives you a chance to have a taste of it before actually tasting it.