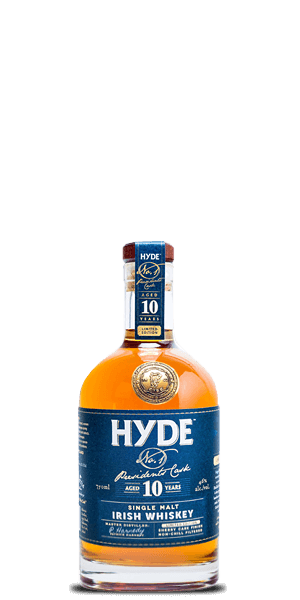 An Irish Whiskey worthy of presidents and kings.

Hibernia Distillers is fairly new, being founded in 2014 by brothers Conor and Alan Hyde in the wee town of Skibbereen, Ireland. But in a few short years this small-town maker of traditional Single Malt and Single Grain Irish Whiskey is rocking the world with products available in fifteen countries and an early, hard-won reputation for creating amazing, aromatic, award-winning examples of liquid Irish pride.

There are actually two different HYDE 10 Year Presidents Cask Irish Single Malt Whiskies. Both are top notch examples of Irish Whiskey craftsmanship, triple-distilled in Coffey stills, and aged for 10 years in ex-Bourbon casks. The No. 2 is finished in Rum casks. Both are exceptional, but our favorite is HYDE 10 Year Old No. 1 Presidents Cask — which is finished for an additional ten months in first-fill Oloroso Sherry casks and served up at an absolutely PERFECT 46% ABV without chill filtration. This particular Whiskey just took home a rare Double Gold medal and "Best Single Malt Irish Whiskey" award.

Smartass Corner:
The Hyde’s clansman — Douglas Hyde — was the first president of Ireland, serving from 1938 through 1945. Both Hyde "President’s Cask" Whiskeys are named after him.

The Flavor Spiral™ shows the most common flavors that you'll taste in Hyde 10 Year Old No. 1 Presidents Cask and gives you a chance to have a taste of it before actually tasting it.

Flavor / Taste / Palate
Thick and creamy with caramel and apricot.

Chris, May 10, 2020
The best Irish Whiskey. Hands down. It actually has flavor. Its not just burn. It's just a little sweet, but nowhere near a bourbon.

Michael, Apr 24, 2018
The good flavor it has is overpowered by the booze - the flavor profile is thus diminished.

Melissa, Apr 5, 2018
It smelled strong but was very smooth. A good sipping whiskey.