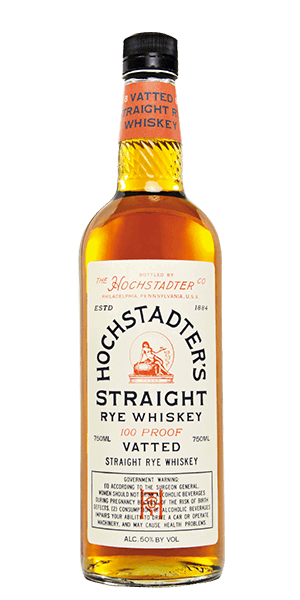 Hochstadter Vatted Straight Rye Whisky … if you don’t NOT click the “BUY” button, there is something wrong with you.

Cooper Spirits founder Robert Cooper rocked the bartending world by making something entirely new. In 2007 they exploded onto the craft distilling scene with their flagship product—St. Germain—an innovative liqueur whose primary component is French elder flower from the Burgundy region. This accomplishment raised Cooper Spirits to become the Wine Enthusiast “Distiller of the Year” just four years later. Cheers to you Rob!

Located in Philadelphia, Cooper Spirits remains the brand manager for St. Germain, having sold production to Barcardi. But Robert Cooper is a third-generation liquor producer and has no intention of stopping now. They have used those funds to curate and launch several new products: Illegal Mezcal, Slow & Low bottled cocktail, Lock Stock & Barrel Rye Whiskey, Hochstadter’s Straight Rye, and their newest product, Creme Yvette, which is a re-introduction of a liqueur first marketed by Rob’s grandfather decades ago.

Once Robert Cooper sets his mind to crafting a spirit, he cuts no corners, and Hochstadter Vatted Straight Rye Whisky is a great example. If you are a Rye fan, this just may be “the one.” First, this is bottled at 100 proof—nearly cask-strength—from a blend of premium Rye spirits sourced from Canada and the Mid-west. Then, not only is this glistening amber gem NOT chill filtered, it ain’t filtered at all. Ever see that before? Didn’t think so.

Only then is it aged for… brace yourself… fourteen to fifteen years in oak before being vatted. A “vatted” blend is where the various barrels and production runs are not just proportionately squirted into bottles, they are all placed in a large wooden vat and allowed to marry—becoming cohesive over time. If you haven’t clicked the “BUY” button yet, there is something wrong with you.

Unlce Flaviar has just commissioned a bronze statue of Robert Cooper to be placed in the Flaviar lobby.

The Flavor Spiral™ shows the most common flavors that you'll taste in Hochstadter's Vatted Straight Rye Whiskey and gives you a chance to have a taste of it before actually tasting it.

Joe, Oct 10, 2019
This is my favorite rye. It is super smooth and has a nice caramel that lingers on the tongue. Neat or with a few cubes I love it.

Michael, Sep 1, 2018
Highly aromatic on the nose with notes of honey, spiced apple and cedar with an underlying sting of ethanol. Sweet up front on tasting, with molasses and dark fruits being the predominant flavours. Further into the palate spicy tones come on strong (cinnamon, cloves.) The finish is dry wth the spices lingering along with rye bread and cedar wood. A fine sip near, this oss also makes an amazing Old Fashioned, with the sweetness coming to the fore and marrying well wth the bitters. It also makes a splendid Manhattan.

carl, Aug 16, 2018
It is actually the low and slow rock and rye. One of my favorites ever since I've been drinking whiskeys

Craig, Jun 22, 2018
Very interesting profile with read and elderflower giving it a grassy start and a smooth finish