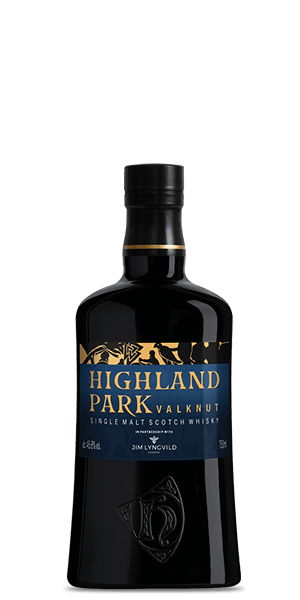 Warrior’s dram under protection of Odin.

Hours north of the center of the Scotch universe, at the edge of the world, there’s the Highland Park distillery, battered by every possible element, standing where Magnus Euson, son of the Vikings, started his Whisky bootlegging empire. More than two hundred years of history and tradition is now bottled in rich expressions of Scotch, revering the Norse mythology. Four craftsmen (a carpenter, a boat builder, a musician, and an artist) make sure the mythical character of the North is captured in the golden Spirit.

Valknut, the second episode of the Highland Park Viking Legend saga, represents an ancient last rite know for the fallen warriors. It’s associated with the Allfather himself and acts as a transition between here and the afterlife. The slick black and blue bottle holds a strong smoky, sweet, and spicy Spirit that was matured in American Sherry-seasoned oak casks.

The Flavor Spiral™ shows the most common flavors that you'll taste in Highland Park Valknut and gives you a chance to have a taste of it before actually tasting it.

Ron, Oct 31, 2020
With highland park you can’t go wrong. The perfect blend of smoke honey and sweet it just rolls down the pallet and one wants more. The Orkney distillery knows what we like.

William, Sep 25, 2020
Perfectly fine drink. Has quite a burn which makes it nice drink to share with friends who perhaps aren't as experienced... Be careful with the pour.

Vincent, Jun 21, 2020
Smoky, but not overbearing. Sweet and salty with hints of vanilla and clove.

guest, Mar 29, 2020
I found this really interesting and complex. Nose has a salty, brine scent with some sweetness, like salt water taffy. On the palate it was initially smoky, then the sweetness and salt came back through. Finish had a little spice, maybe ginger or clove. Adding water brought out a little more dry sherry.