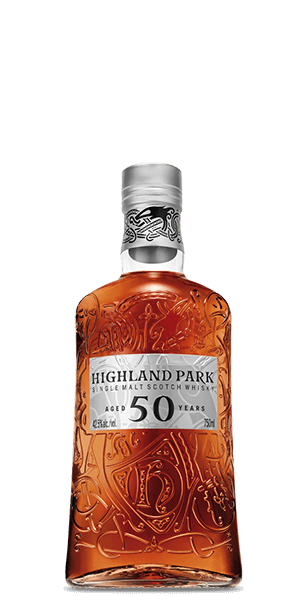 Half a century old nectar from the North.

Hours north of the center of the Scotch universe, at the edge of the world, there’s the Highland Park distillery, battered by every possible element, standing where Magnus Euson, son of the Vikings, started his Whisky bootlegging empire. More than two hundred years of history and tradition is now bottled in rich expressions of Scotch, revering the Norse mythology. Four craftsmen (a carpenter, a boat builder, a musician, and an artist) make sure the mythical character of the North is captured in the golden Spirit.

Now, behold this outstanding rarity, a ridiculously limited release (only 274 bottles) that was put to rest in 1964, which is basically a different dimension now. The Highland Park team discovered two Sherry-seasoned Spanish oak hogshead casks in 2008, snuggly tucked away in one of their warehouses. They tasted the contents and realized they found a real treasure.

After half a century, they married the Spirits and left them united for another eight years. The sumptuous liquid is presented in an elegant embossed bottle and a lovely oak box, both designed by Scottish craftsmen. The Whisky is precious and its natural ruby color hides sweet and fruity flavors with some signature peat smoke. This is the most extravagant king of the North.

The Flavor Spiral™ shows the most common flavors that you'll taste in Highland Park 50 Year Old and gives you a chance to have a taste of it before actually tasting it.

Finish
Long finish with a hint of the signature light peat smoke.

Adam, May 19, 2019
Lucky enough to have a taste. Smoky sweet and a hint of cherry. Respect your elders gents!