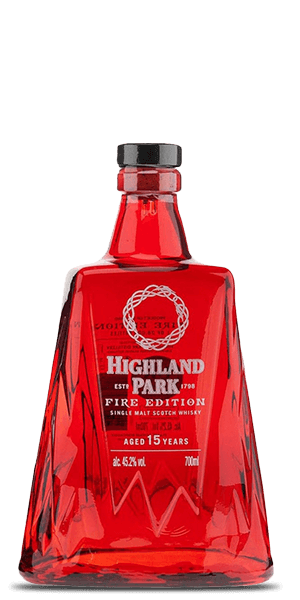 A delicious, heavily Port-influenced Single Malt from Highland Park for the first time.

Highland Park 15 Year Old Fire Edition completes a two-part special edition called “Fire and Ice.” It draws its inspiration from ancient Norse apocalyptic mythology. This — the Fire edition — is classic Highland Park Single Malt aged fifteen years exclusively in ex-Port casks. It’s the first time that Highland Park has used Port wood and it not only influences the flavor profile, but lends the Whisky a distinctive garnet under-hue that glistens fire-like in the glass. Additionally, the distillery commissioned special bright red glass decanters for the special edition that are simply striking. Like many other special edition Whiskies from Highland Park, production is strictly limited to 28,000 bottles.

The Flavor Spiral™ shows the most common flavors that you'll taste in Highland Park 15 Year Old Fire Edition and gives you a chance to have a taste of it before actually tasting it.

Nose / Aroma / Smell
It’s very fragrant with loads of vanilla, mixed fruit juices, and cinnamon over a light note of chocolate in the background.

Flavor / Taste / Palate
Delicate and delicious, the influence of the Port Wine casks is clear with notes of ripe plum, currants, and blackberry over toffee cream, cinnamon, and peat.

Finish
The finish is lingering and balanced with a memory of sweetness and smoke.

Warren, Mar 6, 2019
Really good, a little more smoky than I was expecting. Very strong berry flavor on the finish.