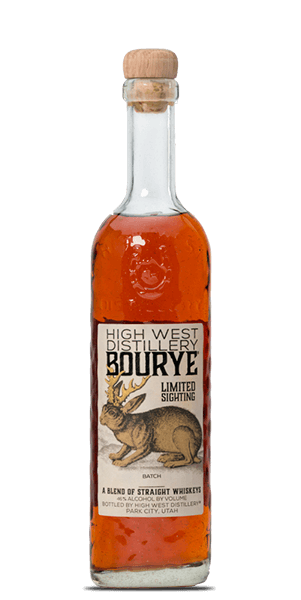 You don't experiment enough until you need an entirely new name for your creation.

A fateful tour of Makers Mark Distillery in 2009 inspired David Perkins and his wife Jane to start their own operation. David — a former biochemist — basically said, “Hey, I can do that!” and moved his family to Utah and set up shop. Success has come hard and fast, and they now produce and market a range of products including their four core Whiskies, three current limited releases, two bottled cocktails, and two specialty spirits.

“Bourye” is a combination of the words Bourbon and Rye. High West Bourye Whiskey is harder to define. They’ve been making this concoction since 2015 and each year the configuration is a bit different. But we can say that this year’s edition is a proprietary blend of three Bourbons and two Ryes — all sourced from MGP in Indiana — ranging in age from eleven to fourteen years. The exact ratio is considered a state secret, but the result is an extremely tasty spirit bottled at a perfect 46% ABV. We also know that judges LOVE the stuff — consistently rating this blended dram above 90 points.

The Flavor Spiral™ shows the most common flavors that you'll taste in High West Bourye Whiskey and gives you a chance to have a taste of it before actually tasting it.

Nose / Aroma / Smell
Honestly, the aroma is like warm pancakes with melted butter.

Flavor / Taste / Palate
With five core spirits, the palate is complex with raw pecan, cracker jacks, plenty of rye spice, and a dash of clove.

Finish
The finish is medium-length with sweet baking spices.

Josh, Dec 7, 2020
This is one of my favorite whiskies. I love everything High West, but this is consistently my favorite.

Emily, Oct 26, 2020
This is one of my favorite ryes to sip on in the fall and winter. Wonderful flavors.

Mel, May 15, 2020
This is simply excellent and balanced; a perfect example of what other distilleries should be striving to achieve.

Chris, May 10, 2020
Starts as bourbon and finishes like rye. Its a great whiskey!

Aaron, Apr 24, 2020
I have to be honest I don't understand the hype on this bottle. I think it's overpriced for what it is and overall just not that pleasant. The nose is pretty rich but one note. The palette is complex but confused, definitely leaning more towards a rye than a bourbon but not really doing either justice. The mouthfeel and finish is where I think the wheels fall off the bus. The mouthfeel is very light and frankly astringent. I would be disappointed if this bottle cost half what it does. Maybe I'm just not the targeted audience but it's a hard pass for me.

Joe, Feb 7, 2020
Surprisingly smooth! Has the nose of a rye, but no burn. Think mouthfeel, silky and long finish. Sweet and oaky on the front, molasses on the end. A bit expensive but a great find.

Liz, Jul 4, 2019
This is delicious. You can nose the clove and definitely get the pecan notes when tasting. Totally worth the price.

Lee, Feb 15, 2019
Without a doubt my favorite - I love surprising friends with how beautiful this is. I always keep a bottle on hand.

Christina, Dec 20, 2018
A really interesting and above average drink. I had my first glass of this at the distillery in Park City. It initially struck me as quite unique and delicious.