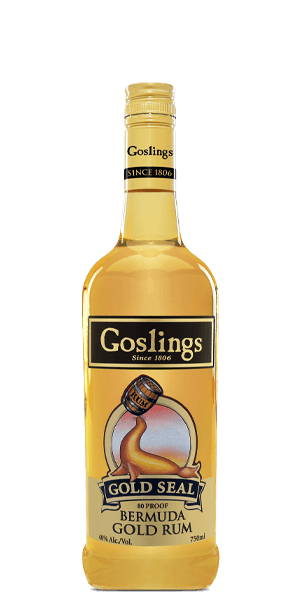 In 1806, James Gosling set out from England with an inventory of goods bound for America to sell. Delays ensued in route and the ship’s charter (a license to sail and conduct business) expired, so the ship docked at Bermuda to sort out the paperwork. By the time the ship was ready to continue its voyage to America, James had decided to remain. He opened up the famous Goslings storefront that remains to this day. And since his father was a Wine and Spirits merchant back home, embarking on a new venture of producing quality Rum was a natural next step. Today, Goslings Bermuda Rums are famous around the world.

Goslings Gold Seal Rum was first released in 2016 — at the time it was the first new Rum from Goslings in more than one hundred years. It is blend of Rums from both pot-still and continuous column stills. And while there is no official age statement, the majority of the Spirits was aged for five years in once-used white oak casks. This yields a strong, refined, and smooth amber Rum that sings in cocktails and charms as a sipper in the glass all by itself.

Smartass Corner:
The famous image of the seal on Goslings Rums is a play on words. Originally, James Gosling would keep the Rum in casks. People would bring bottles to be filled. After each filling, James would dip the necks in black sealing wax. Thus, their first product was called "Black Seal" Rum.

The Flavor Spiral™ shows the most common flavors that you'll taste in Goslings Gold Seal Rum and gives you a chance to have a taste of it before actually tasting it.

Nose / Aroma / Smell
The fragrance has an intense butterscotch note with plenty of exotic florals.

Finish
The finish is a bit dry, smooth, and warming.