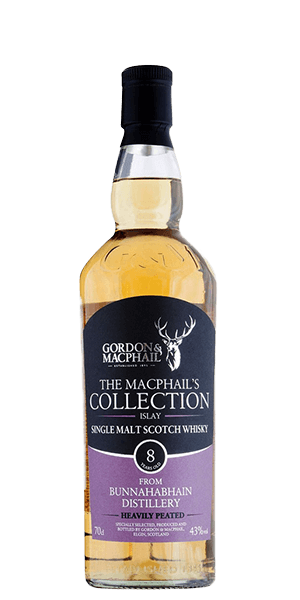 A mouthful name that stands for a mouthful of exaltation.

Bunnahabhain (pronounced the same way Ewan McGregor would say Guten Tag), which of course means "mouth of the river" in Gaelic, found its home on the remote briny coast of the remote Scottish island of Islay. It’s the most northern distillery, which should be enough for them to be knighted the King of the North (of Islay). The distillery was founded by William Robertson and the Greenlees Brothers in 1881. After a few difficulties that included the gale blowing two perfectly good boilers into the ocean, the first bottle of Scotch was filled in 1883.

Unfortunately, the distillery was closed in the year when E.T. came out, but they reopened it in 2002 with new plans and a twinkle in their eye. What’s their secret? Their source of water, which is the cool spring in the Margadale hills. When you taste their Whiskies, it’s like being on a boat: the smell of the sea and a whiff of peat smoke. Don’t tell a soul or this is not a secret any longer.

To experience all that jazz, one needs to taste the 8 year single malt. It’s like sitting by the fireplace in a stone cottage battered by a storm (the cottage is battered, not the fireplace, god forbid). Now this bad boy should be enjoyed either around Christmas for its smoky ember taste or maybe in the early evenings, but you are a goddamn grown-up and you can revel in this creamy dessert of chocolatey-tobaccoesque savor any time you please. This single malt Scotch is watered down to 43% and it's on the brink of being a handful. It teases us by putting one foot over the ledge, but it holds tight and tastes amazing doing it. Compared to its Islay compatriots, it's in a group of more gentle Whiskies. It's like Don Draper to a Tony Soprano; it won't punch you, but you can tell it's complex and flavorful.

The Flavor Spiral™ shows the most common flavors that you'll taste in Gordon & MacPhail Bunnahabhain 8 Year Old and gives you a chance to have a taste of it before actually tasting it.