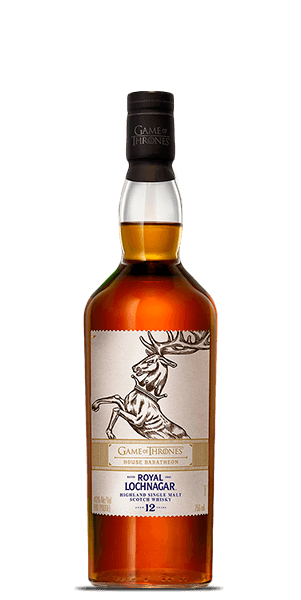 House Baratheon: Ours is the savory.

This rampant stag-adorned bottle of golden delight coming from the Highlands and celebrating House Baratheon is a rich and oaky Spirit worthy of a royal family. While Robert Baratheon would probably go on a bender with it, Royal Lochnagar was granted a Royal Warrant back in 1848 when Queen Victoria and Prince Albert visited the distillery. No boar-related stories, but Vicky obviously loved the Scotch. This 12-year-old is a lovely balance of fruits and spices and if you respect the Stag's banner, you'll enjoy it neat.

The Flavor Spiral™ shows the most common flavors that you'll taste in Game of Thrones House Baratheon Royal Lochnagar 12 Year Old and gives you a chance to have a taste of it before actually tasting it.

Flavor / Taste / Palate
Wonderful balance of fruits and spices with flavors of creamy vanilla coffee and a hint of nutmeg.

Evan, Dec 24, 2020
Very good and can be harder to find than some other variants

Richard, Aug 2, 2020
The nose is incredible. This is one of the best highland Scotches I’ve had.

Duane, Oct 8, 2019
My first Lochnagar. Woody oak nose with a hint of anise. More oak on the pallet followed by caramel and mulling spice. Finished with more oak and a lingering sweetness. Classic Highland Scotch. To be sure, one of the better bottles in the set.

Darryll, Mar 17, 2019
Light and sweet on the nose. Loved it at a very decent price #winterishere

Jasson, Nov 24, 2018
The 5th of the series that I've managed to find. Love it. Light on the nose with some spice and wood, and the taste is extremely lively - fruitiness with some spice. Finish is mild. Sidenote: This is not the whisky Robert Baratheon would've truly enjoyed...but I don't carry a warhammer, so I love it.
Load more reviews