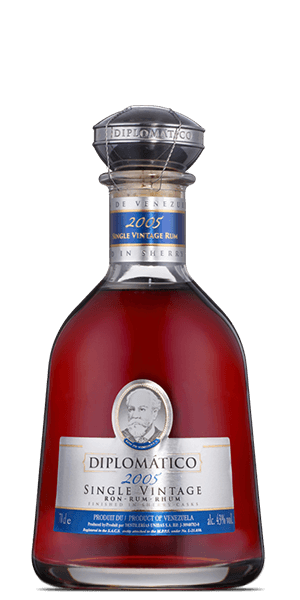 Buyer Protection
Money-back guarantee if things go wrong.
A fully mature and delectable Rum from Venezuela that raises aging and wood selection to an art form.

Diplomatico 2005 Single Vintage Rum is special. The Spirit was distilled in 2005 — every drop in this edition comes from that same vintage. It’s aged for twelve full years in a combination of Bourbon and Single Malt casks. But that’s not enough, because it’s then finished in Oloroso Sherry casks and bottled at 43% ABV. Those specs alone are enough to get the average Rum drinker’s attention. And when we’ve surveyed the reviews and ratings on this lovely Venezuelan dram we have found nothing but universal acclaim. All we can say is that your taste buds will thank us.

The Flavor Spiral™ shows the most common flavors that you'll taste in Diplomatico 2005 Single Vintage Rum and gives you a chance to have a taste of it before actually tasting it.

Nose / Aroma / Smell
The scent is warm and strong with notes of exotic spices, marzipan, vanilla, and light florals.

Finish
The finish is long, warm, satisfying, and rich.

Ashley, Dec 2, 2017
As close to perfection as a rum can get. Soft, notes of caramel and a smooth sherry after taste from the Pedro Ximénez cask .