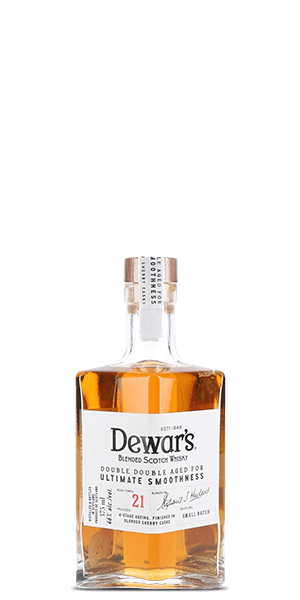 Dewer’s is a legend. The famous brand was founded in 1846 by John Dewer Sr. The brand expanded rapidly under the cooperative leadership of his two sons — John Dewer Jr. and Tommy Dewer. Now owned by Bacardi, Dewers is famous for pioneering the concept of marrying — assembling a blend and then returning it to the cask to homogenize together. The core White Label has a massive on-premiss distribution, making it the most popular blended Scotch Whisky in the US and fifth-largest world wide.

Dewer’s issued a set of three "Double Double" releases. They call their "normal" aging process "Double Aging." This "Double Double" aging was invented by Master Blender Stephanie Macleod and is very time consuming. First the Single Malt and single grain Spirits are aged separately in oak. Then the Single Malts are blended and the single grains are blended together — each aging a bit longer in oak. Then the blended Single Malt is marrying with the blended grains and they are aged together again. Finally, the Whisky is transfer to Oloroso Sherry casks for a final bit of finishing. Dewar’s Double Double 21 Year Old is all of that time and attention applied to components aged a minimum of twenty-one years and bottled at a perfect 46% ABV.

Smartass Corner:
Spirits sales are defined as either on-premiss, off-premiss, or D2C. On-premiss is when the Spirit is sold to a bar or restaurant to be served in individual drinks. Off-premiss is when it is sold at a liquor store of grocer by the bottle to be consumed at home. Direct-to-Consumer (D2C) is when it is shipped directly to the consumer without passing through a store, bar or restaurant.

The Flavor Spiral™ shows the most common flavors that you'll taste in Dewar's Double Double 21 Year Old and gives you a chance to have a taste of it before actually tasting it.

Flavor / Taste / Palate
The mouth-feel has a nice viscosity and a flavor profile of baking spices, hints of black pepper, lemon curd, peaches, vanilla, and a wisp of something smoky.

Finish
As promised, this is a smooth finishing Spirit that seems to melt into your throat.

David, Jan 13, 2021
Love the Scotch. Very smooth and great aftertaste. Does not have the stronger smoke and peat I love, but still a wonderful dram! Nose of fruit and licorice, caramel in the aftertaste, no bite.

Greg, Jan 12, 2021
Decent Scotch, BUT maybe I just didn't pay attention to the details enough this is a small bottle (only 375ml) so about 1/3rd of normal sized bottles. It is a pretty good Scotch but for the price and for this size its not better than most 12 or 15 year olds that can be had for a full bottle at the same price. I mistakenly assumed that because most Dewar bottles are such. Good price that it could be feasible that a full bottle of these could be found at $60 but that's not the case. No pun intended... Sorry to not focus on the flavor profile or Scotch itself, it was just kind-of disappointing the moment I opened the box. Cheers !

Paul, Jan 2, 2021
I’m a fan of an Oloroso matured and / or finished whisky. These casks typically do wonders for spirit. This does not disappoint, not one bit. Definitely a nice smooth spicy note present that develops in the mouth. Over a couple of minutes a fruity note softens and brings balance to the whisky. There’s a pronounced peach note and a beautiful warming spice. Ooomph.

Ryan, Dec 29, 2020
A good bourbon is my drink of choice; however, this scotch was outstanding! Complex flavor and still some sweetness.

Kyle, Dec 9, 2020
I enjoyed the flavor profile here. Great dark fruit and dry sherry influence. If you like something with a little more wood influence, this one is for you

Matthew, Dec 4, 2020
Bought this on a whim as the price was very good, and I must say it was very enjoyable and largely comparable to many younger entry level sherry cask single malts. As a blend at 21 years old this was highly enjoyable at a reasonable price for the age statement. Great sherry taste and it was very smooth and I really liked the mild spicy finish at the back. I will want another one of these.
Load more reviews