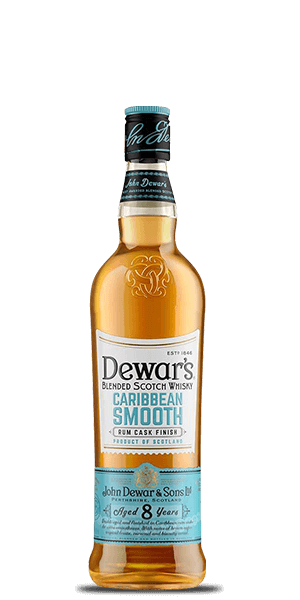 Dewar’s 8 Year Old Caribbean Rum Cask Finish is a delight. Just like its sister dram in the "Smooth Blended" series, Dewar’s call this Scotch double-aged — and eight years ain’t shabby at all. But then they finish it in ex-Rum casks for up to six months. And it is this little finishing that makes all the magic here. Ultimately, this is the reason why you experiment. Who would have thought how complimentary the Rum influence would be on the core Dewar’s profile. The notes of exotic fruit and spice changes the mouth feel and complexity in all the right places for an exceptional value.

The Flavor Spiral™ shows the most common flavors that you'll taste in Dewar's 8 Year Old Caribbean Rum Cask Finish and gives you a chance to have a taste of it before actually tasting it.

Nose / Aroma / Smell
The influence of the Rum casks arrives quickly on the nose with nice fruit notes, espresso, and Asian spices.

Flavor / Taste / Palate
On the palate you’ll notice a lightly oily mouth-feel with a softness and notes of cherry cordials, toffee, coconut water, and cookie dough.

Finish
The finish is medium length with creamy butterscotch.

Jim, Nov 25, 2020
I can taste the sugar cane at the end of sip. Very smooth scotch with oak and smoke favor and aroma.

Josh, Nov 2, 2020
I was utterly disappointed with this one. I'm not a scotch snob in the slightest and actually have only enjoyed a small number that I've tried. This has a disgusting finish and aftertaste. I tried it neat, on ice, and with some soda water. Couldn't stand it regardless how I tried and will never buy it again. AVOID.

Jason, Aug 10, 2020
Surprisingly smooth with a hint of sweet and spice.

James, Jul 22, 2020
Little different taste but the finish is worth the wait. Great sipping scotch that will be on my bar.

Rusty, Jul 10, 2020
The rum cask finish is a great touch and for the price you can keep it stocked.

Elvis, May 20, 2020
This was a solid mix with ginger ale. For that price point, you can't go wrong.
Load more reviews