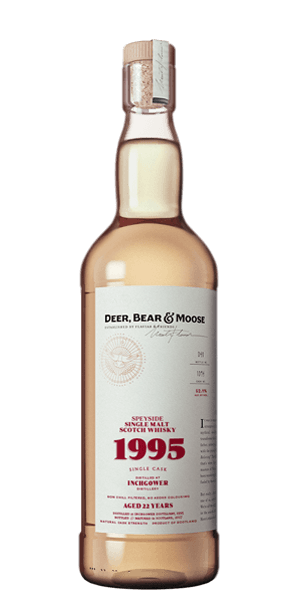 Originally known as Tochieneal, before being moved and renamed, rescued and preserved, Inchgower became more than just a distillery–it became an idea with such strength and conviction to inspire an actual poem.

Inchgower takes pride in its unbending commitment to what a Single Malt Whisky from Scotland should be. This Speyside dram is an essential component of several famous blends–Bell’s and Johnnie Walker to name a couple–but it’s their crème de la crème 22 year old Single Malt that enthralled our Deer, Bear & Moose.

This is a deliciously confusing coastal malt where the aromatics, and even the flavor, evolve continually. Constants are overall sweetness which is paired with just a hint of unmistakable salinity. An intense tasting experience and a rollercoaster of fun. The most transcendent DBM choice to date–each sip expanding into a new universe of taste… and you thought you’d never get to be an astronaut!

One giant sip for mankind.

The Flavor Spiral™ shows the most common flavors that you'll taste in Deer, Bear & Moose Inchgower 1995 and gives you a chance to have a taste of it before actually tasting it.

Smell / Nose / Aroma
Crisp, fresh and oh so sweet. Different sweet sensations are playing around just waiting for you to pinpoint them.

Flavor / Taste / Palate
The sweetness becomes evident through vanilla and a bit of chocolate. A bit oaky with some earthy touch to it. Some citruses are also present.

Finish
Convoluted and long lasting finish with a tinge of honey.

Tucker, Feb 26, 2019
This is ridiculously tasty. Soft smoky start quickly fading in to a light honey, oak and oily finish. Really enjoy sipping it. Defintely an "occasion" bottle to save for myself or very close friends.

Justin, Jun 23, 2018
Fantastic. Perfect honey and sweetness with just the right finish. A little expensive, but a wonderful scotch. One to savor for special occasions.

Tim, May 10, 2018
Solid offering but not worth the price. Would have been great for half the price.

Darryl, May 5, 2018
It was a very smooth well priced scotch will buy again

William, May 5, 2018
Not normally a scotch drinker, this was excellent. Smooth, buttery and worth every penny. It may have spoiled me .....

Zeno, Apr 27, 2018
The very best smell I've ever experienced. It smells like a very mature and excellent wine and it tastes like a nice Port Charlotte.

Wesley, Apr 15, 2018
Dear Deer, Bear and Moose, Thank you for offering this Inchgower. The flavor spiral is exactly what my tasting experience was. I had no idea a scotch could be this sweet. The selfish part of me wants to give it a one star in hopes of steering everyone else away thus leaving more for myself. But, I think it’s too late for that. Please offer more like this.

Tamalya, Apr 5, 2018
I've never been a scotch drinker. But one taste of this has changed my mind about a good scotch. A slight woody note. Not overpowering at all.