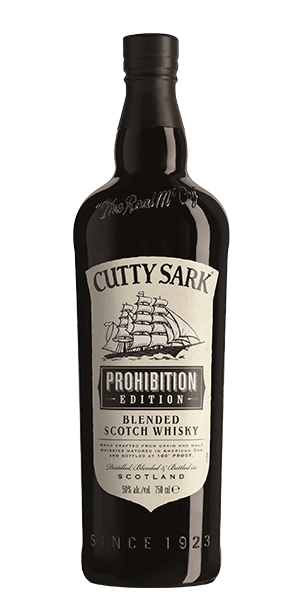 Cutty Sark has been around a long time… since 1923. But they are a Whisky produced by The Edrington Group, which as been around in various forms since 1850 and is owned by the Robertson family. Why do you care? Because they make a LOT of Whisky, including perennial Single-malt favorite The Macallan, The Famous Grouse, and Highland Park for goodness sake! They also own Brugal, which is the leading golden Rum in the Caribbean and Snow Leopard Vodka. The Edrington Group are not one of the super-giant-behemoths, but there is some serious skill in their bottles.

Cutty Sark produces a wide range of blended Whiskies that have formed the core of back-bars for decades. The Whisky gets its name from the ship — The Cutty Sark — which was one of the last and fastest sailing cargo ships ever made. And it was built just a few miles from the distillery about the time the Robertson's started distilling near Glasgow, Scotland. The ship, in turn, was named after… ahem… a scantily-clad character in Robert Burn’s famous poem, "Tam ‘o Shanter." In fact, "cutty-sark" roughly translates to "short skirt" in the local vernacular.  Hot chicks, fast ships, and Whisky… some things never change. A carving of the fetching and bewitching lass was carved into the bow of the ship.

Cutty Sark Prohibition is dedicated to the "notorious Captain William McCoy" who smuggled Cutty Sark into America during the dark days of Prohibition. So for this special edition bottling of their core blended Scotch Whisky, they pulled out all the stops.

The bottle is rich black glass, the label old-school, and the Spirit is bottled at 50% ABV like it was back in the 1920s. The normal Cutty Sark is 40% ABV, so Cutty Sark Prohibition makes that other stuff look like a schoolboy. And all Cutty Sarks are "blended Scotch" Whiskies, which means that they balance it out with other grains to ensure a consistent flavor profile. At nearly cask-strength, it has flavor to spare.

SmartAss Corner:
In the film Goodfellas, Joe Pesci’s character — Tommy De Vito — orders a "Cutty and water." It was one of the most popular drinks among mobsters during their heyday.

The Flavor Spiral™ shows the most common flavors that you'll taste in Cutty Sark Prohibition and gives you a chance to have a taste of it before actually tasting it.

Jakub, Feb 21, 2021
Very spicy, pepper and citrus. But I like it quite a lot. Will probably buy again

Tom, Nov 25, 2020
This has become one of my favorites as I cultivate a pallet for Scotch. I love the "bite" of pepper! A great sipping Scotch for these cold winter nites. On to my second/third bottle!

Paul, Nov 8, 2020
I tried this early in my Whisky journey when my palate was not well developed due to my inexperience. I remember that I wasn't overly impressed then, but at the time I thought Dewars White Label was the bomb. I'm going to have to give this another go to see what I would think now. After all 100 proof blended Scotch is not that common and at this price point what do I have to lose? More later....

Heather, May 27, 2020
Way too peppery without ice or water, I actively disliked it at first. However, it's great to sip slowly with generous ice--let it melt! Still don't like the spicy nose, would not order again.

Thomas, Apr 24, 2020
Very hot without ice or water to mellow this down. Not a favorite but for a daily driver it could be ok.

Justin, Apr 19, 2019
Wow. Amazing for the price. I put it at an 8 in comparison to my favorites (Lagavulin 16 and Ardbeg Uigaedail), but it's less than half the price. Hard to find anything under $40 that is even comparable.

Jasson, Feb 27, 2019
Delicious and remarkably smooth for it's ABV. I was not expecting this to be as great as it is. Highly recommended.

Daniel, Feb 14, 2019
Smoother than the 50%ABV would seem. I would recommend as a blend that rewards with complexity and grain notes

Burton, Dec 31, 2018
On the nose i get honey, caramel and some malt aroma. The palate is mollasses, plums and pepper. Really approachable for 50% APV. This is great for the price.

Todd, Dec 27, 2018
Definitely a weirder one.. A good candidate for some added water. Very spicy.

Leslie, Dec 23, 2018
Scotch has has a harsh burn, with a funky after taste. Very potent body, that is very off-putting.

Edward, Dec 22, 2018
Very strong with a hard bite. Needed to water this one down a little and even then, just not to my taste.

Mason, Dec 14, 2017
Peppery with hints of vanilla, could have more refined flavors and a smoother finish.
Load more reviews