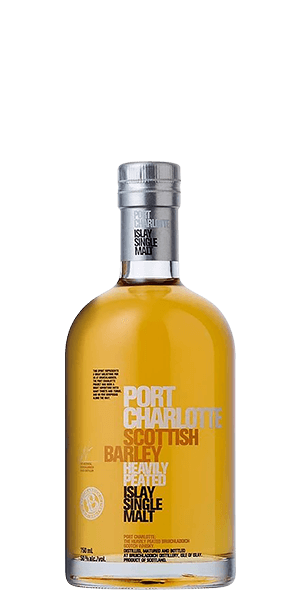 Part of their heavily peated range, Bruichladdich’s Port Charlotte is a journey through its Islay home and Scottish heritage. The peat is cranked up to 40PPM and is perfect for all you smoke lovers out there. This expression takes the usual floral notes that are characteristic of Bruichladdich and intertwines them magnificently with a strong heft of peat. It also throws in some sea air for good measure, capturing the roving waves around its coastal birthplace.

The Flavor Spiral™ shows the most common flavors that you'll taste in Bruichladdich Port Charlotte Scottish Barley and gives you a chance to have a taste of it before actually tasting it.

Smell / Nose / Aroma
Smoke from the get go, with undertones of vanilla and toffee.

Flavor / Taste / Palate
Warming smoke with notes of caramel and a smooth nuttiness peaking through, the malty barley flavor also makes an appearance.

Finish
A good dose of peat that lingers amongst vanilla and thick oak and barley hints as well.

Anthony, Jul 3, 2019
Sip it neat very nice peat with some smoke a good scotch. Will buy it again!

Alex, May 24, 2019
The Port Charlotte project is a great success!! Incredibly Smokey and the heavily peated’s incredible! It’s enough to stick with you and follow through as you sip, but it’s not overpowering in a way that turns off a lot of people who avoid peated whisky. A new favorite!!

Robert, Apr 12, 2019
Peat and smoke on the nose, not much of any smoke on the palate, the peat is there but still pretty soft all in all. Still prefer a Laphroaig 10 over this but was fun to try out.

Alex, Jan 21, 2019
One of my go-to scotches. It's pretty affordable, and can hang in there with the standard islay scotches.

Dave, Dec 15, 2018
Surprisingly good. Not as heavily peated as the name suggests...but that's a good thing. Very well balanced with both sweet and smokey. Will definitely buy again.

Jenni, Sep 20, 2018
Such a nice note, pleasant with floral sweet aroma. Tastes as good as the aroma and finishing with smoke and peat. Wonderful!

Michael, Sep 14, 2018
Just had a tasting here at home with friends. We tasted Dalmore (12 year), Aberlour (12 year), & the Port Charlotte Heavily Peated (that I'd not had for a few months). The Aberlour was loved by all, but the Port Charlotte was the best surprise once again. It will still be my favorite to return to after questing with others.

David, Aug 11, 2018
Overwhelming peaty smokiness, both on the nose and on the finish. Doesn't linger too long. I really like this scotch.

guest, Jul 1, 2018
Used to work for Wilson’s fuels and stayed at lochindall hotel when over there in Islay bruichladdich or “bricladie “ as prounced locally was great , great people and great product guys

Christine, Mar 18, 2018
Love the smoke. Higher ABV than I'm used to, so I did add a few drops of water and was then able to enjoy the flavor more. The oak and peat was a nice combination.

Eduardo, Mar 1, 2018
Pepper, smoked bacon, tobacco and some vanilla at the nose. In mouth warm with caramel notes and medium long finish.

Jack, Jan 15, 2018
I hated it on my first drink. But I bought the bottle and kept drinking it and now love it. First time you might need to water it down. I just add ice and and enjoy the strong flavor as it changes with the melting ice.

Jonathan, Jan 11, 2018
I finally had opportunity to try it this week at a lounge and it seemed like it had a lot of flavor going on but the antiseptic listerine mouthwash taste stood out too much for me. I had my colleague take a sip and he too said, listerine and didn’t like it. I don’t know, perhaps it’s suppose to taste like that but was just not for me.

Pierce, Dec 13, 2017
This is perhaps my favorite Islay of all time, good balance of smoke and peat, and for the price it simply can't be beat.

Johann, Nov 10, 2017
Almost as perfect (for me, anyways) as the Laphroaig 25y – with the added benefit of a price that won’t ruin me. Very smokey, not too much peat (compared to others), and generally a pleasure to enjoy.

guest, Mar 14, 2017
This is one of my favourite Islay single malts. It is very peaty with hint of smoke and citrus.