Distillery
Founded in 2010
Breuckelen Distilling was launched in 2010 by Master Distiller Brad Estabrook, a former banker with a desire to start his own business.

Inspired by the growing craft distilling movement and his local surroundings of Brooklyn, NY, Estabrook took the leap and bought the 2,500 square foot premises where the distillery rests today. Despite a small legal battle with Brooklyn Gin over the similar sounding name (which now seems to have been resolved), the launch was a success.

Breuckelen produces Gin and Whisky and takes a grain-to-glass approach, which means the entire process to make their products is done on site – from milling the grain, to creating a mash, to fermenting, distilling, maturing, bottling and labelling. The current product line-up includes Glorious Gin, an oak-aged version, and a number of Whiskeys.

The Flavor Spiral™ shows the most common flavours that you'll taste in Breuckelen Gin. It's based on all Breuckelen drinks in our large database and gives you a chance to taste Breuckelen before actually tasting it.

Dog Dogson's
Smartass Corner
Breuckelen is the name of the former Dutch settlement which we know today as Brooklyn, NY.
Video from Breuckelen
Video transcription
We started Breuckelen Distilling back in July of this year, after about a year and a half of planning and construction to put the place together. I got started into this after I had grown disgruntled of my lousy old job and started thinking, you know, what could I do that would be more satisfying and more rewarding than what I was doing before? I was partly inspired by the other people in Brooklyn, where I was living at the time, who are making different products, really from scratch, and by hand, and independently.

I saw lots of other people making chocolate, or roasting coffee, or making tonic water, you know, making different things where they were starting from the most elemental forms of the different ingredients and combining them and making something that was really special at the same time. It wasn't until I read an article in a magazine saying that some laws related to distilling had changed. Now was the easiest time since prohibition, basically, to start a small distillery.

I didn't know if I could start a distillery at that point on my own or not, but it was the obvious thing to try to do. And I thought to myself, you know, "I'm gonna try to do it. And I'm either gonna run into a roadblock at some point that means I can't do it, or it's gonna happen." It was challenging to get people to take me seriously. You know, talking to real estate agents and plumbers, and, you know, I would call them up and say, "Hey, I got laid off from my job and I've got a little bit of money and I'm trying to start a distillery in New York City." And most of these people would look at me or talk to me like I was crazy because there were no distilleries in New York City and no one had ever, you know, rented a space for a distillery, or plumbed a distillery, or put in the electrical for one. And these people, I think they saw me in an empty room and they just weren't taking me seriously.

I started drinking lots of different Spirits to really try to get an appreciation for what the different types are all about. I mean, I'd always drank Spirits, but I wasn't really as focused on the nuances. And I still remember the first time I had drank, like, it was a Scotch Whisky or something like that, that I was actually paying attention to what was going on. And I thought, "Wow, this is amazing because there's so much sophistication in a Scotch Whisky like this." I was blown away. I had never had Spirits that were that dynamic and that bright. So then I knew that this type of idea would be great if we could make something that's that sophisticated.

One of the reasons that we liked Gin and liked to pick Gin as the first product to make was because the legal definition of Gin is wide open. And we thought we had a lot of room for flexibility. You know, one of the things that makes a Gin unique is the botanicals that the distillery uses, how they distill those botanicals. And so we came up with a recipe of botanicals just from paying attention to different flavors that we had in foods and drinks. And we chose to work with, obviously, juniper, that's the one thing you're required to use for Gin. And then we also use rosemary, lemon, ginger, and grapefruit as the complementing botanicals.

One of the moments that I'll never forget, honestly, was the very first time we had it all set up. We had our permits, we loaded it up for the very first time with wheat mash and started distilling. I remember I was standing, you know, like in a similar area, and all of a sudden in the room, we could smell the aromatics of the wheat Spirit. As the still had heated up, this aromatics had come off the still and filled the area around it, even before the Spirit had dripped off. And I remember thinking, "Wow, it smells amazing and it smells just like I had hoped." That was the first time that I thought, "Wow, this is actually going to work." And sure enough, that first batch that came off, I mean, it tasted exactly like what we had hoped it would taste like.

At that point, yeah, huge amount of the...just the bet that we had made that it would work, or the confidence that we had just...maybe we had it for...ignorance, for no other real rational reason of being so confident that we could do it, but, you know, that's when it sorta solidified itself and we moved from just this crazy idea to actually, "Look, we can make something that tastes great."

My name's Brad Estarbrook, and I'm the founder of the Breuckelen Distilling Company. 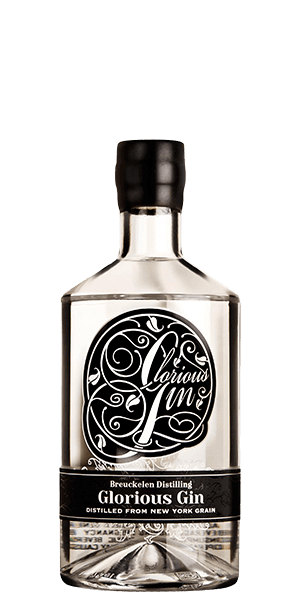