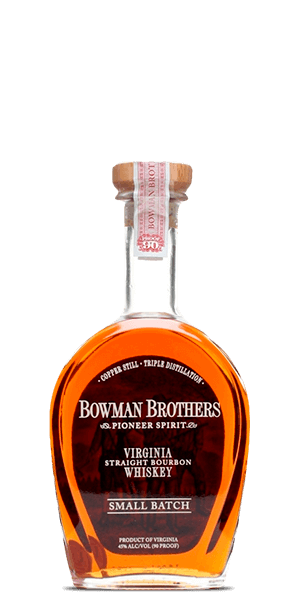 An unsung hero of Bourbon with great mouthfeel and spot-on flavor profile.

The A. Smith Bowman Distillery was founded by Abram Smith Bowman the day after Prohibition ended in 1934. It has been in continuous operation ever since and was the only licensed distillery in Virginia for decades. In 1988 a new distillery was built a few miles away near Fredericksburg, and in 2003 the operation was purchased by New Orleans-based Sazerac. Still specializing in a line of quality Bourbons, the distillery also produces Rum, Vodka, and Gin.

The “big sister” in the Sazerac portfolio is Buffalo Trace Distillery. Bowman Brothers Pioneer Spirit Virginia Straight Bourbon Whiskey follows the lead of their big sister in mash bill and spirit production. That means they are likely using the famous “mash bill #1” — high corn and an ~10% Rye. It’s triple-distilled, aged in new #3-char barrels for six to seven years, and bottled at a robust 45% ABV — yielding a deep maple color and plenty of unique character. And since it’s small batch, there is never enough of it to go around.

Smartass Corner:
Triple distillation is common in high-end Irish Whiskies, but very unique in the world of Bourbon. Most experts agree that it yields a lighter, smoother spirit that extracts more flavor from the wood.

The Flavor Spiral™ shows the most common flavors that you'll taste in Bowman Brothers Small Batch Bourbon and gives you a chance to have a taste of it before actually tasting it.

Flavor / Taste / Palate
The palate is exactly as you would expect — a thick and sightly oily mouthfeel with notes of vanilla, toffee, warm roasted nuts, a dash of gingerbread, and fresh-cut wood.

Finish
The finish is long with a surprising pepper spice that blooms at the end.

MARC, Jun 23, 2019
For the price this is a spectacular whiskey! sweet to the nose and tongue. slight burn at the end with great flavors.

Christina, Dec 20, 2018
A fine regular sipper, but inferior to the John J Bowman single barrel (which I highly recommend as a 8/10, a league way ahead of Bowman Brothers).

Jamie, Nov 17, 2018
One of my favorites all around. Full body and back end oak. Straight up or served over ice is an enjoyable savor.