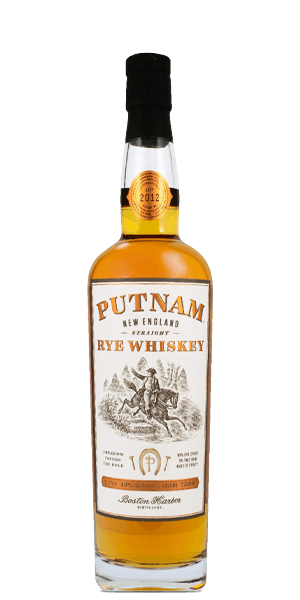 Putnam New England Rye from Boston Harbor Distillery is made from 95% malted rye and 5% malted two-row barley. It’s re-distilled with a center-cut to bring the proof up to 155 (77.5% ABV) and placed in new, deeply-charred 200-liter barrels. It’s brought to a very pleasant 43% ABV with pure water from the local Quabbin Reservoir. As they say at the distillery, "… nothing says America more than Rye."

The Flavor Spiral™ shows the most common flavors that you'll taste in Putnam New England Rye and gives you a chance to have a taste of it before actually tasting it.

Nose / Aroma / Smell
The nose is firm, yet soft with warm toasted oak, fresh rye bread, and herbs — from mint to cilantro — and a bit of sea salt caramel.

Finish
The finish is long with blooming slices all around you.

The Spirits Of Boston
The delicious Whiskeys of Boston Harbor
Whisk(e)y
9/10
$41.99

The Hoppy Spirit Of Boston
When Beer becomes Whiskey
Whisk(e)y
6.7/10

Christopher, Mar 24, 2021
10/10 on taste. First and foremost, let me throw it out there that I am not a huge rye whiskey fan. I prefer bourbon buy do have ryes that I drink on occasion. That being said, this whiskey was very gentle on the palate, with a nice sweetness that balanced the rye notes. I knew it was a rye on my palate, but enjoyed the mouth coating and finish. I have tried all of the Putnam ryes and all of Boston Harbor Distillery's current products as of March 2021. What a wonderful experience and a hidden gem in Boston. My wife also liked this one, and she even noted that there was zero scent or taste of alcohol. It is light (and low abv), but would make a nice "daily sipper" (especially for the rye fans out there).

Jeremy, Mar 10, 2021
I have never sought a rye above another form of whiskey. I enjoyed this. This will be the first rye I intentionally buy.

Brian, Feb 15, 2021
Solid whiskey can taste the sweetness but it’s not overpowering

Amber, Jan 17, 2021
Cardamom, light oak, in the Boston box this was our favorite. I’m a fan of ryes so that might tilt my opinions.

Gregory, Jan 9, 2021
Good taste and nose but just not enough to make it worth the price. Very easy to drink. Probably perfect for people not used to drinking stronger whiskey.

Antti, Oct 22, 2020
It is a very good, intense, Rye Whiskey that has an aromatic birth; while a bold & spicy life leads to a long & thick death.
Load more reviews