Distillery
Founded in 1795
Otard Cognac House is located in Château de Cognac, simply known as Château. The Otard family traces its origins back to the middle of the 9th century to a Norwegian Viking named Ottar.

Otard Cognac House, also known as Château de Cognac, was founded in 1795 when Baron Jean-Baptiste Otard returned to Cognac after a short exile to England.

Upon return, he found the motherload stock of eaux-de-vie that his family has been building up for over 30 years. Cha-ching! The only Royal Chateau of Cognac was bought by Baron Otard for its unique aging conditions.

Situated on the same level as the river Charente, the relative humidity reaches 90%. The walls are 3 meters thick, enabling the temperature to remain constant at 15°C throughout the year.

Baron Otard set a requirement that the distillation should take place immediately after the end of fermentation, guaranteeing better eaux-de-vie.

They distill on the lees, meaning the natural yeast in the Wine is included, which gives the Cognac a subtly different flavor and a distinct bouquet. Now add the unique aging conditions of the Baron Otard Cognacs and you have yourself a splendid Cognac.

The Flavor Spiral™ shows the most common flavours that you'll taste in Baron Otard Cognac. It's based on all Baron Otard drinks in our large database and gives you a chance to taste Baron Otard before actually tasting it.

Dog Dogson's
Smartass Corner
Baron Otard was arrested and sentenced to death in 1793, as his ideas of the monarchy were a tad different from the new authorities.’ Luckily, he was freed by the townsfolk a day before his execution.

Baron Otard was Mayor of Cognac from 1804 until his death in 1824, and Member of Parliament in the last four years of his life.

Chateau de Cognac was also the birthplace of King Francois I of France. 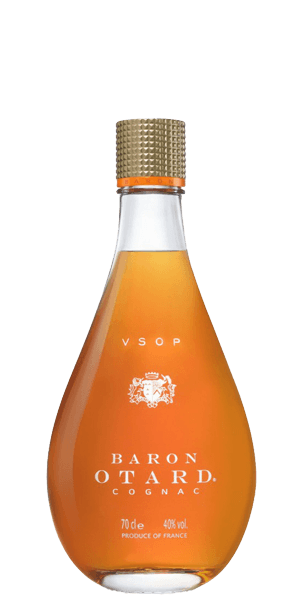