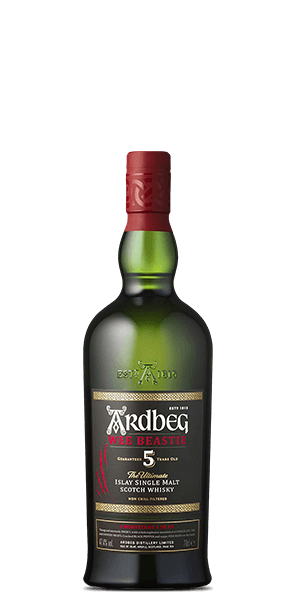 In an age of Whisky start-ups, Ardbeg is refreshing blast from the past. They have been making Malt Whisky on the same site since 1798. The product was so popular that they ramped up production to commercial levels in 1815. That’s more than two-hundred years of Single Malt wonder. Like nearly all of her Islay sisters, Ardbeg is a peated dram. But Ardbeg is known for gentle smoky smoothness with the vast majority of production going into the greatest blended Scotches. But true Single Malt releases are in high demand and they consistently deliver.

We LOVE the name — Ardbeg Wee Beastie. Isn’t that great? This Single Malt is called a little monster. And it lives up to its name. It’s the newest addition to the core Ardbeg line-up and it’s both sharp and smoky. Now, you probably expect an Islay Single Malt to be smoky. But this is a younger dram of five years in the barrel, so the smoke shines even brighter. But you still have all the greatness of the Ardbeg we all know and love at an attractive price point. It’s like finding a Ferrari at half price.

The Flavor Spiral™ shows the most common flavors that you'll taste in Ardbeg 5 Year Old Wee Beastie and gives you a chance to have a taste of it before actually tasting it.

Nose / Aroma / Smell
The aroma is sharp and fresh with distinct notes of vanilla, black pepper, wood sap, and espresso.

Finish
The finish is long and briny with a coating mouth-feel.

John, Jul 22, 2020
I enjoyed this a lot but I am all about Ardbeg whisky. The nose is pure peaty Islay smoked ham steaks . It tastes like Arbdeg 10 but harsher and less refined. Adding some water helps with this. The peat smoke is stronger than any Ardbeg I’ve had. Finish lingers for days. I would buy another bottle only if I could find it cheaper than the 10 year or Laphroaig 10.

James, Jul 3, 2020
The go-for-your-throat peatiness won't be for everybody. If you enjoy a young Islay, this is a great option. Comparing it to similar malts - maybe a Laphroaig QC, or one of the young Signatory Caol Ila bottlings - it comes off favorably, and at a decent price point. An oily feel and buttery finish are nearly overwhelmed by peat and smoke, but what did you expect on a five-year Ardbeg? I'll be keeping a bottle around.

Kevin, Jun 19, 2020
New to tasting want to try something Smokey having like JW black. Too much for me...could get over feeling like I was licking ashes 😬

Andrew, Jun 18, 2020
An excellent whisky that brings a lot of bourbon in the finish (vanilla, toffee, oak). There is a fun bit of dark chocolate that sneaks in as well. But this is smoke from one end to the other. A really nice dram that shows its age briefly, but not in an annoying way. All in all, it holds up nicely with some good complexity. To me, it is like the younger brother of Coreyvreckan.

Alex, Jun 18, 2020
Great price point for some Ardbeg deliciousness. Does not disappoint.

bill, Jun 3, 2020
Smokey with a bite, all the things they said it would be. Not bad at all! I would say it is over priced for a 5 year though

Adam, May 30, 2020
Young, but mature beyond it's years. A slightly lighter body than the 10, but strong notes of dark chocolate, brine and smoke linger well after the last sip. Very nice for the price!

David, May 14, 2020
This is great! Smoky and young. It's only in the barrels for five years so realize you're getting a dram with a bite to it! When you open the bottle, that smokey peaty Islay smell brings you right to the coast. When you sip, the smokiness hits you right away along with the brightness that shines through since it's so young. Afterwards the dark chocolate and pepper spiciness hits you. Realize what you're getting here... This isn't going to be the smoothest, even-tempered dram like some that are aged four times as long as this guy. But if you're looking for something fun and different, or if you're looking for an Islay whiskey worthy of mixing into a cocktail, this is your beast.
Load more reviews