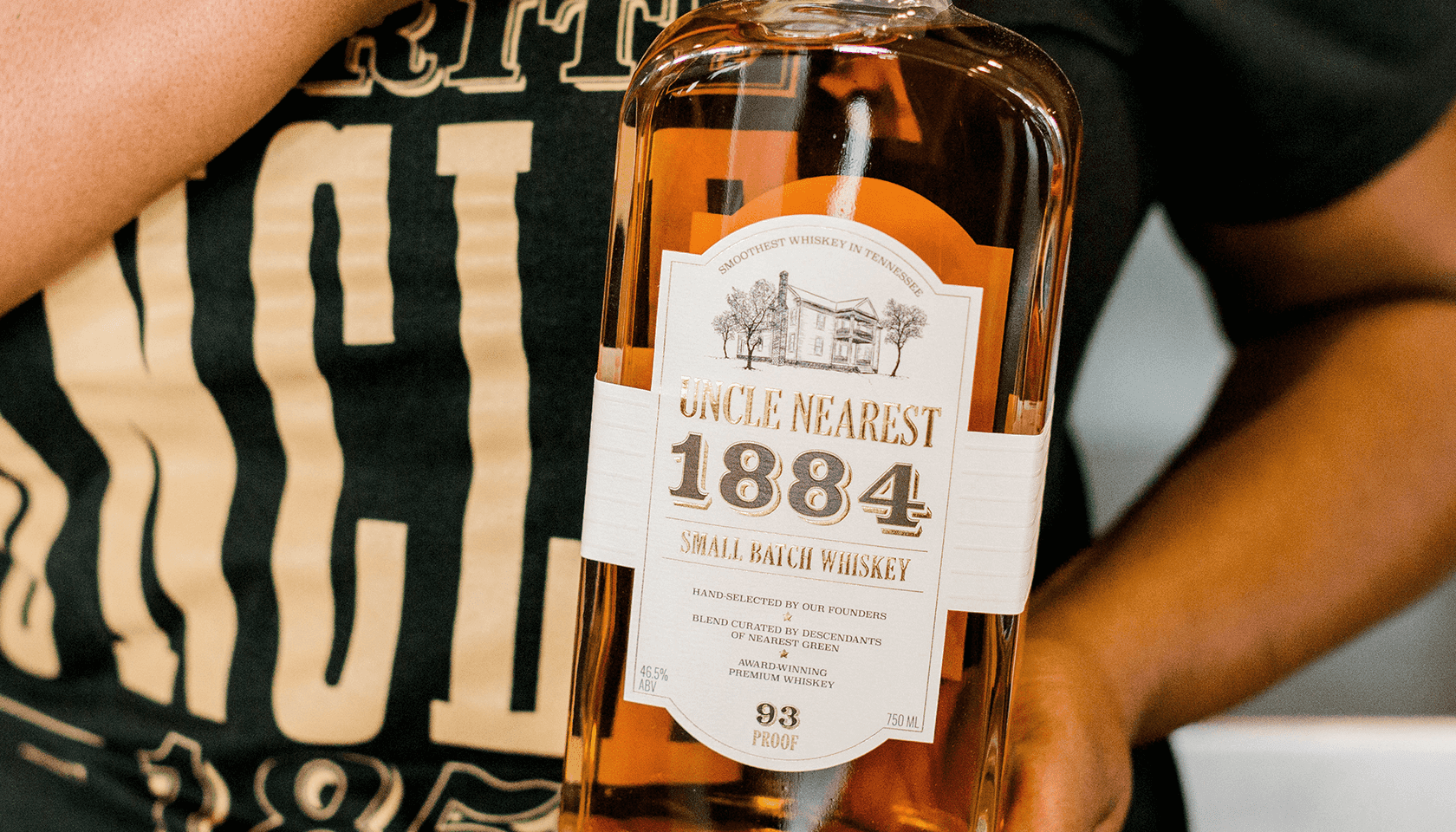 History books don’t always get it right. But in the case of Jack Daniel's, the truth was barely a blip. It took an article in the New York Times, an entrepreneur with an eye for a good story and good ol’ fashioned serendipity to bring the riveting tale of Nearest Green — and his connection to the legendary Jack Daniel — to light.

“If you read Jack Daniel's legacy, which is ‘The Biography of Jack Daniel’, when a young Jack was introduced to Nearest Green by a preacher, the preacher introduces him by saying, ‘this is Uncle Nearest, he's the best Whiskey maker I know of.’”

And it’s Nearest’s back story that caught Weaver’s attention and ultimately led to the creation of one of the hottest new Whiskey brands in the U.S. today. Thirsty for more, we sat down with founder of Uncle Nearest Whiskey Fawn Weaver to talk about Nearest Green’s legacy, the juice they’re producing and the best way to enjoy a glass of Whiskey history. 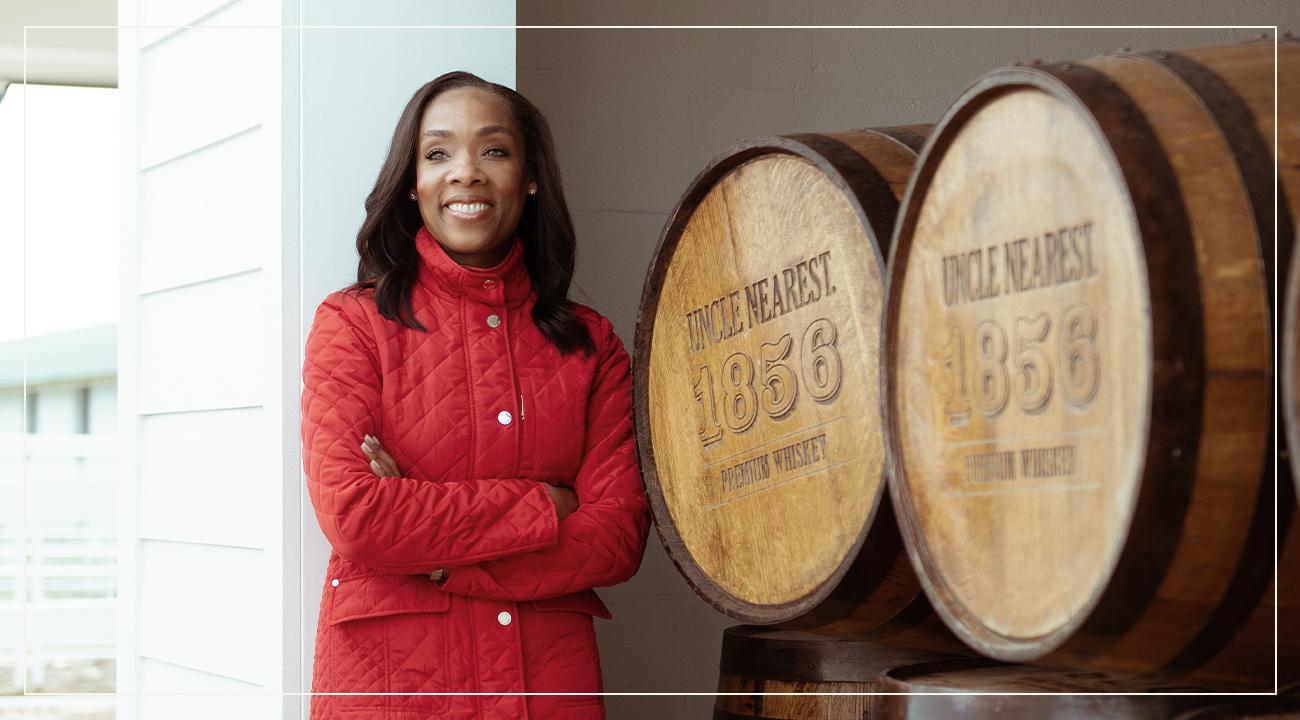 Tell us more about Uncle Nearest.

Fawn: Uncle Nearest is the fastest growing independent American Whiskey brand in U.S. history. We launched in July of 2017 — we're actually going to celebrate our three-year anniversary on July 19. And within the first two years, we were in all 50 states and in 10 countries outside of the United States. That's literally never happened. And so, it is very different, it's very unique.

I learned about the story from the cover of the New York Times’ international edition.

Nearest Green was the first African American master distiller in the U.S. — the first known.

We have such a remarkable story around the legacy of Nearest Green, that it was important that the juice in the bottle was as outstanding as the story itself. We worked really hard to make sure that happened, and I think everybody is recognizing that.

Uncle Nearest has a legendary and impressive history — please tell us about that.

Fawn: Nearest Green was the first African American master distiller in the U.S. — the first known. There were plenty of African American distillers or black distillers, but we still don't know their names. And Nearest Green, it was a different and rare situation in that he was given charge over the steel. In most instances, slaves were working for someone in steel who oversaw them. In Nearest's case, the preacher and distiller who owned the distillery were trying to separate out his worlds, meaning he married a teetotaler and he had separate properties.

Our master blender is a descendant of Nearest Green.

You played a big part of uncovering and recording this story. How did you come across it?

Fawn: Well, you know, I wish I had that answer. I can tell you that I'm a big believer that everything happens for a reason and all paths lead to where you're supposed to go. And so for me, I learned about the story from the cover of the New York Times’ international edition when I was in Singapore. I read that instead of the white preacher and distiller who had previously been credited with teaching Jack how to make Whiskey, that it was more likely his slave. I've now come to know Dan Call's family quite well and I've also done a lot of research on him. He himself did not own any slaves. However, there were slaves on his property doing work. 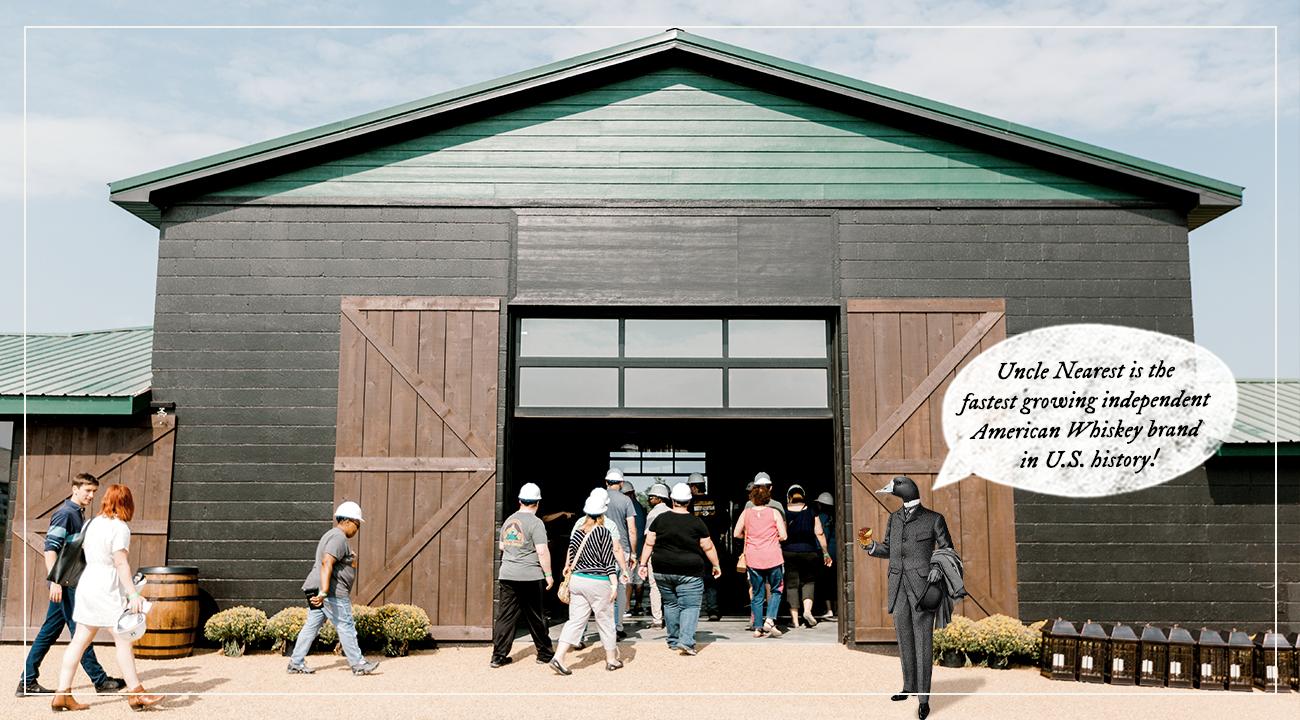 The only thing that we can logically conclude is that he was renting them. And that was common. People don't know about it, but someone else would own the slaves and rent them out for a specific fee. We don't know why Nearest was there. We don't know who actually owned Nearest. We only know that he was, in fact, there on the property.

The thing that was fascinating is that it was very much like folklore. Not folklore — oral history, I should say. Nothing in the article was proven out. Even the descendant of Nearest Green, who was asked how he was related to him in the article, said "I don't know, my mama just told me I was kin." Well, I've now done their whole family tree. He's actually not kin by blood at all. He's actually two degrees removed.

Nobody was going to deter me from what I was looking to do.

But the thing that I love about the journalist for the New York Times is he had enough information to put it out there with the hopes of someone else picking up the story and bearing it out. He said, "I lobbed it up and hoped that somebody would take the ball and finish it." And so that ended up being me. Now, why I was drawn to this particular story, I have no clue. I just know that I was and I dove in, and the rest is history.

1. If you could have one superpower, what would it be?
Oh, for money to rain down every place where people are in poverty.

2. How would you describe Uncle Nearest in three words?
Love, honor and respect.

4. What would you eat and drink for your last supper?
If it's my last supper, it's my father's chicken and dumplings. Oh, yeah.

Tell us about Uncle Nearest products. What makes them special?

Fawn: We have three different products. Our very first one was Uncle Nearest 1856. And the reason for the year 1856 is that is the year that we believe that he began teaching Jack how to make Whiskey. According to Jack's biography, he was eight years old when he came to the distillery and was introduced to Nearest Green. Well, we now know that Jack was born in 1848. So that would be 1856. It's also the year that Dan called Mary, the teetotaller, and so that is likely also the year that the steel would have been turned over to Nearest. That's 1856 — it is a combination, it is a blend of eight to 14-year-old Whiskey. 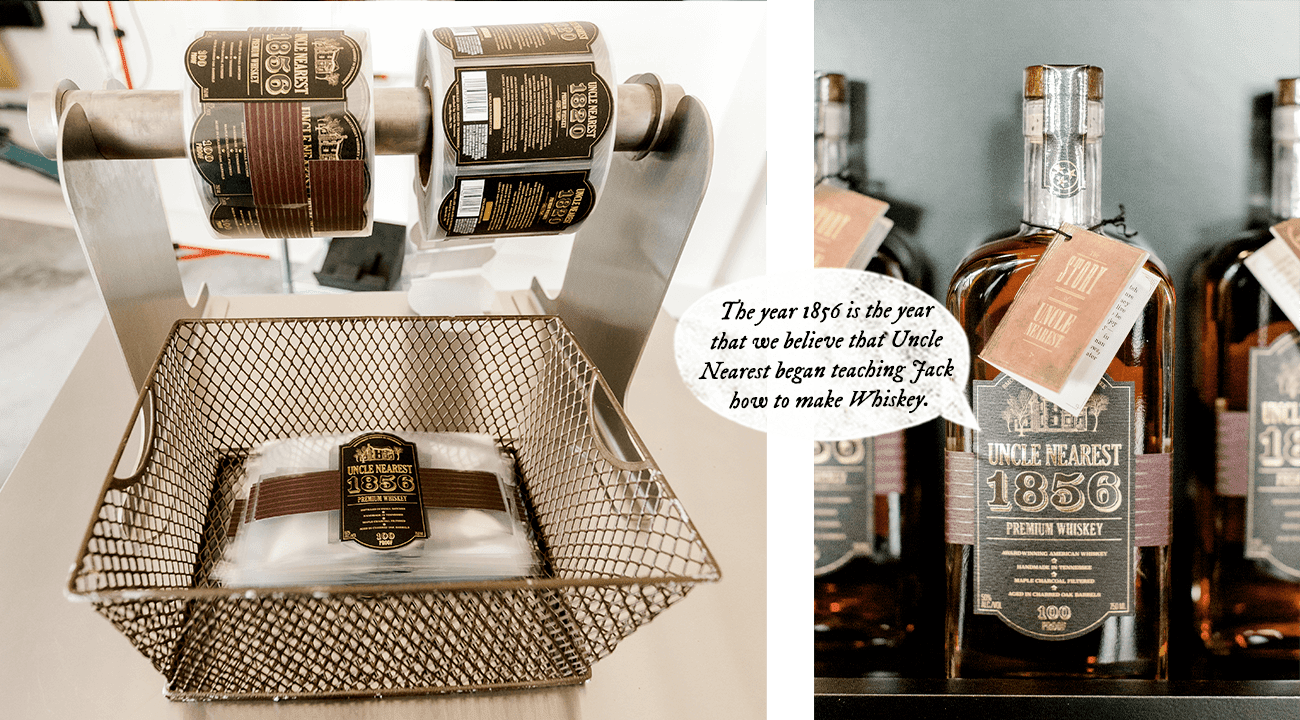 Our head of Whiskey operations, ironically, was the head of Whiskey operations for Jack Daniel's. That's actually her family. And so, it's very interesting because our master blender is a descendant of Nearest Green. So you have those two lineages that are working side by side to make sure that the product that we put out is absolutely phenomenal. So that's the 1856.

Our seven-year-old, which is the Uncle Nearest 1884, that’s a small batch. I hand select every single barrel, and Victoria Eady Butler — who's our master blender and fifth generation Nearest Green descendant — tastes every single one and determines what goes in the bottle based on her palate. She likes sweeter juices, so she prefers more caramel and toffee notes. So you get a lot more of that in our 1884, because that is 100% based on her palate, which I love. 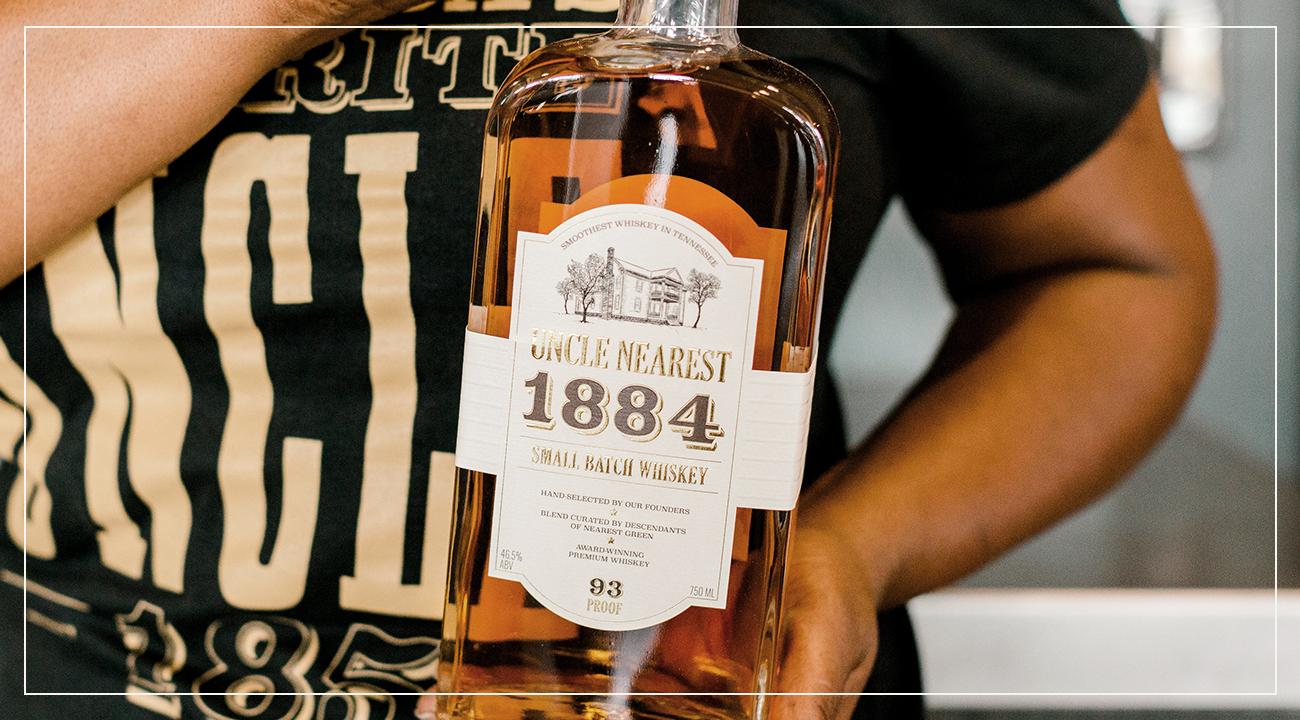 And then we have our unicorn, our 1820. People travel 15 hours round trip to the distillery because it's the only place we sell it. And every now and again, we will allow a store somewhere in the country to sell it. But it's very, very rare. And we don't generally do partnerships with anyone on these single barrels. You really have to come to the distillery in order to get it. And that one is a minimum of 11-years-old. So some of them have 15-year-old juice in it, but on the label it says 11-year-old because that's the minimum age it has to be. That's my favorite one.

Fawn: Oh, a steak. But in all fairness, I'm gonna ask for a steak with pretty much everything. I'm a steak and potatoes girl. Give me a bone-in ribeye and garlic mashed potatoes — that is what I'm going to recommend with every Whiskey.

It seems like a big responsibility to be shepherding and preserving such an important history. What does that feel like?

Fawn: I find it a great, great honor. I think that one of the things that we have done in a situation like this, where this history was uncovered, and it's really the history of another world famous brand, and you're kind of in the middle of it. And most scenarios, I think that it would be sort of a negative type of relationship where you literally have someone coming in and telling your history. 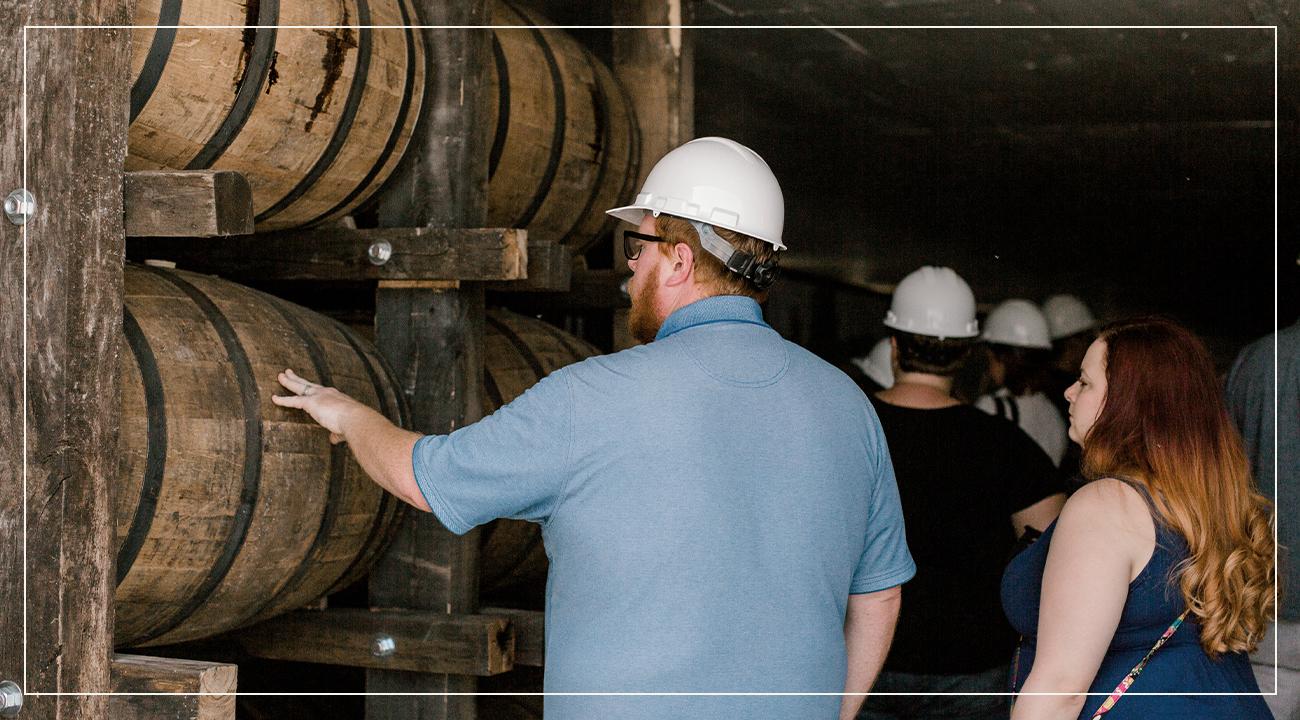 But because of the legacy of Nearest Green and Jack Daniel, and that remarkable friendship, I was absolutely adamant that this brand was going to be built on the basis of love, honor and respect, and that everything that we did, everything, from top to bottom was going to honor not just Nearest, but also honor his people, and the relationships he had. And so we've built this brand very, very differently.

I've come into a room to sit down on a panel with other CEOs, and I talk exactly the same as they do in terms of level of success, and it's like, who does this chick think she is?

We give away pretty much as much as we make. It's very rare. When we had a tornado hit in Nashville, in early March, immediately I knew restaurants were hit. That meant that there were going to be servers and bartenders that woke up that day with no job. Through our Nearest Green Foundation, tracked down every single bartender that had lost their job, and then we reached out to one of the nonprofit's up there and we said, "Hey, we wanna put money in every single one of these pockets.” And so that happened, then two weeks later, the pandemic hits.

I got N95 masks for our team very early on, I ended up discovering different brokers and things that had these masks that the hospitals needed, and so I began reaching out to the brokers and saying, "Hey, how many masks do you have? I have this hospital, that hospital."

What’s it like being an African American owner of a Spirits brand and building a company in this industry?

Fawn: My experience, personally, has been fantastic. I'm an absolute bulldog. Nobody was going to deter me from what I was looking to do. I'm sure that there were roadblocks that some folks may have otherwise tripped over. I'm like, "listen, if it's a hurdle I'm gonna run under or I'm gonna jump over it. But either way I'm getting through it." All that is to say I'm just built differently.  I think that if someone were on the outside looking in, I've probably had a great number of challenges in this industry. But because I don't focus on the challenges, and I focus on the solutions, I couldn't name any of them for you.

But in terms of just the enormous responsibility of cementing this legacy in an industry that has predominantly been white and male, it's been interesting, but I think it has been wonderful because I'm a big fan of first. I've come into a room to sit down on a panel with other CEOs, and I talk exactly the same as they do in terms of level of success, and it's like, "who does this chick think she is?" It’s because I understand why I'm here. I understand my purpose. It is not to build a company and try to sell it, it's to build a company that's for generations to follow. What I do, what I say, how I do things, how I say things, it's because I care about what I'm passing on with this company.